‘It’s irresponsible and it’s dangerous’: Experts lay in to Donald Trump after he suggested injecting people with disinfectant to treat coronavirus as Joe Biden joins outcry and says president should focus on testing and more PPE

The medical community has slammed  President Donald Trump after he suggested injecting people with disinfectant could treat coronavirus.

During yesterday’s White House press briefing, citing new research delivered by senior Homeland Security science and technology advisor William Bryan, the president said it ‘would be interesting’ to see if mainlining disinfectant into the lungs could eradicate the pathogen.

Pulmonologist and disease specialist Dr Vin Gupta warned the public on NBC News that Trump’s idea could lead to death.

‘This notion of injecting or ingesting any type of cleansing product into the body is irresponsible and it’s dangerous,’ he said.

‘It sounds interesting to me,’ Trump said Thursday, telling reporters he queried an official about whether cleaning agents could be injected into patients to fight the coronavirus

‘It’s a common method that people utilise when they want to kill themselves.’

Gupta added that even small amounts of disinfectant can kill when consumed and that it was depressing hearing the White House spouting such dangerous ideas.

He also accused the president of proposing unproven treatments. 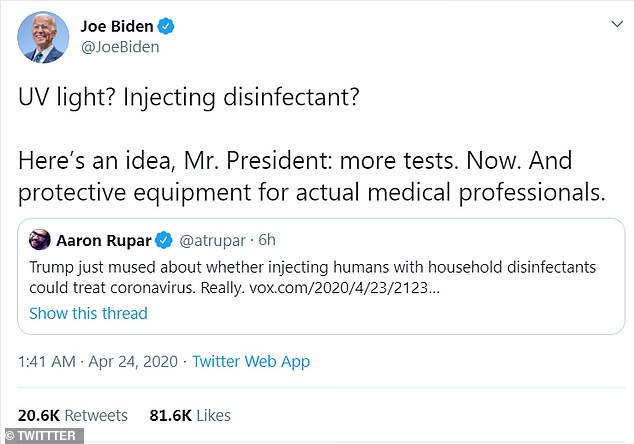 Trump’s challenger in the upcoming 2020 election Joe Biden also chimed in, advising the president to focus on testing and PPE rather than spouting wild theories

The government’s own Food and Drug Administration warned against the consumption of products containing disinfectants last year after a spate of deaths after people drank a so-called Miracle Mineral Solution, which circulated as a fix for a variety of ills on social media.

John Balmes, a pulmonologist at Zuckerberg San Francisco General Hospital, added to Gupta’s warning that even inhaling chlorine bleach ‘would be absolutely the worst thing for the lungs’.

‘The airway and lungs are not made to be exposed to even an aerosol of disinfectant,’ he told Bloomberg.

‘Not even a low dilution of bleach or isopropyl alcohol is safe. It’s a totally ridiculous concept.’

Online, doctors banded together to warn the public against the practice.

Kashif Mahmood, a doctor in Charleston, West Virginia, tweeted: ‘As a physician, I can’t recommend injecting disinfectant into the lungs or using UV radiation inside the body to treat Covid-19.

Another bizarre cure suggested by Trump yesterday was to somehow radiate the body with UV light after research found that exposure to sunlight and heat killed the pathogen. 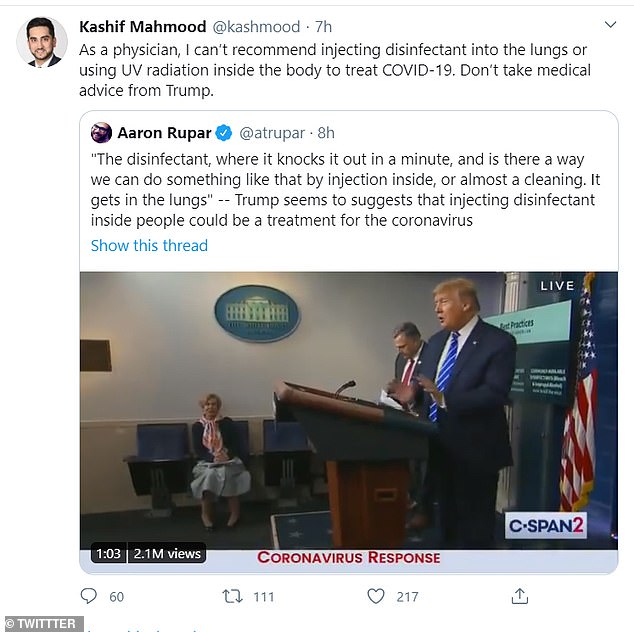 According to NBC, the US Centers for Disease Control and Prevention was forced to warn Americans not to consume cleaning products last week.

‘Calls to poison centres increased sharply at the beginning of March 2020 for exposures to both cleaners and disinfectants,’ the agency’s weekly morbidity and mortality report.

The agency’s website says: ‘The FDA has received reports of consumers who have suffered from severe vomiting, severe diarrhoea, life-threatening low blood pressure caused by dehydration, and acute liver failure after drinking these products.’