The Chapel of St Erasmus was built at a section of Westminster Abbey in the late 1470s under order of Elizabeth Woodville, wife of King Edward IV and Queen consort, also known as the ‘White Queen’.

Experts say the chapel was likely used by the White Queen and other members of the royal family to worship St Erasmus, a Christian saint and martyr.

The chapel likely contained gruesome images of the saint’s death, as well as one of his teeth, among other relics that were stored there.

The Chapel of St Erasmus was used for royal burials and to house the abbey’s relics of St Erasmus, a Christian saint and martyr, before being demolished at the beginning of the 16th century. Evidence from the new study has helped to create a visual 15th century reconstruction of the east end of the church and its furnishes (pictured) 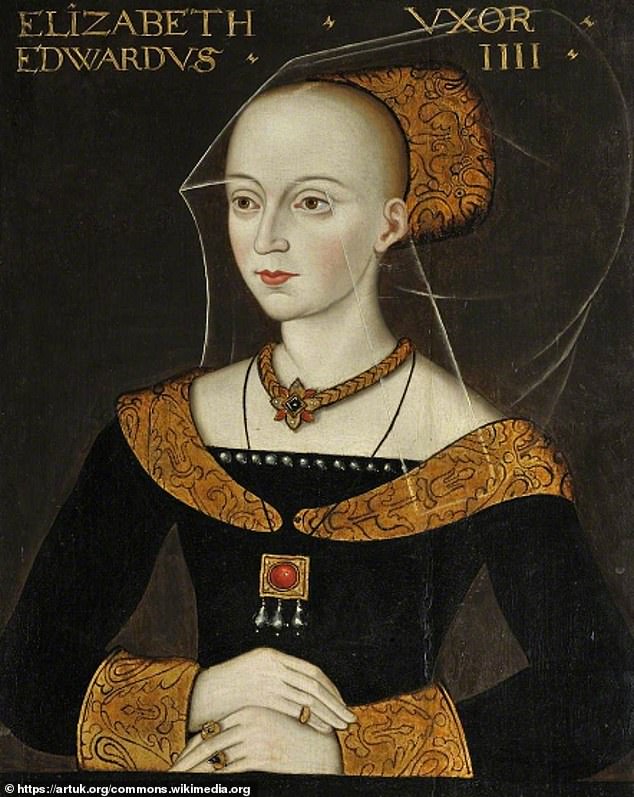 Elizabeth Woodville, wife of King Edward IV and Queen consort, is now also known as the ‘White Queen’. She was the grandmother of Henry VIII

The Chapel of St Erasmus had been in existence for less than a quarter of a century before it was demolished in 1502.

What was the Chapel of St Erasmus?

The Chapel of St Erasmus was a short-lived chapel at Westminster Abbey in London.

It was built in the late 1470s at the behest of Elizabeth Woodville, wife of King Edward IV and Queen consort.

The Chapel of St Erasmus was demolished in 1502 to make way for Westminster Abbey’s Lady Chapel, a burial place of 15 kings and queens.

Now, all that remains of St Erasmus chapel is an intricately carved frame, sculptured out of the mineral alabaster.

Visitors to Westminster Abbey can still the remnant by looking above the entrance to the chapel of Our Lady of the Pew in Westminster’s north ambulatory.

This frame would have surrounded a ‘reredos’ – the decoration behind the alter – in the chapel.

The study speculates that this decoration likely depicted St Erasmus being disembowelled – tied down alive to a table while his intestines were wound out on a windlass (a rotating cylinder often used on ships).

Little has been known about the role of Chapel of St Erasmus historically, but the new study presents all available evidence, including a newly discovered, centuries-old royal grant, to reveal more.

‘Very little attention has been paid to this short-lived chapel,’ said John Goodall, member of the Westminster Abbey Fabric Advisory Commission and one of the authors of the new study.

‘It receives only passing mention in abbey histories, despite the survival of elements of the reredos.

‘The quality of workmanship on this survival suggestions that investigation of the original chapel is long overdue.’ 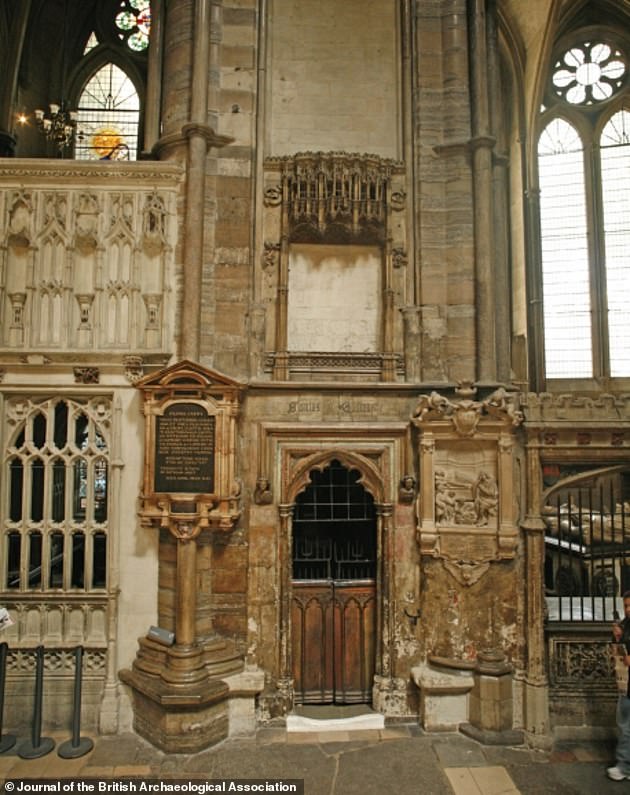 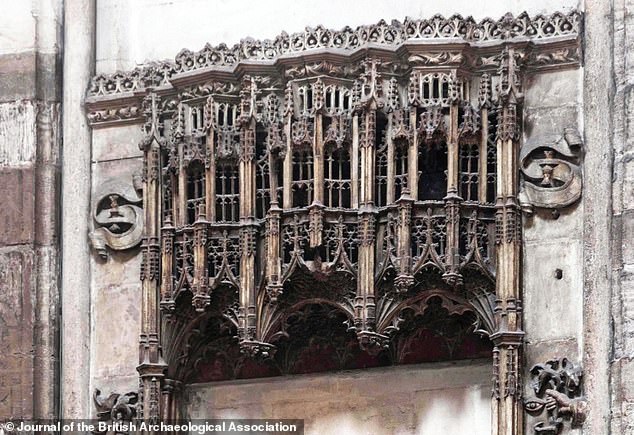 Upper part of the St Erasmus reredos, Westminster Abbey. The study speculates that a long-lost part of this decoration depicted St Erasmus being disembowelled

Elizabeth Woodville, wife of King Edward IV and Queen consort, is now also known as the ‘White Queen’. She was the grandmother of Henry VIII.

A woman of great beauty, she was already a widow with two sons when Edward IV married her in May 1464.

The match was repugnant to the ruling nobility of the House of York because she was a daughter of the Lancastrians, the traditional enemies of the Yorkists, and because she was not of royal rank.

Her penchant for procuring high offices and titles of nobility for her relatives increased her widespread unpopularity.

Within three months after the death (on April 9, 1483) of Edward IV, however, Gloucester had defeated Elizabeth’s party and seized the throne from Edward IV’s son and successor, the 12-year-old Edward V.

It is not entirely clear why Elizabeth, who had taken sanctuary, surrendered her younger son (on June 16) and later her daughters to Richard III. Soon both sons disappeared from Richard’s custody, presumably murdered.

In 1487 Elizabeth was disgraced, probably for treasonable activities, and forced to withdraw to a convent, where she died five years later in 1492.

Their eldest child was Elizabeth of York, who would marry Henry VII and give birth to Henry VIII, one of the most famous monarchs in history.

In the 1470s, the so-called White Queen commissioned the building of Chapel of St Erasmus, likely based on a design by architect Robert Stowell.

Stowell may have helped salvage the chapel’s most ornate pieces when it was knocked down after less than 25 years.

What the chapel looked like is ‘inevitably a matter of speculation’, the experts say, although it could have been a semi-octagonal shape, much like a section of Hereford Cathedral.

According to Goodall and study co-author Westminster Abbey archivist Matthew Payne, the Chapel of St Erasmus was a place of devotion to the ‘cult’ of the disembowelled saint, but also a royal burial site.

Among those interred there was eight-year-old Anne Mowbray, child bride of Elizabeth’s son Richard, Duke of York.

Anne Mowbray wed Richard in 1478 when they were both still infants, but they both sadly died a few years after the wedding.

St Erasmus was responsible for child wellbeing as well as being the patron saint of sailors and abdominal pain, so his link with children may have prompted the building of the chapel.

‘The dedication of the chapel to St Erasmus reflects a new and rapidly growing devotion to his cult in 15th-century England,’ the authors say.

‘In the second half of the 15th century his cult became very popular throughout southern England, with significant altars and images dedicated to him at Faversham in Kent, in All Saints, High Wycombe, in St John’s, Glastonbury and elsewhere.’

Although its precise location is unknown, the chapel was almost certainly built on space formerly allotted to a garden and near stalls where English merchant William Caxton sold his wares, according to the authors. 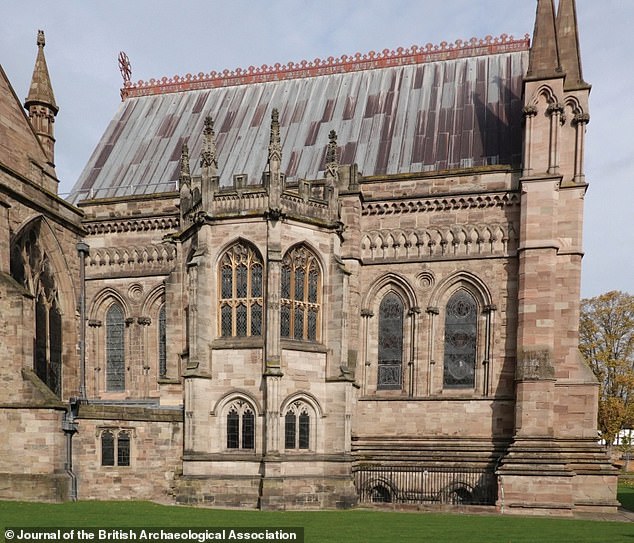 The Chapel of St Erasmus may have been semi-octagonal in shape, much like a section of Hereford Cathedral (pictured) 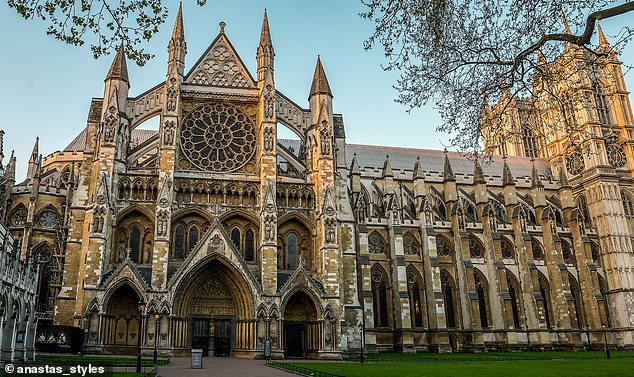 Although Westminster Abbey (pictured) was founded in 960AD, the building we see today dates from the reign of Henry III in the 13th century

Ultimately, the demolition of the chapel was on the orders of Henry VII, to make way for his and his wife’s chantry and burial place.

The Lady Chapel that replaced it features a statue of St Erasmus, which the authors say may be a nod to the now long-forgotten chapel.

Despite her links to Westminster, after her death in 1492, the White Queen was buried with her husband King Edward IV at St George’s chapel, Windsor Castle.

Since then, monarchs that have also been buried in St George’s include Henry VIII, George V and Elizabeth II following her death in September.

The new study has been published today in the Journal of the British Archaeological Association.

WHO WAS EDWARD IV?

Edward IV was twice king of England during his lifetime and lived from (1442 – 1483). He is the older brother of Richard III.

He was born on 28 April 1442 at Rouen in France, the son of Richard Plantagenet, Duke of York.

Edward’s father the third Duke of York lead the dynastic struggle against the Lancastrians known as the Wars of the Roses, which began in 1455.

After he was killed at the Battle of Wakefield in 1460, Edward inherited his claim.

With the support of the powerful Earl of Warwick, Edward defeated the Lancastrians in a series of battles.

Warwick believed he could continue to control the new king. He was keen to negotiate a foreign marriage for Edward, but in 1464 Edward secretly married Elizabeth Woodville, a commoner.

Warwick was furious, leading a revolt against the king. Warwick and Clarence then fled to France, where they joined Margaret of Anjou, wife of Henry VI.

Margaret’s Lancastrian army invaded England in September 1470. Edward fled to the Netherlands until March 1471, when he and his brother Richard, Duke of Gloucester, returned to England.

Edward defeated and killed Warwick at Barnet before defeating the Lancastrians at Tewkesbury in May.

Henry VI was put to death in the Tower of London.

The second part of Edward’s reign, from 1471 to 1483, was a period of relative peace and security.

He used income from the Crown Estates to pay governmental costs, and was therefore less in need of parliamentary grants than his predecessors – he called parliament only six times.

Edward died on 9 April 1483. His young sons, Edward and Richard, were left in the protection of their uncle Richard, Duke of Gloucester.

Richard housed them in the Tower of London where they were probably murdered on his orders.

Parliament requested that Richard take the throne and he accepted, being crowned Richard III.