Experts warn melatonin use in America is ‘out of control’

Experts are warning that increasing usage of melatonin is both children and adults in the U.S. has gotten out of hand, and could lead to a spate in cognitive and psychiatric issues down the line.

A report from JAMA Wednesday warns that melatonin use has jumped five-fold since the start of the century with more than two percent of U.S. adults now using the drug regularly. More-and-more are also using more than a five milligram dose each night – the recommended maximum amount for a majority of people.

While many consider the sleep-aid to be relatively harmless, some experts fear that it could lead to cognitive and psychological issues later in life. Officials are also reporting surges in poisoning cases among children who took too much of the drug at once.

Popularity of the over-the-counter drug is only increasing over time as well with yearly sales increasing from $331 million in 2017 to $821 million in 2020 – meaning even more people are likely using the drug in dangerous ways.

‘It’s a crazy situation that has gotten out of hand,’ Dr Judith Owens, director of the Center for Pediatric Sleep Disorders at Boston Children’s Hospital, said in a JAMA report.

Unlike other many other countries, melatonin is distributed over-the-counter in the U.S. instead of as a prescription. It is also well known that it is a naturally occurring substance in people.

This has led many to believe that it is safe to use with little regard for the long-term ramifications of over use – unlike other prescription drugs like Tylenol where a person may understand limits as to how much it should be ingested.

While melatonin is safe to use on occasion, it is like every sleep-aid in that doctors do not recommend a person use it to sleep every night (file photo)

‘It’s a bit alarming; just because the product is available over the counter doesn’t mean it is totally harmless and doesn’t have important physiological effects,’ Dr Naima Covassin, from the Mayo Clinic College of Medicine and Science in Rochester, Minnesota told JAMA.

Little is known about the long-term impacts of melatonin supplements. They are relatively new to the market and widespread use was not adopted in much of the world until very recently.

As a result, the overall impacts of them are not known. If there are long-term issues associated with them, though, then the world is set to find out in a big way. 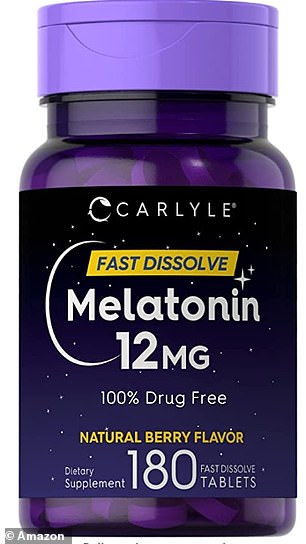 Experts are warning that many Americans are taking more than the maximum reccomended amount of 5 mg of melatonin each day – and that it could lead to significant cognitive issues down the line. Pictured: An over-the-counter melatonin product that has a dosage of 12 mg

The National Institutes of Health, along with others, have tied the drug to dementia and a slightly shorter life-span, though there is no conclusive research to demonstrate the case.

There is also data on other sleep-aids that show overuse or misuse of them can eventually lead to significant cognitive decline or psychiatric issues later in life.

Researchers in a Mayo Clinic study published in March wrote that everyone who uses the drug now is in effect taking part is a massive study.

‘The growing use of exogenous melatonin in the general population and its expanding therapeutic potential provide impetus for the acquisition of robust evidence of long-term safety of melatonin supplementation,’ they wrote.

Melatonin is a hormone which controls how asleep or awake people feel.

The hormone is produced in the pineal gland in the brain and its release into the body is controlled by light.

During the day, when the eye absorbs light, melatonin levels in the body are low and, as a result, we feel awake.

But when darkness settles and the amount of light being absorbed by the eye reduces (although this is disrupted in modern societies because of artificial light), more melatonin circulates round the body.

Melatonin prepares the body for sleep by slowing the heart rate, reducing blood pressure, and changing how heat is stored in the body – the body’s core temperature drops while the outside of the body and the limbs become warmer.

Melatonin supplements can be taken to aid sleep in people who have problems with it, as well as for certain medical conditions such as tinnitus or Alzheimer’s disease.

Even people who believe they are taking safe amounts of the drug could be misinformed.

Since the drug is not regulated by the Food and Drug Administration, there is potential that doses are higher than advertised, meaning someone is taking more of the drug than believed.

‘These estimates may raise safety concerns, especially given that the actual content of melatonin in marketed supplements may be up to 478 percent higher than the labeled content and that evidence supporting melatonin use for sleep disturbances is weak,’ the Mayo Clinic researchers wrote.

Because of these fears, no sleep-aides are recommended to be used long-term without trying other sleep therapies first.

‘There aren’t any medications recommended for long-term use for insomnia in children or adults,’ Dr Jennifer Martin, a professor at the University of California, Los Angeles, told JAMA.

‘We always try nonmedication approaches first, and for most people, that works.’

Many people understand the risks of sleeping pills, and it even pushed them towards the perceived-to-be-safe melatonin, experts note.

Another major fear is that children will get their hands on them and use them unsafely in ways that will get them sick.

Because many melatonin supplements are gummies, a child may falsely believe they are candy and eat a large amount of them.

The experts told JAMA that many parents who want their child to take melatonin may also say that it is candy. While that may make bedtime a little more hassle-free, experts warn it could give their child a dangerous misconception about melatonin.

Earlier this year, the Centers for Disease Control and Prevention warned that 4,000 kids were hospitalized for melatonin-related causes over the past decade. Two cases resulted in death.

The drug is not totally useless, though. Experts say they are great in rarer situations where a person needs to quickly adjust their sleep schedule – like to fix jetlag after travel.

It can also be used as an occasional sleep aid for a person who is in fear of missing important sleep on a particular night – like other types of sleep aids are used.