Hugh Hefner’s death certificate has revealed that the 91-year-old former editor of Playboy passed away in part because of a drug-resistant E. coli strand.

Public health officials have emphasized the dangers of drug-resistant infections for years now, as increasingly more bacteria strands have become tolerant of man-made antibiotics, including those that lead to STDs and meningitis.

If a doctor can no longer treat an infection with antibiotics, alternative treatments are often too costly or toxic, but often no other treatment paths exist and patients die from infections that could previously be combated with drugs.

Because of the growing crisis, experts have urged doctors to avoid prescribing antibiotics unless they are crucial, as over-prescription strengthens bacteria against the life-saving drug treatments.

Hugh Hefner’s death certificate revealed that respiratory failure, cardiac arrest, septicemia and an E. coli infection contributed to his death. Hefner is pictured here at the launch of a Playboy menswear collection in California 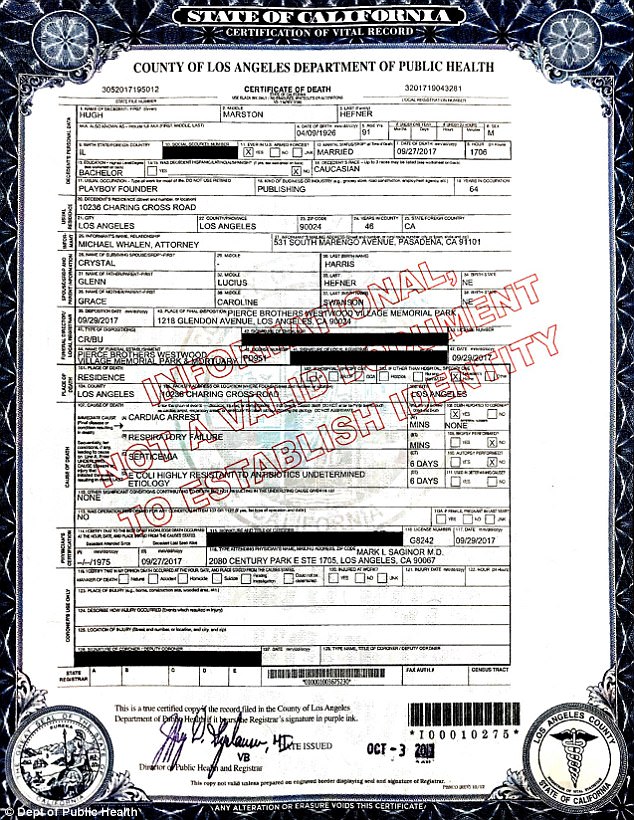 The E. coli infection that contributed to Hefner’s death was resistant to antibiotics. Experts have been warning about the dangers of drug-resistant infections for years. Hefner’s death certificate is pictured here

E. coli bacteria live in the intestines of animals and humans, and most of the time they either do no harm or cause only minor symptoms, such as diarrhea.

While healthy adults can easily recover from E. coli infections, older people and children have a harder time doing so, and might develop an incurable form of kidney failure as the result of an infection.

E. coli infections can be treated with antibiotics, but the bacteria that cause them will eventually find ways to resist the man-made drugs, which means that humans will no longer be able to successfully use them to treat illnesses.

When a patient’s infection cannot be treated with antibiotics, often they experience the effects of their infection for a longer amount of time.

Examples of infections that have become resistant to antibiotics include sexually transmitted diseases, meningitis and respiratory tract infections, including pneumonia.

The FDA has labeled antibiotic resistance a ‘growing public health concern worldwide’, as the World Health Organization and the UN scramble to come up with solutions.

‘Today, almost all bacterial infections in the US and throughout the world are becoming resistant to antibiotics…The smart use of antibiotics is key to controlling the spread of resistance,’ the FDA has said.

WHY IT IS IMPORTANT TO PROPERLY TAKE ANTIBIOTICS

Antibiotics were discovered in the 1920s and are used to treat bacterial infections, such as strep throat.

However many doctors frequently prescribe them for viral infections, which they cannot treat.

Following the exact directions you receive when you are prescribed an antibiotic is of the utmost importance in battling antibiotic resistance.

The following are the FDA’s instructions for using antibiotics safely:

The CDC has warned that nobody is completely safe from antibiotic-resistant infections, which are hard to treat, often because alternative treatments are less safe for patients’ bodies.

Because antibiotic resistance is growing, public health officials are constantly urging doctors to only prescribe antibiotics if they are completely necessary. Even so, recent research has proven that the drugs are often prescribed for viral infections, which they cannot treat.

According to the FDA, misuse and overuse of antibiotics are the two factors that drove the resistance crisis.

The CDC and FDA have partnered to launch a campaign aimed at educating people about properly using antibiotics.

One of the campaign’s components is teaching people about which ailments can and cannot be treated with antibiotics.

In addition to this, pressure has been put on restaurant chains that serve meat that comes from animals who were given antibiotics before they were killed, as this can lead to greater antibiotic resistance.

McDonald’s has stated that by 2027 they hope to serve no food that has been treated with antibiotics that the World Health Organization deem are crucial for human medicine, thus reducing the threat of antibiotic resistance.

The company has labeled drug-resistance as ‘an important issue for people and animals’.