RAF pilots trained there for the legendary Dambuster mission. Now… it’s a dam fine spectacle. Exploring a stretch of the Peak District that played a celebrated part in Britain’s war effort

By Angela Epstein for the Daily Mail

At a little before 9.30pm on Sunday, May 16, 1943, the first of 19 Lancaster bombers took off from RAF Scampton, Lincolnshire in one of the most daring missions of World War II: to bomb dams and power plants in Germany’s industrial heartland.

Codenamed Operation Chastise, the audacious night-time raid would be carried out by the 133 men of the RAF’s 617 Squadron — the famous Dambusters — formed only two months before.

It would involve flying just 60 ft above reservoirs to drop specially developed ‘bouncing bombs’. These would skim across the surface of the water before sinking, exploding and bursting the dams.

The crews would carry out the mission in aircraft fitted with a revolutionary altimeter, made of two spotlights. It was angled so the beams converged at exactly 60 ft below the aircraft so that correct height was maintained.

However, practice would be vital if the mission was to succeed. Which is how a spectacular stretch of the Peak District National Park came to play a part in this celebrated piece of wartime history.

It is home to three Gothic-style dams, which span the River Derwent and form the Ladybower, Derwent and Howden Reservoirs.

The Derwent Dams and their reservoirs were built in the early 20th century to supply water to Derbyshire, South Yorkshire, Nottingham, and Leicester. And as they closely resembled German dams, they also proved the perfect place for the Dambusters to practise low-level flights. And today, thanks to bike and hiking trails which run by the water and into the wooded hillsides and valleys — there is space for all.

Mind you, although it’s midweek when we visit, the main car park at Fairholmes, off the A57 Snake Pass between Sheffield and Glossop, still thrums with activity while ducks drowse in the shade of overhanging trees, stirring only to be fed by excitable children.

Walkers, like us, enjoy a coffee from the refreshment kiosk before setting off on a keen march along the water banks or into the hills. 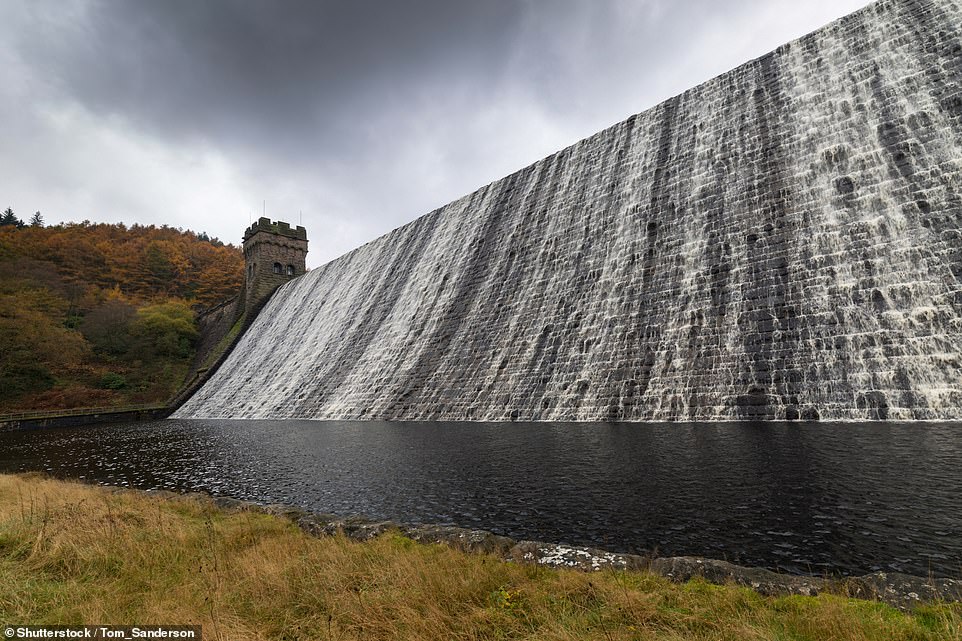 The three gothic-style dams span the River Derwent. Pictured is the Derwent Dam with its dramatic cascading water

Here and there, information boards detail the genesis of the dams, built by a 1,000-strong workforce who lived in a temporary ‘town’ of corrugated iron huts, known as Birchinlee or Tin Town.

To complete the project, villages were flooded — though some features were spared, like the 17th-century Packhorse Bridge, rebuilt at the head of Howden Reservoir.

Knowing the back story makes our first heart-stopping glimpse of the castellated dam all the more powerful. Huge, majestic, implacable, it towers over the water. 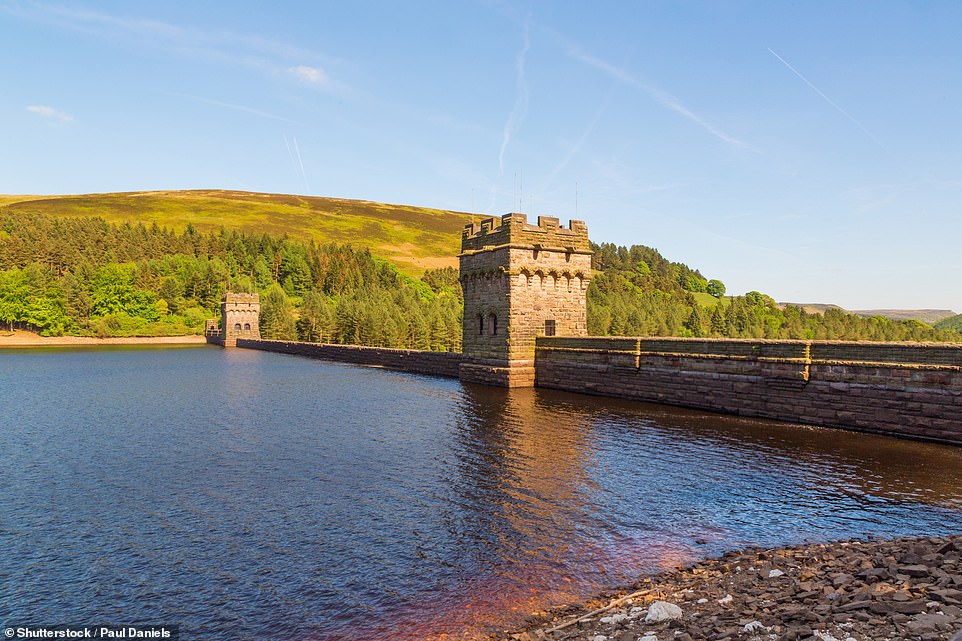 The dams and their reservoirs were built in the early 20th century to supply water to Derbyshire, South Yorkshire, Nottingham, and Leicester

The success of the Dambuster raid is still debated. Its impact on German industrial production was slight. However, it was an important morale-booster for war-weary Brits — even if it came at huge price. Of 133 aircrew, 53 were killed and three became PoWs.

Clearing away our picnic, we continue our walk and say a silent prayer of thanks for the brave men who once flew above.