Exploring the charms of Portrush in Ireland, home to the Open 2019 golf championship

Standing on the tee at Purgatory, the daunting 17th hole of the Dunluce course at Royal Portrush Golf Club, I took a deep breath and an almighty swing.

The ball sailed into the distance and – to my utter amazement – instead of turning sharply right with my usual hideous slice, it continued in roughly the right direction down the fairway.

It was a joy to play on this stunning course, located on the rugged coastline of northern Northern Ireland and where the views stretch across to Scotland.

And I couldn’t agree more with those experts who reckon the fifth hole, with its green set on the cliff edge, is one of the most scenic in the world.

Today on this hallowed turf, some of the best golfers on Earth will be battling to win the Open Championship and the chance to lift the famous Claret Jug, watched by a worldwide audience of more than 80 million viewers.

The local favourite was, of course, Rory McIlroy, who said that if he lifted the trophy on home soil, he might burst into tears. But sadly, there’ll be no emotional outpourings today, as Rory missed the cut on Friday – despite a valiant effort to get himself into the weekend play.

On my visit, Royal Portrush was a lot quieter than it will be today – there were just the four of us on the course. And I was happy simply to find my ball (and miraculously score a single par) on such a testing links course, which last staged the Open in 1951. 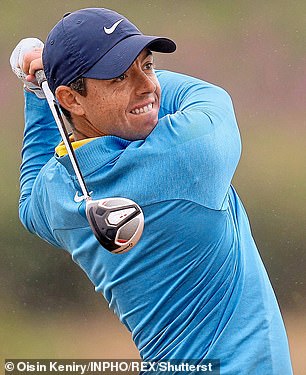 There is more to Portrush than just a golf course, however. It’s a small, charming seaside resort with a population of 6,500, and in Victorian times it was one of Ireland’s most fashionable summer destinations.

The opening of the Ballymena, Ballymoney, Coleraine and Portrush Junction Railway in 1855 introduced its glorious East Bay and West Bay beaches to the holidaying masses.

Hotels sprang up, including the Hydropathic and Golf Hotel, which was a hit with bathers and golfers alike. The hotel boasted that visitors could tee off within ten minutes of disembarking their train. During the Open, the town has been bustling with 200,000 visitors and the local economy has received an estimated £80 million boost.

When it is not hosting such a prestigious golf tournament, Portrush is obviously much quieter but it has other attractions, such as an array of antiques shops on Main Street, and Troggs Surf Shop, which caters for those who flock here to catch the excellent waves.

The welcoming Portrush Atlantic (portrushatlantic.com) and the family-run Adelphi (adelphiportrush.com) are the two best-placed hotels.

Look out for a marvellous vintage railway poster in the reception of the Adelphi that shows plunging white cliffs and an enticing beach with the slogan: ‘Come to Ulster for a better holiday.’ 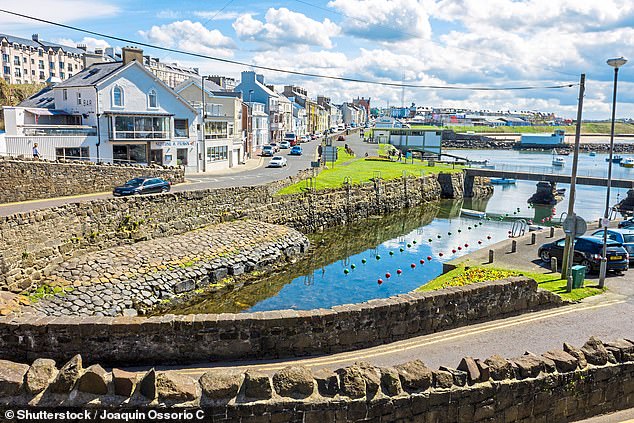 Appeal: The town’s port is a short walk from Main Street. Its stone steps are known as the Pilgrim Steps as they were used by people crossing the Atlantic for a new life in the New World in the 18th Century 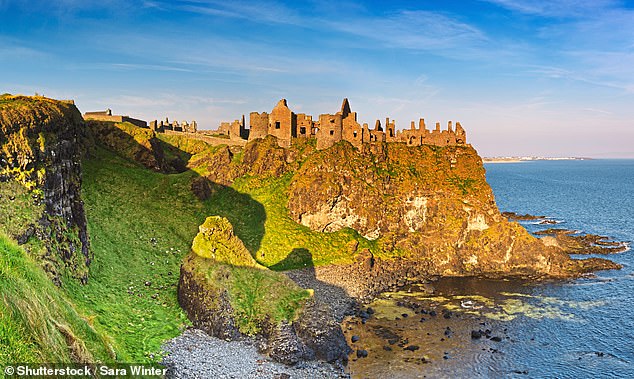 The dramatic ruins of Dunluce Castle. Game Of Thrones fans will recognise this dramatic fortification as the location for Castle Greyjoy in the series

A short stroll from Main Street is the port. Its stone steps are known as the Pilgrim Steps as they were used by people crossing the Atlantic for a new life in the New World in the 18th Century.

These days visitors are more likely to be attracted by Waterworld – a leisure centre with waterslides, a ‘bubble pool’ and an outdoor pool – or the Ramore Wine Bar or Harbour Bar pub. The latter is a local institution run by Willie Gregg, who has worked at the pub for 50 years and is a friend of Northern Irish golfer Darren Clarke, who won the Open in 2011.

Clarke lives locally and has given Gregg a replica of the trophy he was awarded for captaining Europe in the 2016 Ryder Cup. Inside the busy little bar, covered with old beer adverts and pictures of the harbour, customers can sip a drink from the trophy in exchange for a donation to charity – a ritual said to bring good luck to those playing golf the next day. 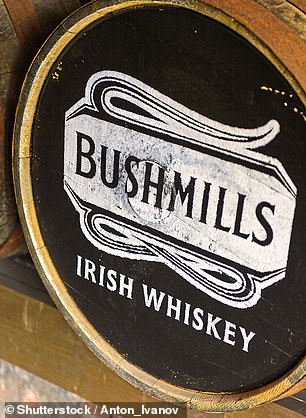 A barrel of Bushmills whiskey, which is made nearby

Keen walkers will love Portrush. From Ramore Head, it’s a glorious hike across East Bay beach, passing giant dunes that wouldn’t look amiss in the Sahara. Keep going and you reach a cliff path, where you can watch gannets diving into the inky-black water and the jagged outline of the ruins of Dunluce Castle rising in the distance.

Game Of Thrones fans will recognise this dramatic fortification as the location for Castle Greyjoy in the series. From Ramore Head, it’s about a four-mile walk to this medieval castle and a further five to the Giant’s Causeway, the extraordinary basalt columns that have become Northern Ireland’s biggest natural attraction.

What a fabulous walk! Water churned far below us as birdwatchers tracked gulls with their binoculars and long-distance hikers tramped happily by along the Causeway Coastal Route. Afterwards, we headed inland for a mile to Bushmills village to see Ireland’s oldest working whiskey distillery and to stop off at Bushmills Inn, a boutique hotel and former coaching inn dating from the 1600s.

With its fires, snugs and cosy corners, there can be few more pleasant places to rest after a day in Portrush – whether or not you’ve faced Purgatory on the golf course.

In the restaurant, we tucked into steaks, drank pints of Guinness and – like so many before us, no doubt – swapped our tales from the famous fairways. Then we relocated to the front bar and ordered more Guinness and a dram or two of the local stuff – and did it all again.

There is something about Portrush, with its ups and downs and splendid views, that seems to get your tongue wagging. It’s a slice of heaven that every golfer will love.