‘You better not be having sex with her’: Explosive texts between Sarah Budge and John Ibrahim lay bare their volatile relationship – and how the nightclub identity told her ‘shut up, I’m busy’ when she asked if he was cheating

Budge, 29, who was acquitted of gun possession charges this week, has been with her 51-year-old boyfriend for five years.

In court, Budge’s lawyer Simon Buchen SC said Mr Ibrahim had often treated his girlfriend ‘with contempt’ during their relationship.

Mr Ibrahim often said little in text messages presented to the jury, including ‘What’ when Budge called him an ‘a**hole’ for announcing live on radio he was single in July 2017.

Ms Budge went through a trying time before her trial when her mum became terminally ill and wanted comfort in knowing her partner was there for her.

‘Why are you being mean and ignoring me?’ she texted him on July 30.

The 29-year-old, who was acquitted of gun possession charges this week, has been with her 51-year-old boyfriend for five years

‘Please just chat to me,’ Ms Budge texted again the next day.

Five days before police raided her home, Ms Budge was horrified after coming cross an Instagram post of an unknown woman in Mr Ibrahim’s bedroom.

‘U better not be having sex with her… Call me when u done with her if u even remember to … why is she in your room anyway,’ she texted him.

‘It’s so unfair, I keep looking like a fool with these women all posting in your room … it does make me feel sad and confused.’ 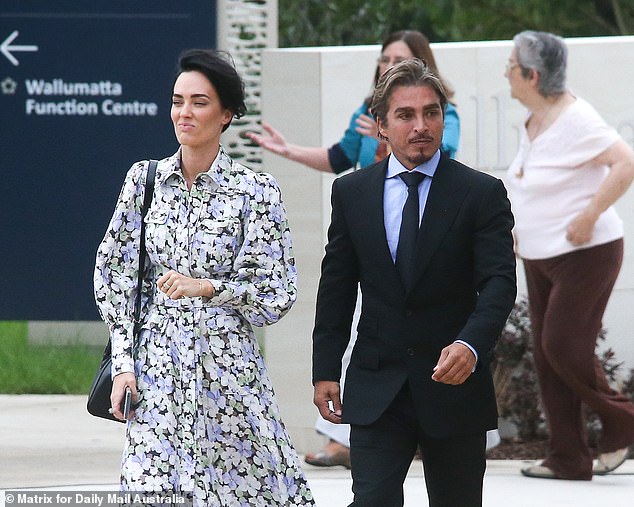 Despite the constant shutting up and ignoring she received, Ms Budge was still adamant on bearing John some children

Despite the constant shutting up and ignoring she received, Ms Budge was still adamant on bearing children with Mr Ibrahim.

‘This trip is my last hooray party trip then im popping out kids and become a yummy mummy, half model wifey cooking lamb chops and baking cakes for you lol hahah dreams,’ she wrote.

Police, who found the weapons in August 2017 during coordinated raids on homes linked to the Ibrahim family, and the prosecution were convinced Ms Budge knew the gun was there all along.

But late on Wednesday, the fourth day of deliberations, a Sydney jury of 11 people returned a not guilty verdict to unlawful gun possession.

Budge wept and shook as the jury was asked for their verdict on Wednesday before leaning into her hands in relief when ‘not guilty’ was announced.

That night, she and Mr Ibrahim enjoyed a celebratory dinner at a swanky Sydney restaurant.

The same jury on Tuesday cleared her of two other charges alleging Budge knew about the ammunition and that the gun’s serial number had been scratched out.