One of Britain’s largest exam boards failed to vet applicants approved to mark A-level exams this year, a Daily Mail investigation has found.

But the awarding body offered A-level ‘assessor’ roles to a reporter in two subjects in which she had no qualifications.

At no stage did OCR or its management company, Cambridge Assessment, check any of her claims, seek any references or verify any of the qualifications. The reporter was then added to OCR’s ‘approved assessor’ list.

OCR insisted last night that the reporter would have been put through ‘robust’ training and ‘standardisation’ tests before actually being given any papers to mark. But it did not explain why its staff had failed to check references before approving the application.

Despite arguing that their selection process was ‘robust’ Exam board OCR could offer no explanation as to how a reporter with a false CV was able to be hired, when she was turned down by other exam boards

By contrast, when the reporter applied to another exam board, AQA, she was turned down when she failed to provide proof of the alleged qualifications.

The findings raise serious questions over how rigorous OCR’s standards are when it comes to choosing exam assessors. They come two years after a warning about a shortage of examiners.

Last night Ofqual, the exams watchdog, said it was investigating. ‘We are closely reviewing the evidence provided by the Daily Mail,’ a spokesman said. ‘We will take appropriate regulatory action if we find our rules have not been met.’

On Thursday, thousands of A-level students discovered whether they had achieved the grades to enter their university of choice.

This year the percentage of A* and A grades awarded fell to its lowest point in 12 years after the exams were made tougher in order to fight dumbing down.

The job criteria stated that ‘we may consider non-teaching candidates’ and ‘specialist marking and moderating tasks do not require a reference’.

On the application CV she wrote that ‘he’ had studied at the exclusive Westminster public school, achieving three As.

She copied and pasted the university course descriptions in their entirety, as well as fabricating a teaching qualification. Despite not knowing a word of Latin, she was considered qualified to mark six different modules including Latin Language, Latin Prose Literature and Latin: Unseen Translation. A Cambridge Assessment portal shows the modules she was deemed qualified to mark.

For the history marking application, the reporter constructed a CV detailing a history degree from the University of Bristol. It contained one spelling and one grammatical error.

The reporter was subsequently approved to mark the A-level history module Russia 1894-1941. After applying online to OCR, both fake applicants received emails which said: ‘We are pleased to inform you that your application for the above has been successful. This approval means that you have met our selection criteria for this assessment activity.’ 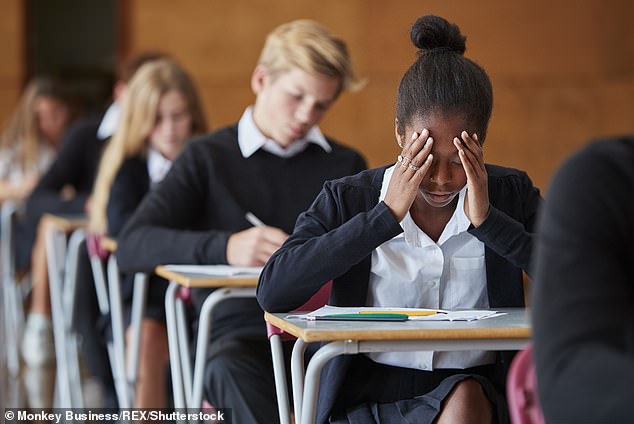 Thousands of students are put under immense pressure to succeed every year, but their results could be hanging on the word of an unqualified marker

Papers are given to examiners on an ad-hoc basis, and OCR states in its acceptance letter: ‘This does not guarantee we will be able to offer you an opportunity to undertake assessment services at this time. When an opportunity becomes available we will contact you.’

Both fake assessors were immediately given details of how to claim for expenses, and were put on the UCLES (University of Cambridge Local Examinations Syndicate) company pension scheme.

OCR also accepts assessors from overseas as long as they have a bank account in their country of residence. In some cases, Cambridge Assessment will even pay for flights ‘to and from a destination outside the UK’.

The Mail chose not to take the exercise any further so as not to jeopardise any candidates’ exam papers.

Last night, an OCR spokesman said: ‘To ensure high-quality marking, anyone who applies to mark for OCR receives robust training first. They are then required to go through further “standardisation” tests.

‘We are confident that the examiners who mark our papers have passed robust tests and that the quality of their marking is high.’

OCR exam assessors are informed that before marking papers, they must complete training via a portal and states that ‘the vast majority of training is now completed online’.

This usually involves online ‘standardisation’ – the marking of online practice papers to make sure that candidates receive grades which are neither too high nor too low. Once assessors pass this they proceed to ‘live marking’ of scripts accessed online.

The spokesman added that since July, it had introduced a new requirement for all UK applicants to provide identity evidence as part of their assessor registration process.

The paper by the Joint Council for Qualifications, representing exam boards and head teachers, said a recruitment drive was urgently needed.

Commenting on the Mail’s revelations, Mike Buchanan, chief executive of HMC, the membership organisation for leading independent schools, said: ‘These allegations are very concerning and anything which undermines faith in the system will require serious examination by Ofqual.

‘Marking in subjects such as history and languages can be particularly subjective, so it is extremely important that examiners are experienced, trustworthy and well managed.’

He added, however, that he felt that overall the exams system was well run.