Britain’s top boardroom chiefs pocketed an average of £4.4 million each last year – and were showered with perks, The Mail on Sunday can reveal.

For the top 20 earners in the FTSE100 pay league, the rewards were even higher – their packages were worth £178million between them last year.

And the MoS report reveals a trio of chief executives have joined the £100million club over the course of their careers as CEO.

The £100m men: Three bosses have racked up the enormous sum in their career as chief executive, from left, Erik Engstrom of publisher RELX, Rob Perrins of housebuilder Berkeley Group, and Pascal Soriot of drugs giant AstraZeneca

Conservative MPs say they fear the largesse will fuel social division and damage the reputation of business at a time when ordinary families are struggling with the cost of living crisis.

More than a tenth of the firms in the FTSE100 are on a Government list of shame after shareholders revolted over excessive rewards.

The register of investor protest was introduced by the Conservatives in 2017 amid concerns that corporate greed was damaging the capitalist system. However, firms in most cases simply ignore it and continue the largesse.

The Mail on Sunday can reveal:

Conservative MP Kevin Hollinrake, a member of the Treasury Select Committee, said: ‘I’m all in favour of the risk and reward system of remuneration, but it appears that many of these executives receive huge rewards with very little risk.’

He added that there is a worry this could start ‘undermining capitalism itself’.

‘I urge boards and shareholders to rein in these huge pay packages, particularly at a time when many household finances are under severe pressure.’ 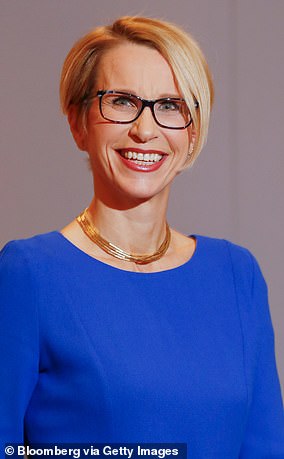 She makes £8.2million from her day job as the boss of GlaxoSmithKline and masterminded a £31billion deal that flopped – but that hasn’t stopped Dame Emma Walmsley taking on a lucrative ‘side hustle’.

Walmsley hauled in close to £300,000 from a part-time role on Microsoft’s board of directors last year. She is a member of the software giant’s pay and regulatory committees.

This means she was spending time on her job at Microsoft throughout the pandemic, even as GSK stumbled in its efforts to create a Covid vaccine.

She has been under attack from feared activist investor Elliott, which has repeatedly questioned whether she is the best person to lead GSK.

She masterminded the split earlier this year of GSK’s drugs arm from its consumer health business, now separately listed on the FTSE100 as Haleon. The spin-off has proved disappointing.

Walmsley turned down a £50billion offer for Haleon from Unilever last year. However, since being spun off, Haleon shares have fallen by a fifth and its market value is now under £25billion.

Other FTSE 100 bosses juggle their main jobs with second or even third roles. Peter Jackson, the boss of gambling titan Flutter, joined the board of Deliveroo in the spring.

The takeaway giant – which lists Jackson’s favourite Deliveroo dish as a Thai chicken curry – made a disastrous stock market debut in April 2021.

Jackson has taken the role despite netting £8.4million last year from Flutter, which owns the Paddy Power and Betfair brands.

RELX chief executive Erik Engstrom, who has made £100million over his time at the FTSE100 giant, also made an additional £69,500 from his role on the board of medical device maker Smith & Nephew.

He is also on the board of Stockholm-based media and publishing group Bonnier.

Experian chief executive Brian Cassin made £69,000 from his role on the Sainsbury’s board last year.

Shell head Ben van Beurden pocketed £160,000 from his role on the board of the luxury German car company Mercedes-Benz.

It would take an employee on a median average full-time salary of £31,285 almost 3,200 years to earn that sum. Engstrom, who has been at the helm since 2009, took home £9.6million in his latest pay packet.

Another £100million man is Rob Perrins, 57, the boss of upmarket housebuilder Berkeley Group, who has been chief executive since 2009.

The third to leap the £100million hurdle is AstraZeneca boss Pascal Soriot, who has been in charge of the drugs giant for a decade.

Soriot complained in 2018 that he was one of the ‘worst paid’ CEOs in the pharmaceutical industry after receiving £9.4million.

However, many will feel he deserves his money as his company collaborated with Oxford University on a coronavirus vaccine that has saved millions of lives worldwide.

The highest-paid FTSE100 boss in 2021 was Frenchman Sebastien de Montessus. 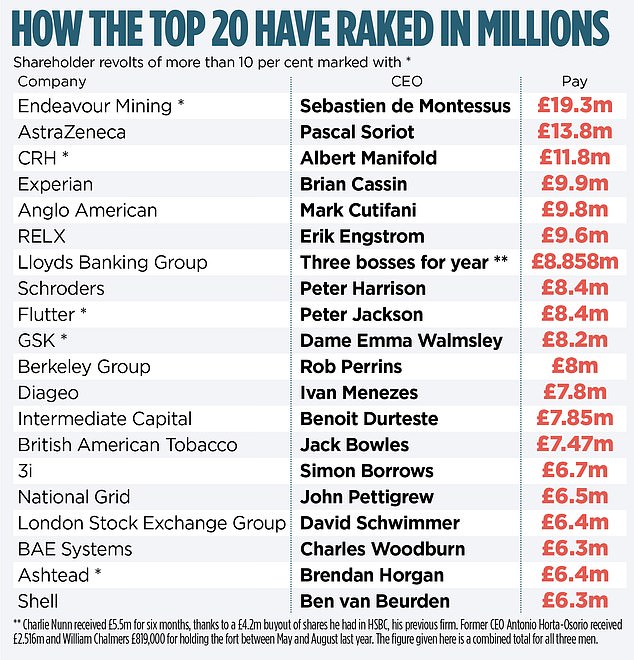 His package included £8million for relocating to London from Toronto so he would not be ‘financially disadvantaged’. Conservative MP Bob Blackman said: ‘These figures are neither fair or reasonable. Senior executives need to be setting a good example when it comes to showing pay restraint, especially when we’re seeing cost of living problems.

‘Directors have got to be thinking about whether they really need this level of income, and asking what it’s doing to their customers, their shareholders and the staff working for these companies. Of course, I have nothing against people who earn a huge amount as a result of taking risks with their own money and resources. But where they’re taking a risk with other people’s money, or they’re just employed to manage a company, then of course, it’s grossly unfair for them to be experiencing huge increases compared with their staff.’ 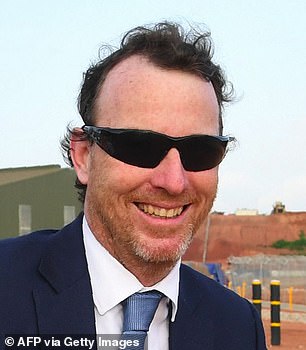 Raking it in: Sebastien de Montessus was paid £19million

Tesco boss Ken Murphy received £26,000 of benefits – more than most ordinary supermarket staff earn in a year – just to cover the cost of commuting from Ireland to the corporate headquarters in Welwyn Garden City as part of his £4.75million package.

Conservative MP Sir Geoffrey Clifton-Brown said: ‘We have a free market and people should be paid what they’re worth. If they’re producing the right results for their company, then they’re worth it.

‘Having said that, they do need to look at the image they’re creating for a whole system.

‘For example, claiming £26,000 to travel from one country to another does look quite discordant and you do have to question whether such excesses are reasonable.’

More than ten per cent of companies in the elite FTSE100 index suffered large votes against pay and were placed on the official list of shame.

Nearly 30 per cent of Ocado investors cast their vote against a bonus plan that could hand its chief executive Tim Steiner £100million over the next five years.

Around 50 companies on the FTSE250 index have faced similar revolts. Such protests, however, have no teeth and companies simply carry on paying immense sums with impunity.