Eco-warriors unveiled a banner reading ‘Honour Their Sacrifice, Climate Change Means War’ at the memorial on Whitehall, central London, at 8am. 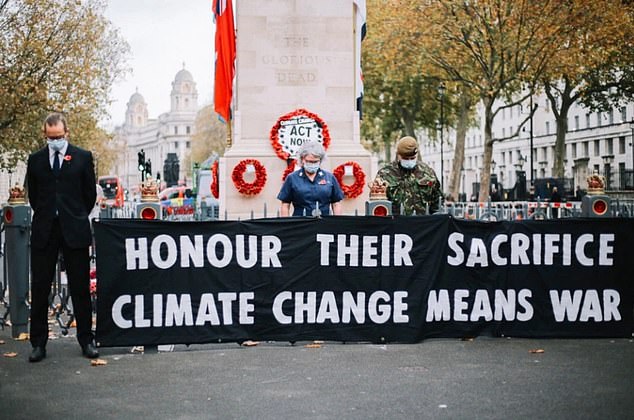 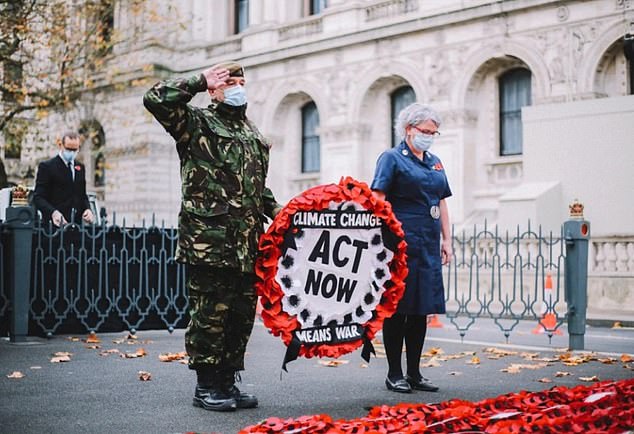 Veteran who survived IRA car bomb in 1974: The XR protestor behind controversial protest at the Cenotaph

As a young infantryman in the British Army, he was hit by shrapnel from an IRA car bomb that killed two other soldiers in Stewartstown in 1974.

These days, he is fighting climate change. 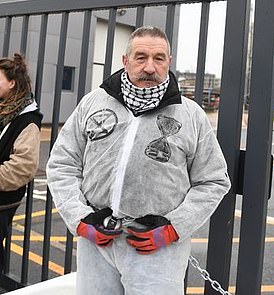 In February, he was seen digging up the lawn at Cambridge’s Trinity College and was later arrested after gluing himself to a police van, telling reporters he had been writing letters to the Government for nearly 50 years but was always ignored.

He said: ‘We had to be more disruptive. I just felt compelled to do something for my children and grandchildren.’

The 64-year-old said he wanted to highlight how climate change could cause more wars.

‘Remembrance Day is never an easy time for veterans and this was not an easy decision for me to make.

‘Unchecked climate change means a return to a world at war. I cannot stand by and let that happen. It is my duty to act.

‘This government’s own climate advisors, the committee on climate change, said last year that they have a ‘Dad’s Army’ approach to protecting British people from the impacts of climate change.

‘Their report in June this year showed that the government has failed to meet all but two of the 31 milestones it set itself for reducing emissions.

‘This government is criminally negligent and young people today will pay the price for their failure.

‘I did four tours in Northern Ireland. I have been in conflict. I saw good friends – my comrades, who I served with – die.

‘Many of the people who attend the Remembrance Day Service have never seen the horrors of war. I hope they never have to.

‘However you feel about the action today, I want people to take this message – if we don’t deal with this climate emergency, now, it will lead to war.’

XR said in a post on its website: The action aims to highlight the connection between rising global temperatures and an increase in the incidence of conflict and war.

‘Research commissioned by the Ministry of Defence published in June this year points to a ”growing recognition that climate change may aggravate existing threats to international peace and security”.’ 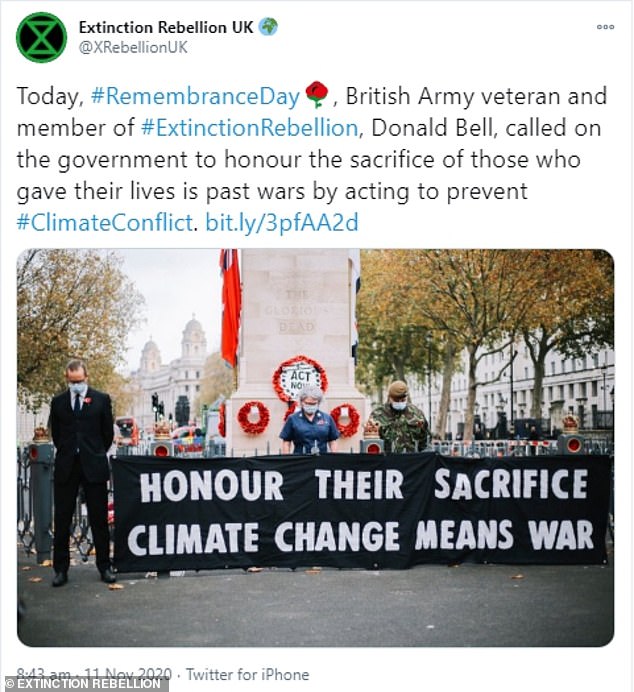 How DID climate anarchists cost the taxpayer £15 million in a year?

Around 12 protesters were arrested after undressing and gluing themselves to the glass in the House of Commons viewing gallery during a debate on Brexit.

Five activists, including XR co-founder Simon Bramwell, were arrested for criminal damage when they targeted Shell’s headquarters, near Waterloo.

On the second day of actions on Waterloo Bridge police started arresting people at 12.40 pm, but stopped a few hours later when the force ran out of holding cells.

By the end of the day an estimated 500,000 people had been affected by the disruptions and 290 activists had been arrested in London.

Two activists climbed onto the roof of a Docklands Light Railway train at Canary Wharf station whilst another glued himself to the side, spreading disruption to railway services.

A large force of police marched on the camp at Parliament Square, arresting people and partially removing roadblocks before it was retaken later the same night by protesters.

Some 428 people had been arrested at this point.

A dozen teenagers, some aged 13 and 14, walked to the Healthrow access road holding a banner which read ‘Are we the last generation?’ They were surrounded by police.

By late that evening 682 people had so far been arrested in London during the course of the demonstrations.

London Stock Exchange is blockaded by protestors who glued themselved to the entrance while wearing LED signs.

Four protesters climbed on to a Docklands Light Railway train at Canary Wharf.

Activists gathered at Hyde Park to mark an end to the 11-day protest.

A weekend of protest in east London included a mass bike ride, traffic blockades and talks at London Fields.

London Fashion Week was targetted with Victoria Beckham’s show interupted by a swarm of demonstrators.

200 people gathered for a ‘funeral march’ from a H&M in Trafalgar Square to a fashion week venue in The Strand.

Tried to blockade the Port of Dover by marching on the A20.

Opening ceremony held at Marble Arch was attended by a thousand protesters.

Half a dozen activists dressed in yellow-and-black bee outfits held an action during the Liberal Democrats election campaign in Streatham, south London.

Activists blockaded a central London road to demand the next government tackles air pollution in London.

Extinction Rebellion members of the University of Cambridge assembled to dig up a patch of lawn outside of Trinity College.

It added: ‘The action today calls on the government to act to avert the increase in unrest, conflict and war anticipated by the Ministry of Defence report.

‘The Committee on Climate Change – which advises the government on emissions reduction and reports on their progress – revealed in June this year that the government had reached only two of it’s 31 milestones and was on track with only four of the 21 indicators identified on the path to zero emissions.

‘The action makes the point that, in this context, speaking up about consequences of unchecked warning is an act of remembrance.’

But the stunt was met with fury among veterans and online as social media users branded the group ‘truly shameful’.

‘These privileged prats seem to be doing all they can to turn public opinion against them.’

Another person added: ‘There is a place and a time….and THIS ISN’T IT.

‘Were it not for those who fought & died….these self righteous ‘woke’ extinction rebellion lot wouldn’t even see light or day!

Another person wrote: ‘Extinction Rebellion really know how to lose support for their cause.

‘Their members are now designated to the rank of scum. They need a new PR representative.’

Last month XR were blasted for going to Sir David Attenborough’s home before being turned away by his daughter who said they were shielding from Covid-19.

They delivered a ‘starter pack on how to engage in civil disobedience’ to his house in Richmond, west London, after he warned them not to break the law.

They said the 94-year-old’s influence and comments ‘are contributing to the erasure of the voices and sacrifices of front-line earth protectors around the world’.

The four women and two men said they hoped to drop off the delivery in person so it came across ‘like a friend to a friend wanting to reach him where he lives’.

But they were told by Sir David’s daughter Susan he would not open the door amid the coronavirus pandemic.

In September protesters blockaded printworks for national newspapers, with one of the demonstrators claiming the British media was worse than the Nazis.

Donnachadh McCarthy, 61, emerged as one of the leading figures in the group, and justified the attack by saying: ‘This is like World War Two and you guys [the newspapers] are on the other side. That is how we see it.

What is Extinction Rebellion and what do they want?

‘Extinction Rebellion is an international movement that uses non-violent civil disobedience in an attempt to halt mass extinction and the risk of social collapse,’ according to its website’s ‘about’ page.

The environmentalist protest group held its first demonstration in Parliament Square on October 31, 2018.

The worldwide group want to change the structure of power to take authority away from central governments.

Its website reads: ‘We understand that we must self-organise to meet our own needs, which in the context of Extinction Rebellion means that we are working to equalise power by disrupting the usual pillars of power that govern our lives.’

The environmentalist protest group held its first demonstration in Parliament Square on October 31, 2018

Since 2018 members of the group have gathered at London Fashion Week, the House of Commons and various other locations around central London.

On the morning of Wednesday, April 17, 2019, two activists climbed onto the roof of a Docklands Light Railway train at Canary Wharf station whilst another glued himself to the side, spreading disruption to railway services.

The following day the three activists were charged with obstructing trains. After pleading not guilty they were sent to jail for four weeks, with no bail, whilst awaiting their next hearing.

On February 17 2020, Extinction Rebellion members of the University of Cambridge dug up a patch of lawn outside Trinity College, as a protest against its investment in oil and gas companies. The mud dug up was later taken to a local branch of Halifax.