Extinction Rebellion protesters have doused the steps at Trafalgar Square in fake blood to stand in solidarity with indigenous people dying of Covid-19 in Brazil.

Protesters lay on the drenched steps pretending to be dead while a banner reading ‘indigenous emergency’ was held in the background.

Some held signs reading ‘genocide = ecocide’ and ‘indigenous emergency’ during the protest – which also featured demonstrators from the Articulation of Indigenous Peoples of Brazil (APIB), HS2 Rebellion and the Internationalist Solidarity Network, Metro reports.

They aimed to raise awareness of the number of indigenous people in Brazil – the second worst-hit country in the world – dying from Covid-19. 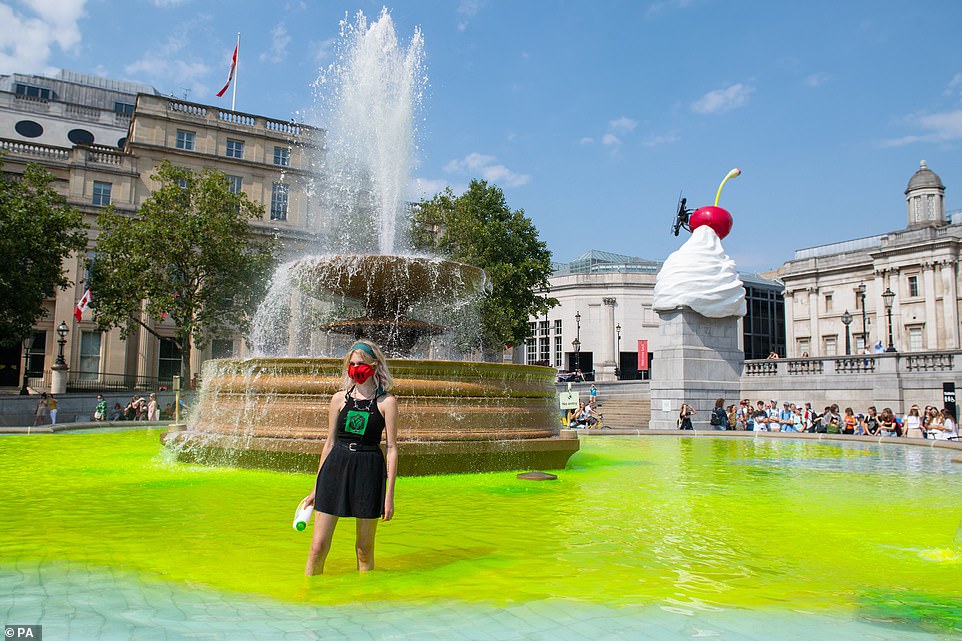 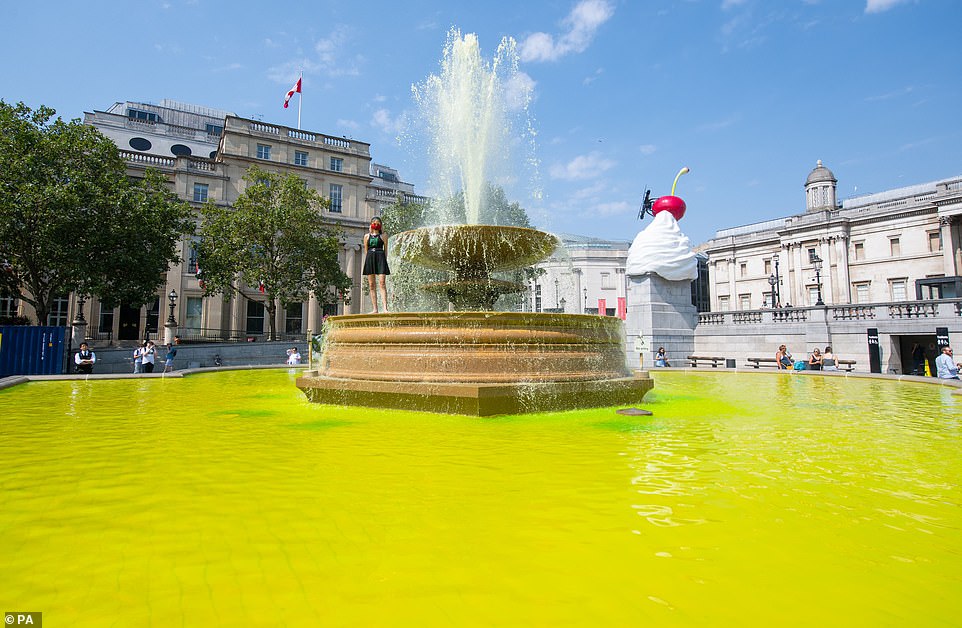 The group used food dye to dye the fountain fluorescent yellow during their protest in Trafalgar Square, London, today 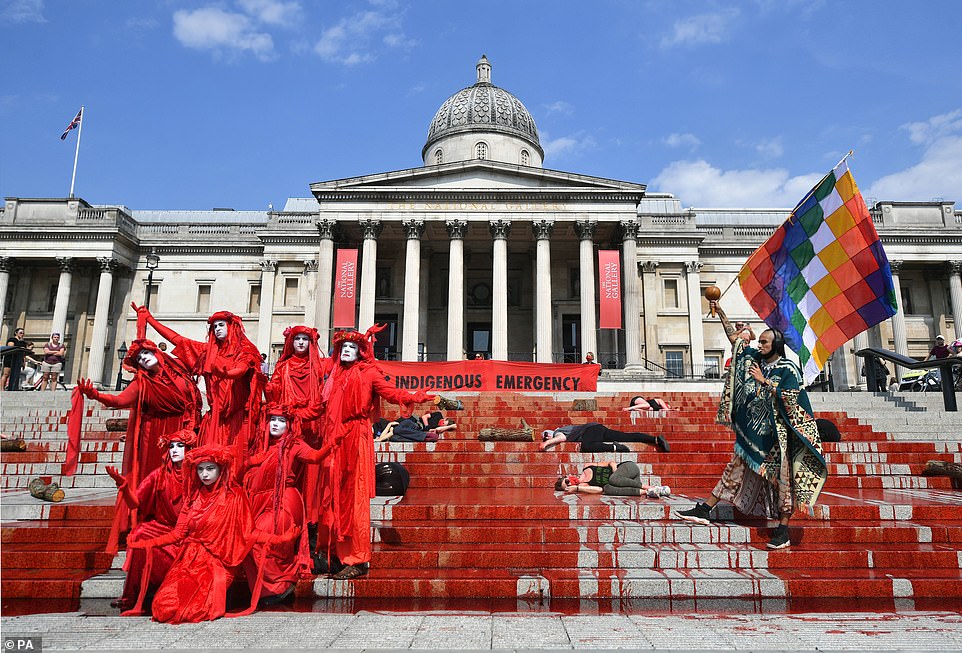 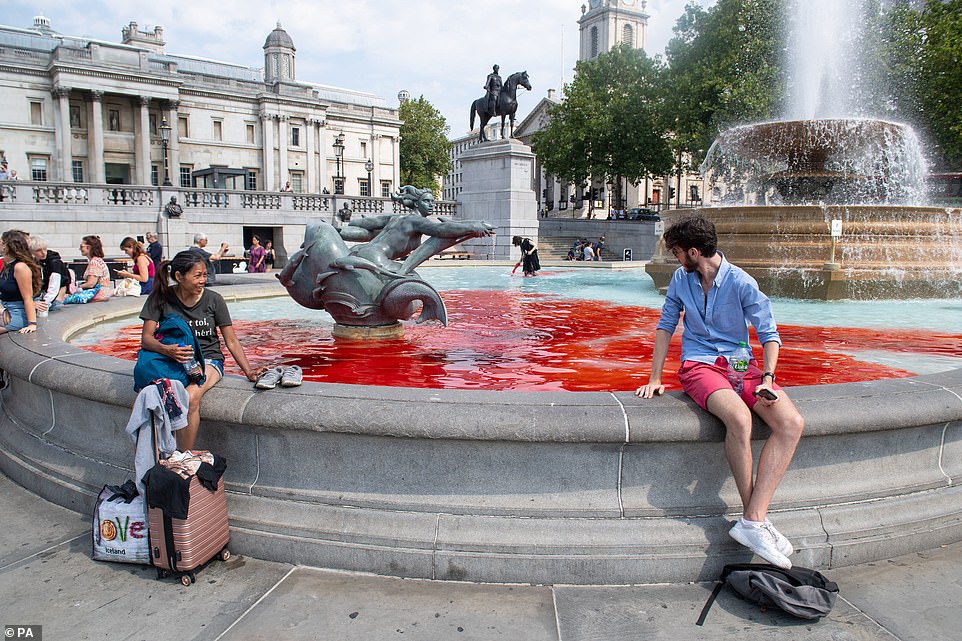 The fountain was also dyed red using food dye. Amazed onlookers watched as the water changed colour around them 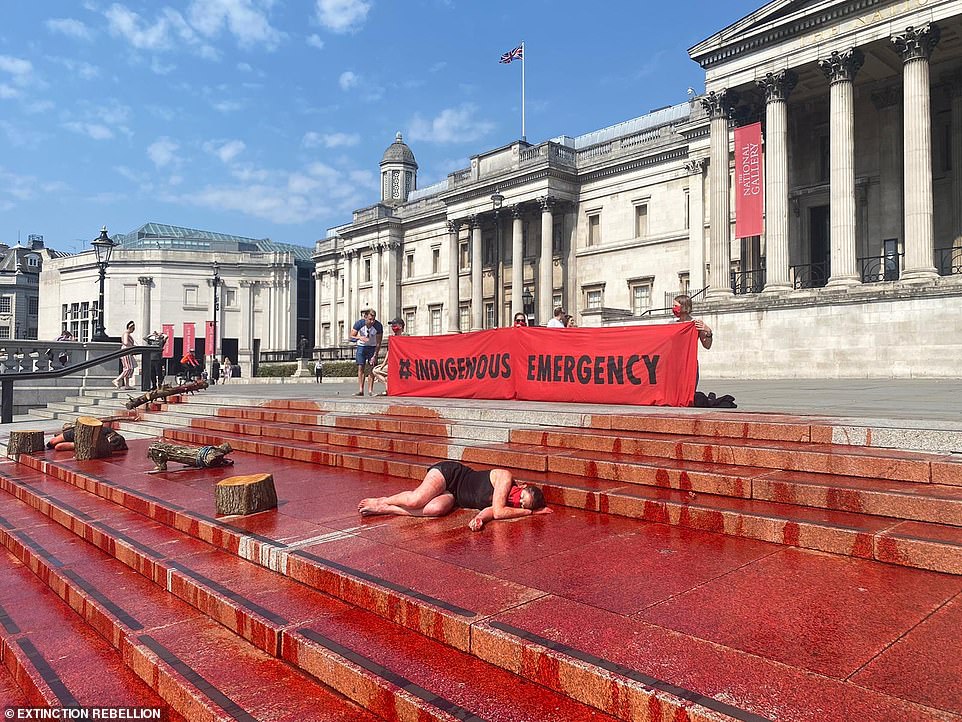 Protesters pretended to be dead as they lay on the steps at Trafalgar Square. The protest marked International Day of the World’s Indigenous Peoples 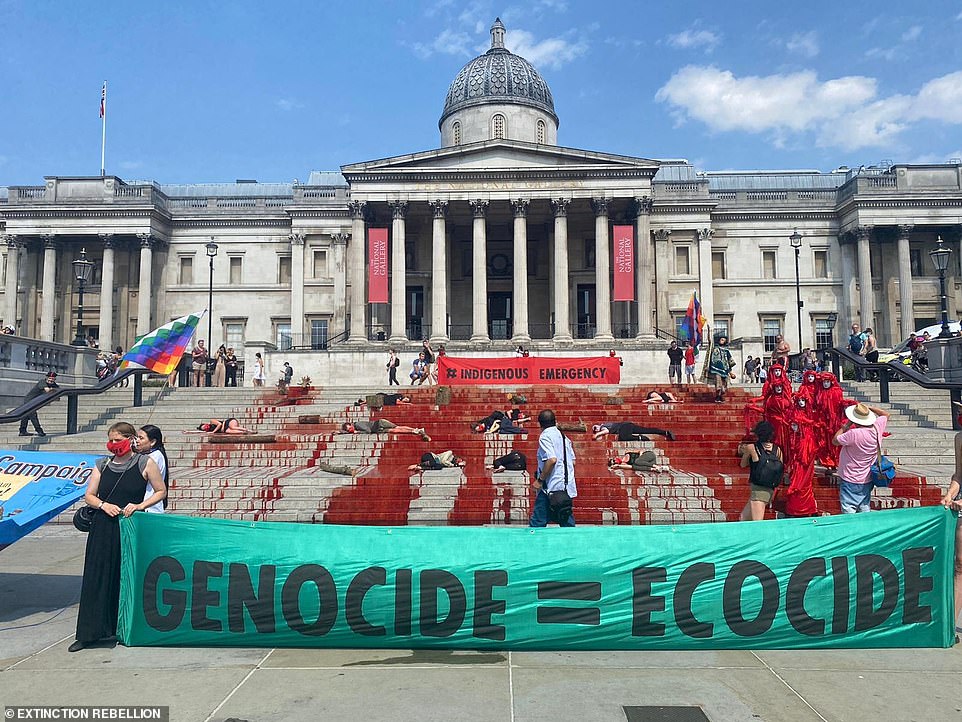 Brazil has upwards of three million coronavirus cases and more than 100,000 deaths – with fears that deprived areas, such as indigenous communities, could see a quicker spread.

Health experts are concerned that coronavirus could wipe out indigenous communities in Brazil all together.

The community’s elders are most at risk of dying from the virus, which experts say would cause ‘chaos’ because elders provide wisdom and social organisation.

To tackle the outbreak, members of some communities are breaking off into smaller groups equipped with hunting supplies to wait out the outbreak in isolation. 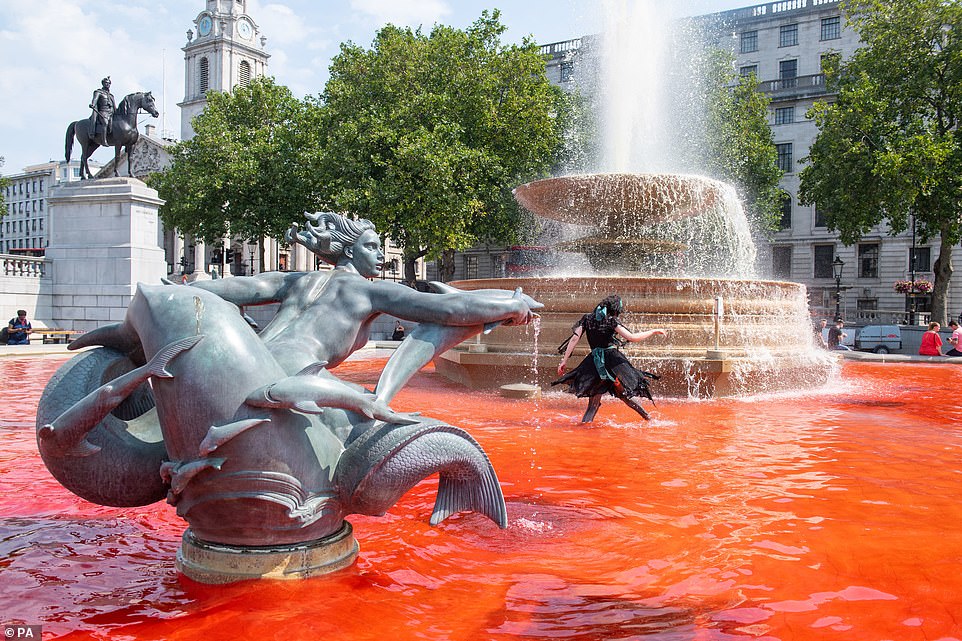 The fountains were also dyed red by protesters today. One woman can be seen splashing in the water during the protest 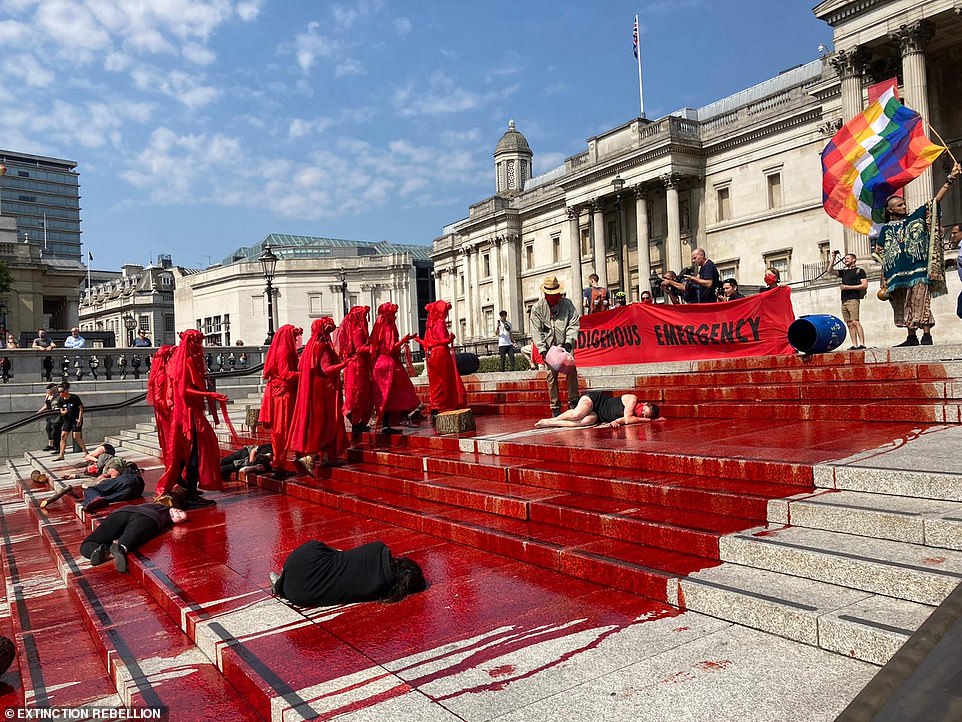 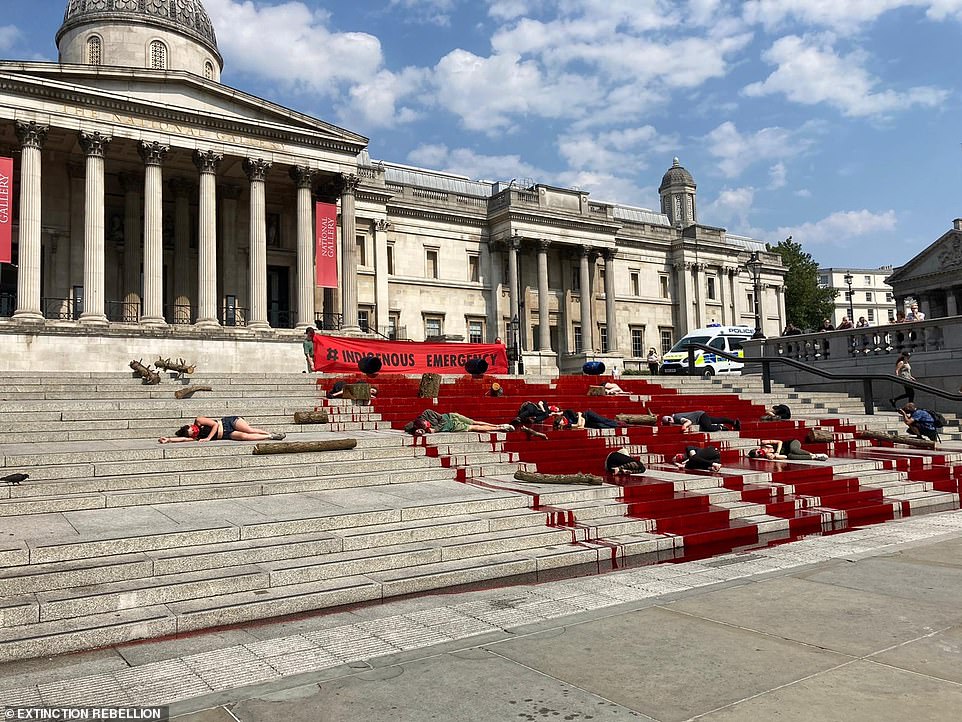 Federal University of São Paulo researcher Dr Sofia Mendonça told BBC News: ‘There is an incredible risk of the virus spreading across the native communities and wiping them out.

‘Everyone gets sick, and you lose all the old people, their wisdom and social organization. It’s chaos.’

Extinction Rebellion have caused chaos across the capital in various protests across the last two years.

The research shows the Extinction Rebellion (XR) activists who brought London to a standstill last year had a much broader and more diverse age profile than previous environmental direct action protests. 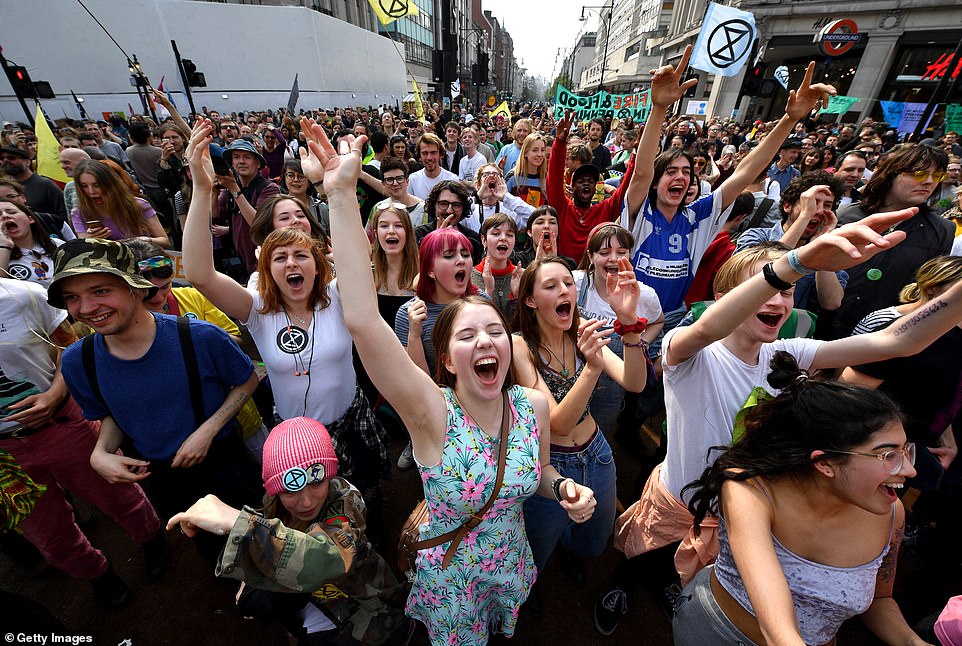 A new study has found that Extinction Rebellion supporters are most likely to be middle-class, highly educated women from the south. The study looked at the demos in London last year 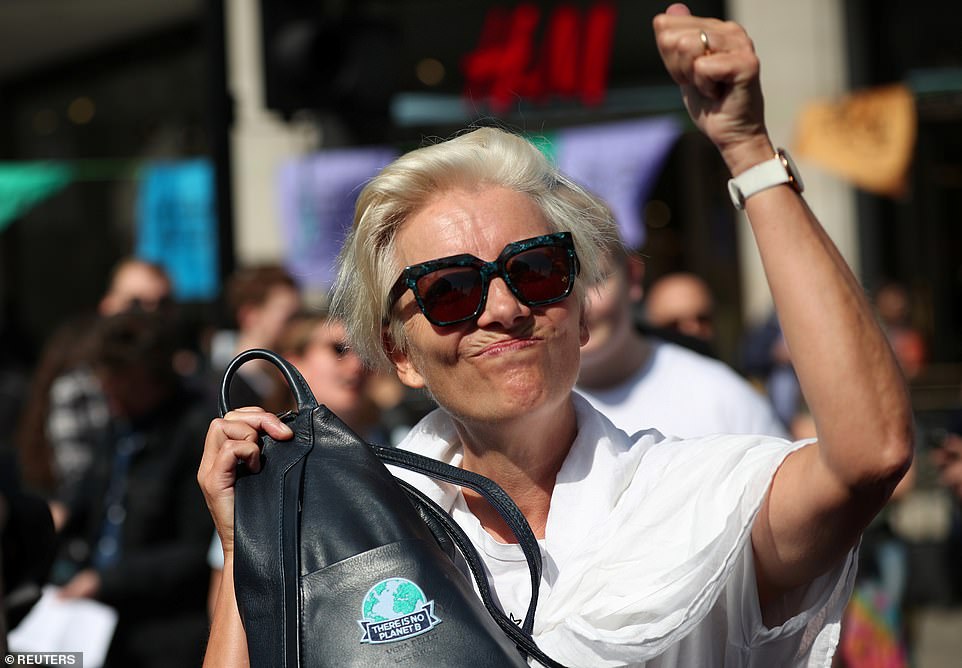 The study revealed around 85 per cent of those who took part in the action in London last year had a degree, and a third had a postgraduate qualification.

Two thirds identified themselves as middle-class while a high proportion were self-employed, part-time workers or students.

Three-quarters of those who were charged with offences lived below the Severn-Wash line, traditionally separating the north and south of England.

The research also found that XR activists were mostly non-metropolitan. A third of those who appeared in court were from the West Country with hotspots in Stroud, Totnes and Frome.

This contrasted the six per cent who appeared in court and were from Birmingham, Greater Manchester, Liverpool, Leeds, Newcastle, Edinburgh, Bradford, Sheffield, Glasgow, Swansea and Cardiff combined.

Professor Clare Saunders, from the University of Exeter, said: ‘Our analysis shows one strength of Extinction Rebellion has been to involve people who are not natural protesters, and perhaps even less so natural law-breakers, but who were already persuaded of the rightness of the climate cause, and frustrated with the inability of both politicians and lifestyle environmentalism to bring about change.

‘Mobilising this group enabled Extinction Rebellion to significantly expand the numbers of people willing to engage in environmental direct action, broadening its age profile, and bringing non-violent direct action on climate change into the centre of political life in the UK.’

Extinction Rebellion is a global environmental movement who aim to use non-violent civil disobedience to try and compel government action to tackle climate change.

In April last year, more than 1,000 activists were arrested after protesters occupied four sites across London as well as blocking roads, disrupting a railway line and conducting a protest at Heathrow. 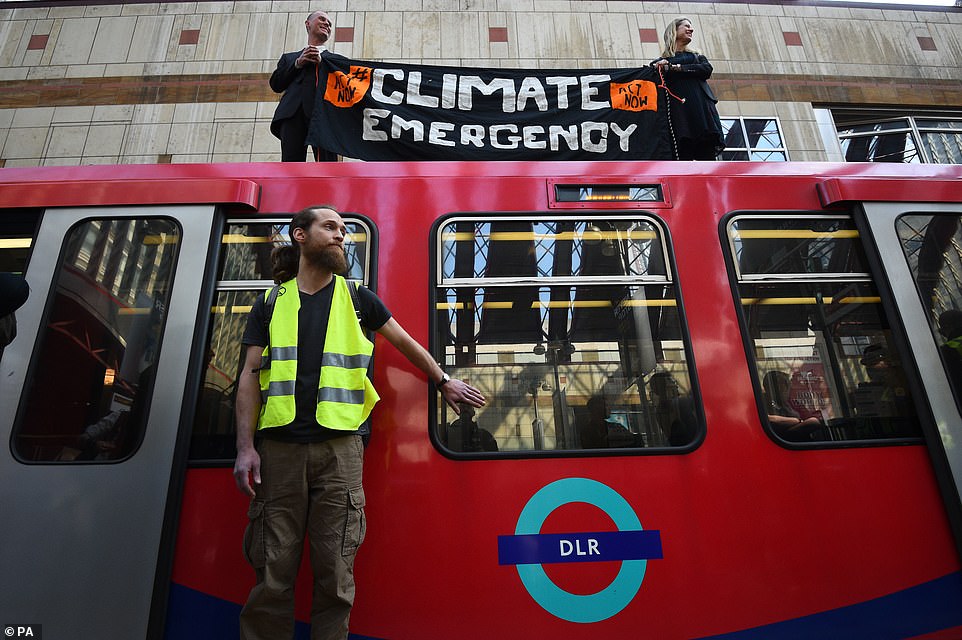 In October, protesters used a decommissioned fire engine to spray the front of the treasury in London with 1,800 litres of fake blood, holding banners which read ‘STOP FUNDING CLIMATE DEATH’.

The group has received celebrity backing since their profile has grown including the likes of actress Emma Thompson and British models Lily Cole and Daisy Lowe.

The study, which was published yesterday and funded by the Centre for the Understanding of Sustainable Prosperity, revealed that XR supporters are also more likely to be new to protesting than other environmental activists, with 10 per cent of those who took part in the April 2019 protest being first-time demonstrators.

The majority of protesters surveyed said they most closely identified with the Green Party at 59.1 per cent while 15.5 per cent said they backed the Labour party.

Researchers say there was almost no support among Extinction Rebellion activists for the Conservative party and very little for the Liberal Democrats.

Professor Brian Doherty, from Keele University, said: ‘We found Extinction Rebellion activists are much more likely to vote and be members of political parties than the general population.

‘But they are also sceptical about the ability of political parties and government to deliver effective solutions to environmental problems.’

Dr Graeme Hayes, from Aston University, said: ‘Protestors said they did not believe in reliance on companies and the market, governments, or lifestyle changes by individuals to solve the climate crisis.

‘Almost all said they were protesting to raise awareness of the climate emergency, and to pressure politicians to act.

‘This is a potential point of contention for Extinction Rebellion. Its strategy emphasises lobbying the government for action, but its activists do not think the government can deliver.’