By Martin Beckford For Mail On Sunday

Extra police patrols are being deployed to prevent fatalities on a ‘smart motorway’ stretch of the M1 where the controversial scheme has been blamed for four deaths.

More than 400 miles of seven motorways have already been converted to smart motorways, where the hard shoulder is removed to create an extra lane of traffic and the speed limit can be lowered depending on conditions.

Campaigners and politicians have called for a planned doubling of the scheme to be halted until safety improvements are made.

Now South Yorkshire Police has revealed it is having to put more traffic officers on duty along stretches of the M1 where the hard shoulder has been removed by Highways England.

Campaigners and politicians have called for a planned doubling of the scheme to be halted until safety improvements are made. Pictured: A section of the M1 four-lane smart motorway in West Yorkshire

An official report says the extra patrols are needed to look out for motorists whose vehicles have broken down and are stranded in speeding traffic without a safe refuge.

This is the first time a major police force has raised fears over the safety of the scheme. Four people were killed in less than a year on a smart motorway section of the M1 in South Yorkshire.

Police have previously only expressed concern that the lack of hard shoulder on the new roads makes it more difficult to chase and catch suspects.

But South Yorkshire Police go far further in a new annual report, stating: ‘Roads policing resources attend incidents on the motorway network including where vehicles have broken down in live lanes, where they are often the closest resource to ensure the safety of the public.

‘The introduction of the new smart motorway system often sees vehicles stranded in live lanes because there is no hard shoulder. 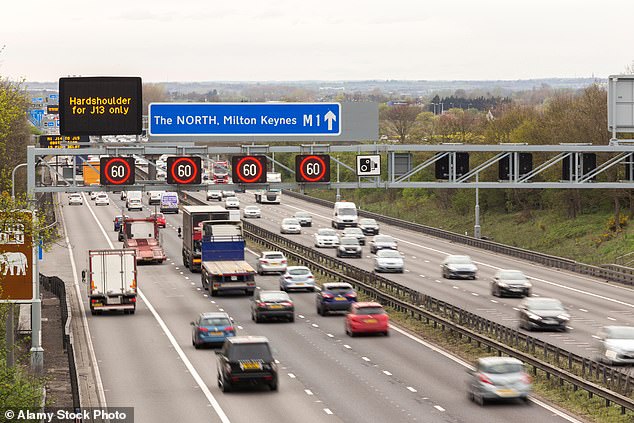 More than 400 miles of seven motorways have already been converted to smart motorways, where the hard shoulder is removed to create an extra lane of traffic and the speed limit can be lowered depending on conditions

‘This creates additional demand and South Yorkshire Police works with Highways England playing a vital role in ensuring that the public are kept safe when cars are stranded and there is a risk of a serious collision occurring.’

A year ago, a 62-year-old woman was killed on the smart motorway section of the M1 close to Woodall services, Sheffield, after the car she was a passenger in broke down and was struck by a passing Mercedes.

Then 83-year-old Derek Crafter died after his VW van got a puncture on a nearby section of the motorway in March and was hit by a passing car and a coach.

And in June, Jason Mercer, 44, and Alexandru Murgeanu, 22, were both killed by oncoming traffic near the Meadowhall junction of the M1.

They had pulled over to exchange details after a minor collision when they were struck by a lorry. Mr Mercer’s widow Claire is now suing Highways England for corporate manslaughter.

As this newspaper revealed last week, enforcement of speed and traffic offences on smart motorways is also increasing police work.

Thames Valley Police plans to recruit 15 extra staff, with money from Highways England, to process all the fines expected when sections of the M4 and M40 become ‘smart’.

The force estimated that each camera on the roads, which can pick up drivers straying into lanes shut with a red ‘X’ as well as speeders, will capture 500 infringements a month – generating £600,000 a year in fines.

Last night, Edmund King, president of the AA, said of the situation in South Yorkshire: ‘This police report puts the potential horror of smart motorways in black and white.

‘It means the police know the Highways England scheme is dangerous but have to increase resources to pick up the pieces.

‘Highways England should fix the smart motorways by doubling the number of lay-bys rather than expecting police to rescue stranded drivers in potentially deadly situations.

‘It seems criminal to carry on with these schemes when we know they can put lives at risk.’