The French president blasted his counterpart over suggestions he should negotiate with pro-Russian separatists, exclaiming at one point: ‘I don’t know where your lawyers learned the law!’

The tense exchange ended with Putin declaring he is in the gym about to play ice hockey after brushing off requests to hold a meeting with Joe Biden.

The details of the confidential February 20 call were revealed by the broadcaster France 2 in a documentary on the French president’s handling of the conflict that will air on Thursday.

In the exchange, which finds Putin limbering up in a gymnasium, Putin describes the 2014 revolution that brought pro-Western leaders to power in Ukraine as a coup and accuses Volodymyr Zelensky of refusing to engage in dialogue with pro-Russian separatists.

The conversation starts with Macron seeking clarity on Putin’s ‘intentions’ and asking what ‘useful actions’ could prevent an all-out war.

The Russian strongman then takes a swipe at Zelensky who he accuses of ‘lying’ about the Minsk agreements, an accord signed in 2014 that aimed and failed to end the war in the Donbas.

Putin claims the separatists in the region have been trying to negotiate diplomatically with Ukraine and tried to ‘open a constructive dialogue’ with Zelensky who refused to talk to them.

Putin also encourages Macron to negotiate with the separatists, but he angrily replieds: ‘It is not separatists who are going to make proposals on Ukrainian laws!’

Putin counters: ‘Of course, we have a completely different reading of the situation.’ 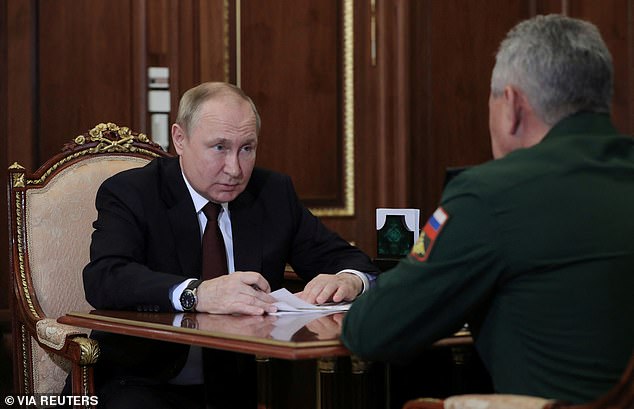 The French president launches back: ‘I don’t know where your lawyer learned the law! Me, I just look at the texts and I try to apply them!

‘I don’t know what jurist will be able to tell you that in a sovereign country, the texts of laws are proposed by separatist groups and not by the democratically elected authorities.’

A raging Putin then replies: ‘This is not a democratically elected government. They came to power in a coup, there were people burned alive, it was a bloodbath and Zelensky is one of those responsible.’

When the Kremlin leader again suggested Macron negotiate with the separatists, the Frenchman exclaims: ‘We don’t give a damn about the separatists’ proposals.’

In a bid to calm down the fiery exchange, Macron proposes a meeting with Biden, which Putin appears to dismiss without a firm date and agreement. 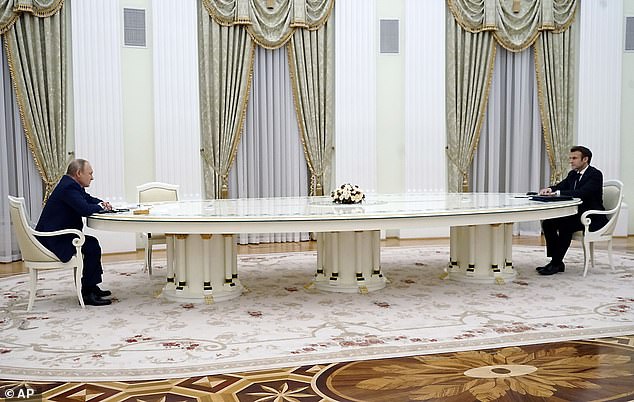 Putin and Macron are seated far apart in the Kremlin on February 7, 13 days before their fiery phone call

The Western leader also pleads for everyone to ‘calm down’ and says he will ask the same of Zelensky and Ukrainian forces.

Macron asked Putin to end the military exercises which had seen tens of thousands of Russian troops piling up on the border and carrying out war games in Belarus.

At the end of the call, Macron suggests issuing a press release that Putin and Biden would meet ‘in principle’.

But Putin breezily answers: ‘To be honest with you, I wanted to go play ice hockey because here I’m talking to you from the gym before starting physical exercises. I’ll call my advisors first.’

Putin’s lapdog, foreign minister Sergei Lavrov said Russia had nothing to be ashamed of from the content of the conversation but called the publication a breach of ‘diplomatic etiquette’.

He said: ‘We in principle lead negotiations in such a way that we never have anything to be ashamed of. We always say what we think and are ready to answer for these words and explain our position.’

Since the outbreak of war, Macron has continued to position himself as the peacemaker of Europe, holding talks with Putin while most other Western leaders shunned him.

But his attempts at brokering a ceasefire have so far failed, and he has taken heat for trying to negotiate with a warmongerer.