A seagull had a narrow escape from certain death after being ambushed by an octopus.

The bird was flying over a beach on Rottnest Island, in Western Australia, when the octopus wrapped its tentacles around it as it sat on the surface of the water.

Stuart Love watched in awe as the bird fought for his life, before a man clutching a bottle of beer waded in and saved the animal.

The man strides in and plucks the octopus out of the water with one had, not dropping his beer (file picture)

Mr Love told PerthNow the octopus’s behavior shocked everyone on the beach.

‘I’ve never seen anything like that before,’ he said.

The video begins with the bird helplessly flaying its wings as the tentacles wrap squeeze tighter around its body.

‘Get the occy, get the occy!’ someone off camera tells the man stepping in to save the bird.

The man smoothly lifts the octopus out of the water, freeing the bird which flies away.

‘Everyone lived to fight another day,’ Mr Love said. 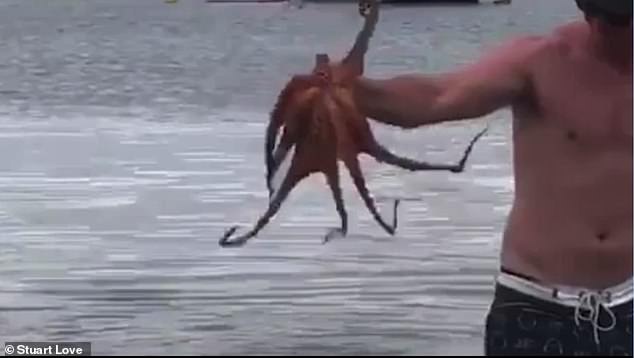 Holding the octopus away at arms length, the man’s friends laugh at the situation (file picture)