A young woman who paid $2000 to get her ears pointed by body modifier Brendan Russell has revealed how disappointed she is with the end result.

Holly, 22, from Melbourne, told Daily Mail Australia she has been left with ‘uneven ear points’ after going to Russell during one of his tours through Victoria last year.

‘One side is pointed exactly how I wanted, like an elf’s ear, but the other one is round with a tiny point up the top – not at all what I envisioned.

Holly, 22, from Melbourne, told Daily Mail Australia she has been left with ‘uneven ear points’ after going to Russell during one of his tours through Victoria last year 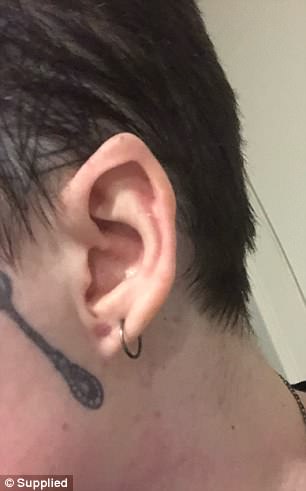 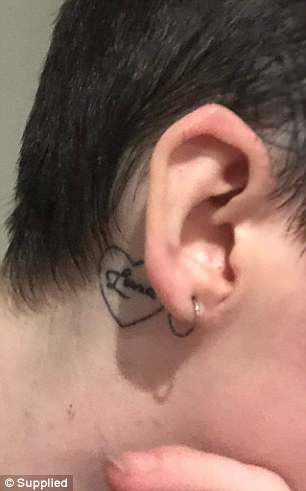 The young woman decided to come forward about her uneven ears after seeing Russell was charged with prohibition of genital mutilation.

It is alleged he used a branding iron to ‘burn off part of’ a woman’s genitals, after she approached him for a modification at a tattoo studio in Newcastle in 2016.

Holly, who went to Russell after hearing good reviews wishes more people had ‘complained about him’ sooner.

‘I had a friend who had his head scarred by Brendan, and I read a lot of reviews, no one said they weren’t happy with the work.

‘I wish the people who weren’t happy with his service had spoken up sooner – I wouldn’t have gone to him if I had seen negative feedback.’

She had to ‘sleep on an airplane pillow for months’ following the surgery to allow her ears to heal.

‘I want to get them fixed, but it is expensive and the healing is a lot of hassle,’ she said. 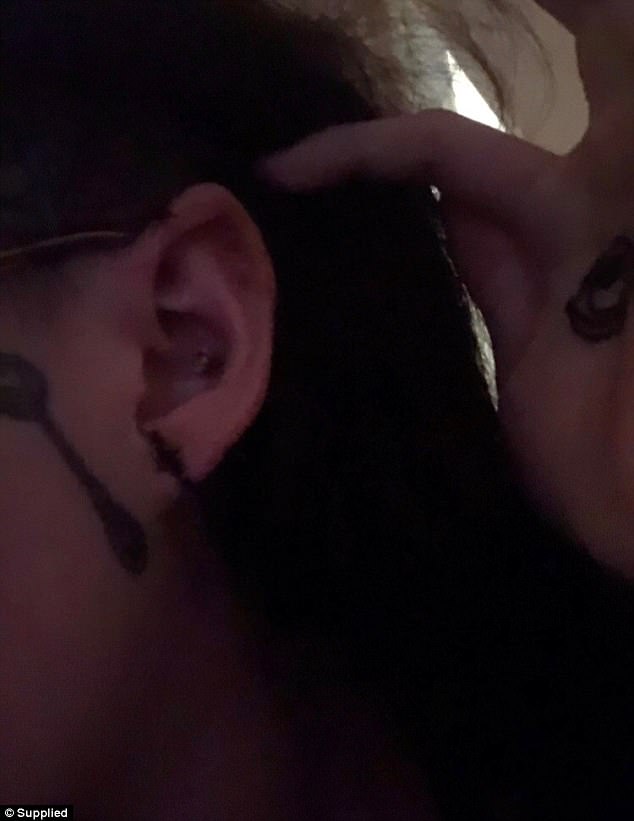 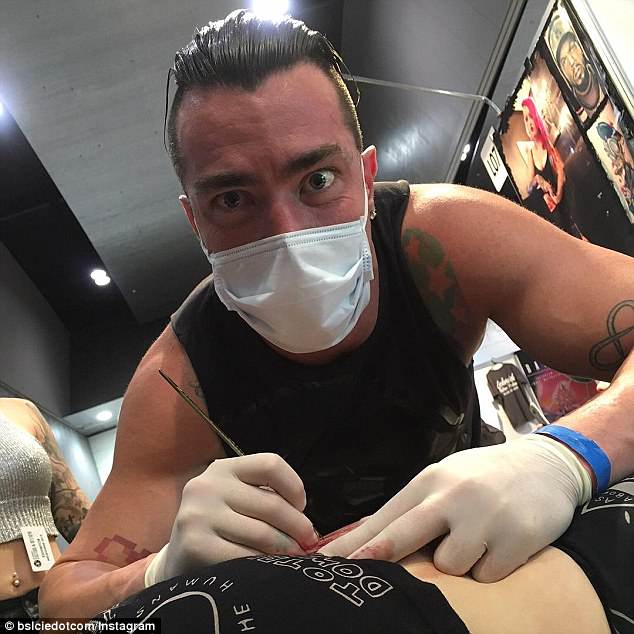 Russell, 37, pictured, was recently charged with prohibition of genital mutilation after he allegedly used a branding iron to burn off part of a woman’s genitals

‘It is annoying because I had wanted to get them done since I was like 14 – and now I have been left with something I am not happy with.’

The young woman is a body piercer, and researched body modification and artists in the scene before she had her work done.

Holly said Russell was gruff when they met for the first time – which is when she had her ears pointed and her stretched lobes sewn shut.

‘I almost didn’t go through with it because I didn’t like his personality but I had travelled two hours to see him and then waited for two hours so I just did it.’

‘He used a needle to numb my ears first, then he cut them, put the silicon in and sewed them shut,’ she said.

But, according to the young body piercer, the silicon didn’t take to one of the ears as well.

‘It is basically held on there by my skin – it pops out of position all the time,’ she said.

‘But I never complained to him, because when it was healing my ears went a greeny-yellow colour so I freaked out and called him and he made me feel silly, and said there was nothing wrong and it was all normal,’ she said. 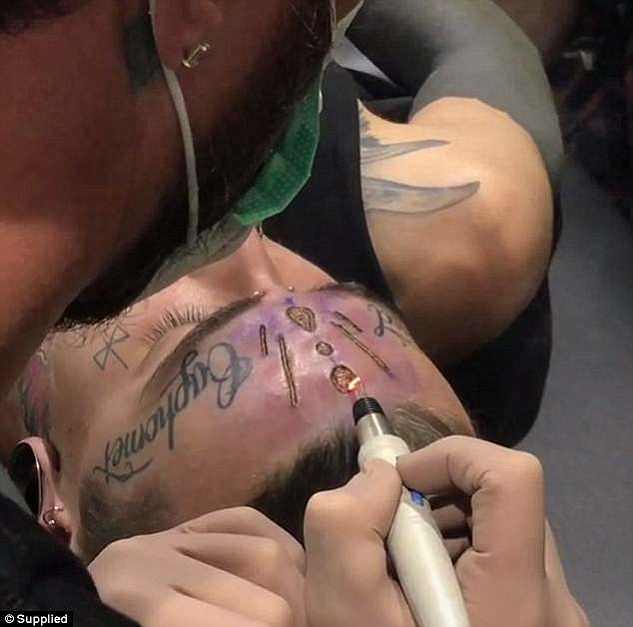 He used a needle to numb my ears first, then he cut them, put the silicon in and sewed them shut,’ she said – Russell is pictured doing a scarification piece on a client

The ears healed fine – but the shape was not what she thought.

‘His attitude made me uncomfortable. So when I do get my ears fixed I will go to someone else.

‘And when he kept bragging about being a professional boxer and being able to fight I really felt like I couldn’t say anything to him.’ 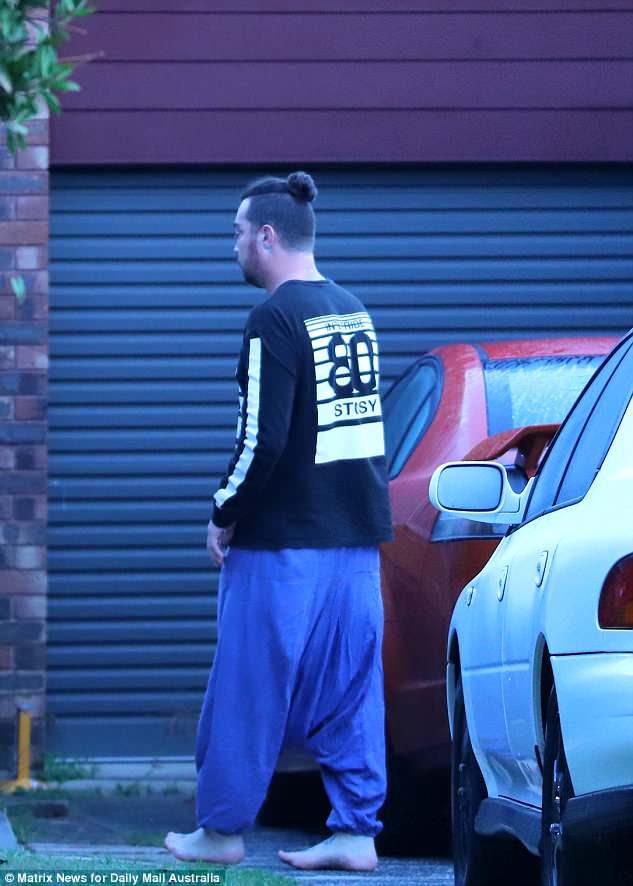 Holly was also concerned with the modification artist’s hygíene practices.

‘When I said something about it he started changing his gloves right in front of my face as if to say ”look I am changing them”, but he also cut the silicon without gloves on – which concerned me.’

Russell has only been charged with the one offence, he will appear before Gosford Local Court on July 20.