Forget the mask, bring the bubble: The bizarre and VERY extreme lengths a Victorian man has gone to as he protects himself against COVID-19

A Victorian shopper has gone to great lengths to protect himself against COVID-19 by travelling in a large plastic bubble.

The man, from Belgrave, 47km east of Melbourne, was filmed walking down the high street wearing no shoes or a mask but the plastic covering.

He’s heard shouting ‘I’m the man in the bubble’ as bystanders watch on in amusement on Friday.

The hilarious outfit comes as Victoria recorded a record of 532 new cases of coronavirus as Premier Daniel Andrews threatened to shut down entire industries in the next stage of restrictions.

Six more Victorians have died overnight, including five residents in aged care and a man in his 50s. A total of 245 people are in hospital with 44 in intensive care.

A Victorian man from Belgrave, east of Melbourne, was filmed walking up and down the main street of town inside a large plastic bubble (pictured)

The video was posted to Facebook by another local who thanked the man for ‘making everyone smile’.

Others were quick to comment on the footage with one saying: ‘I’m actually laughing so hard.’

‘How Victorians are reacting to the lockdown,’ another replied.

‘I think he was just trying to brighten up our lives a bit. Luckily, it was early morning and it wasn’t busy,’ a third added.

While residents in metropolitan Melbourne and the Mitchell Shire are under strict lockdown restrictions those in the regions have slightly more freedom.

Victorians outside Melbourne are being urged to use common sense when it comes to visiting friends and family, especially those who are more vulnerable.

‘You should wear a face covering when you leave home if it is difficult to keep 1.5 metres apart from others,’ a statement read.

‘Outside of metropolitan Melbourne and Mitchell Shire there will be no enforcement on the use of face coverings.

‘You will not be fined if you don’t wear one.’ 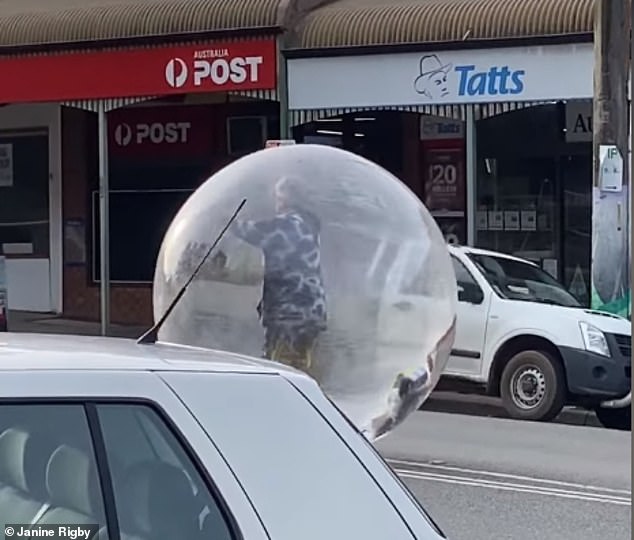