I am standing in a car park, just outside Aylesbury, beside what looks like a large shipping container. The tin-roofed building wouldn’t look out of place at a festival, but there it would be a bar or the first aid centre. It’s surrounded by scaffolding and sits in front of a derelict building site.

You’d have no idea from the outside, but this is the beating heart of the Government’s latest plan to revolutionise the NHS. This building – and more than 100 similar sites – hosts a service specialising in a specific type of surgery, such as hip replacements or hysterectomies.

According to NHS chief executive Amanda Pritchard, so-called surgical hubs like this are the solution to tackling the health service’s huge waiting lists.

Inside is a conveyor belt of patients undergoing a vital procedure to save their eyesight – 30 minutes at a time, one in, one out. The patients are having a procedure to fix cataracts – where the lens in the eye becomes cloudy – which is one of the most in-demand surgeries.

According to figures published last week, innovations such as this might be working.

An artist’s impression of the NHS hubs that will spring up in high streets. Each site will host a service specialising in a specific type of surgery, such as hip replacements or hysterectomies

On Monday, Health Secretary Sajid Javid announced that the number of people waiting more than two years for operations such as hip replacements, eye operations and heart surgery had halved in just four months.

And figures revealed to The Mail on Sunday last night showed the figure has fallen a further 15 per cent in a week, to just over 8,000 patients.

Over the past few weeks I’ve travelled the country uncovering the astounding efforts hospitals are making to clear the backlog. From breast screening in shopping centres to clinics dedicated to fixing aching joints, cutting-edge innovations are beginning to slash waiting times. But will it prove enough? When, ultimately, can we expect the waiting list crisis end?

While far fewer people may be waiting two years for an operation, 306,000 still face delays of more than a year – and the list is growing. In total, 6.4 million people in England are waiting for an op – a record high. 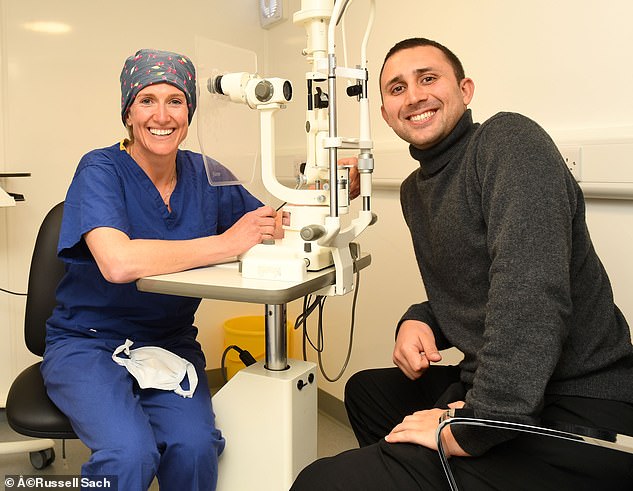 ‘Prior to the pandemic the target for routine procedures was within four months,’ says David Maguire, from the health think-tank The King’s Fund. ‘So while it’s good that fewer people are waiting less than two years, delays should never have reached this point.’

And so to the possible solutions. One is surgical hubs, like the cataract one run by specialists at the Stoke Mandeville hospital in Aylesbury.

Most NHS patients can expect to wait six months for cataract operations – of which 300,000 are performed every year. Those who are referred to this centre face the shortest delay for eye surgery in the country, waiting an average of just one month.

As the hubs focus on one treatment, they don’t get clogged up with patients who need emergency surgery, such as after a car accident. It means even when hospitals are at their busiest, the surgical hub’s schedule is not interrupted.

Professor Neil Mortensen, of the Royal College of Surgeons of England, says hubs ‘build a wall’ between planned surgery and emergency ops. 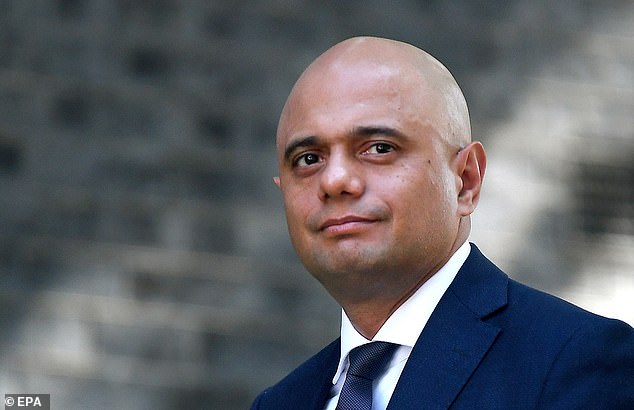 On Monday, Health Secretary Sajid Javid announced that the number of people waiting more than two years for operations such as hip replacements, eye operations and heart surgery had halved in just four months

‘In a district hospital, the beds we need for patients having planned operations get filled with emergency cases,’ he says. ‘You don’t have enough beds to cater for everyone, or space in the operating theatre – and you can’t perform enough planned operations.’

At the hub there are two surgical theatres, a waiting room, a clinic room for doctors to have private consultations with patients, a toilet and not much else.

But the smoothness of the operation is impressive, with no patients hanging around in corridors.

In the waiting room I find Shirley Abarca, 71, a retired nurse from Amersham, Bucks, who is wearing an eye-patch, having just had an operation to treat a cataract in her right eye. A month ago, she had the left one done – just two weeks after she was referred. Despite a bit of soreness, she is in high spirits. Two months ago she couldn’t drive in the evenings, and was reluctant to leave the house to go shopping because her sight was so poor.

Now, she has ‘new eyes’. ‘I’m seeing much better out of my left eye,’ says Shirley. ‘I’m sure my right eye will recover just as quickly.’

Shirley’s local hospital, a 40- minute drive from Stoke Mandeville, stopped doing cataract surgery, due to a lack of staff. And that’s another benefit of surgical hubs – they are often mobile. This building is designed to fit on the back of a lorry, consultant ophthalmologist Dr Sarah Maling and co-creator of the hub tells me.

‘You could take it where it is needed the most,’ she says. ‘If one of the nearby hospitals needed extra cataracts capacity, or somewhere far away, like Newcastle, we could send it to them.’

I’m confident that we can keep pushing waiting times down – especially now that the worst of Covid is well and truly behind us.

Another vital challenge facing the Government is how to cope with ongoing, increasing demand.

So the other arm to the delay-beating strategy is to catch disease earlier, treat it quickly with medication and other remedies, and prevent the need for operations. Fundamental to this are more than 100 centres that deal only with spotting signs of disease. These ‘one-stop shops’ are being built in the centre of communities – such as high streets and shopping malls – offering tests from breast cancer screening to hip and joint examinations.

Most patients are referred by their GP after complaining of an unusual pain, lump or ache. Doctors want to rule out serious conditions such as cancer, but also want to avoid adding patients to the extensive hospital waiting lists. At least one million checks have been carried out so far, according to Mr Javid.

Prof Middleton, an orthopaedic doctor at University Hospital Dorset, says that the one-stop diagnostic shop gives patients fast-track access to consultants, saving them from being ‘bounced around’ GPs, radiographers and physiotherapists before they see a specialist.

I visited one of the first diagnostic centres, the Dorset Health Village in Poole. It is squashed behind Greggs and Poundland, inside the Dolphin Shopping Centre.

Patients walk through the homeware section of Beales department store to get there. They are then ushered in by a volunteer who walks them to one of the clinics, each dedicated to hip or joint replacement surgery, breast cancer screening or eye tests to scan for glaucoma. Most patients emerge again after just 20 minutes.

Ashleigh Boreham, an ex-army logistics officer who helps runs the Dorset Health Village, says the team behind it aimed for the efficiency of the Covid vaccination hubs: ‘There, people were constantly flowing through, never stopping, so we thought, why can’t a hospital work like that?’

Another element is that doctors are relieved of paperwork, so have more time to tend to people. Patients document medical history themselves – via a form – and prescriptions and follow-up appointments are handled by junior staff.

‘So much time as a doctor is wasted on admin,’ says Prof Middleton, who splits his time between the centre and a hospital. ‘An appointment lasts 30 minutes but you’ll spend only ten minutes talking about the patient’s problems. In this system, I only spend ten minutes with each patient, so I can see three times as many in a day.’

The Dorset Health Centre is operating well above standard NHS capacity. ‘At this rate we’ll do about 8,000 more appointments this year than we would in hospital,’ says Dr Mahesh Ramchandani, consultant ophthalmologist at University Hospital Dorset.

Surgical hubs and diagnostic centres are not the only tools NHS chiefs are pinning their hopes on – a number of hospitals are also running ‘priority weeks’ in a bid to clear backlogs.

This involves doing just one type of planned surgery or invasive scan over five days, when the majority of the surgical staff and operating theatre capacity will be dedicated to this speciality.

Barking, Havering, and Redbridge University Hospitals Trust in London has pioneered this strategy. Last year Redbridge ran a ‘bones’ week which focused on joint surgery, and a week dedicated to internal endoscopy scans which pick up problems, including cancers, in the bowel and stomach.

In 2010, the average wait for an operation in Britain was five weeks. Today, it’s 12 weeks.

‘In a week we cut our wait times for an endoscopy by a third,’ says Amalesh Thangadorai, director for surgery at the hospital.

‘This led to a reduction in the endoscopy backlog in North-East London and everyone can get one in six weeks.’

And then there’s the hotly debated involvement of the private sector – which has increased significantly in the past year.

In February, local NHS chiefs were told to send any patients in desperate need of planned surgery, such as hip operations and cataracts, to nearby private hospitals. Three-quarters of private hospitals are now carrying out NHS elective procedures.

‘Bringing in independent providers has been a big help,’ says Prof Middleton. ‘It’s allowed us to clear those who have been waiting up to two years for treatment.’

Most of the doctors I meet say, providing these measures are expanded nationwide, we’ll likely meet Mr Javid’s goal of eliminating one-year waits for surgery by 2025. They expect two-year waits will be mostly gone by July, as per NHS England’s target.

But one key challenge will hold the health service back, if it’s not tackled soon.

‘The biggest problem facing the NHS right now is a lack of staff,’ says David Maguire, of The King’s Fund. NHS figures show there are nearly 100,000 staff vacancies in the health service.

‘Until this is sorted, hospitals are going to fill with emergency patients because there aren’t enough doctors and nurses to treat them,’ says Prof Middleton.

But the Government’s unprecedented recruitment drives are, according to Ministers, already making a difference: figures published last month suggested there’s more doctors working in the NHS now than ever before.

Prof Middleton adds: ‘I’m confident that we can keep pushing waiting times down – especially now that the worst of Covid is well and truly behind us.’