Eyebrow queen Kristin Fisher hits the beach in a bikini

And the beauty therapist put the turmoil of her drug scandal behind her on Thursday as she enjoyed a relaxing day at Camp Cove Beach in Sydney.

The 36-year-old businesswoman kept a low profile in a dark green New York Yankees baseball cap and sunglasses while soaking up the sun.

Brighter days: Celebrity eyebrow queen Kristin Fisher put the turmoil of her cocaine scandal behind her on Thursday as she enjoyed a relaxing day at Camp Cove Beach in Sydney

She wore a green bikini underneath white linen shorts, and carried a pair of brown Yeezy slides in one hand.

After sunbathing alone for a while, she scrolled through her iPhone on the sand.

‘This whole cocaine culture, particularly in the eastern suburbs, has to end,’ he told The Daily Telegraph on Thursday.

‘It’s an illegal substance for good reason. No one, regardless of celebrity status or influence, should be allowed to pollute our community with illicit drugs.’

Short shorts: The 36-year-old businesswoman wore a pair of white linen shorts, which she adjusted before relaxing on the sand 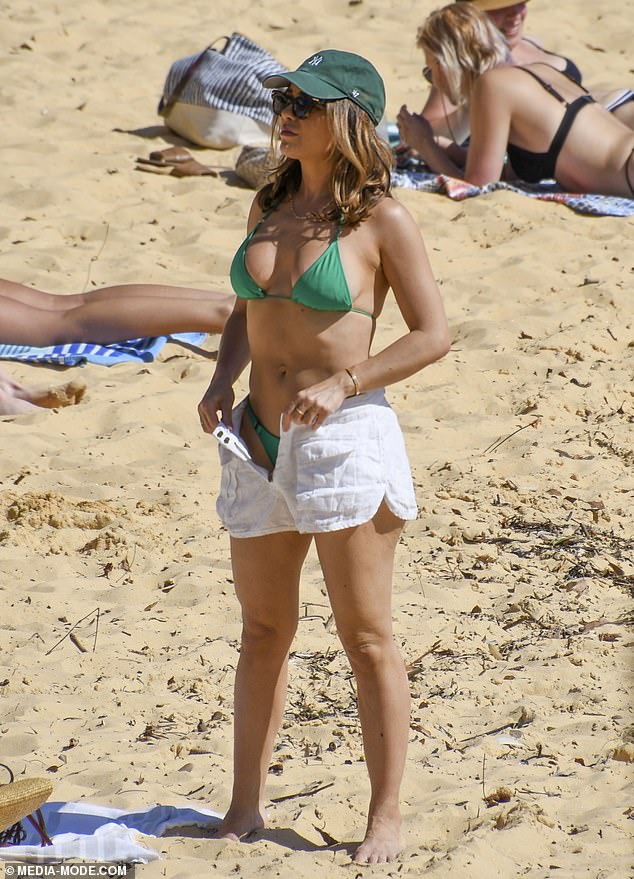 Sun smart: The beauty therapist kept a low profile in a dark green New York Yankees baseball cap and sunglasses while soaking up the sun

Magistrate Ross Hudson had reprimanded Kristin on Wednesday at Waverley Local Court after she had her conviction for cocaine possession annulled.

‘People who justify their cocaine usage as socially acceptable or as part the social fabric… it is not,’ Magistrate Hudson said.

‘It is a criminal, illegal drug. It is a stain on our community.’

He said he was seeing similar cocaine crimes ‘almost daily’ and that they had unfortunately become part of the ‘social fabric’ in Sydney’s eastern suburbs. 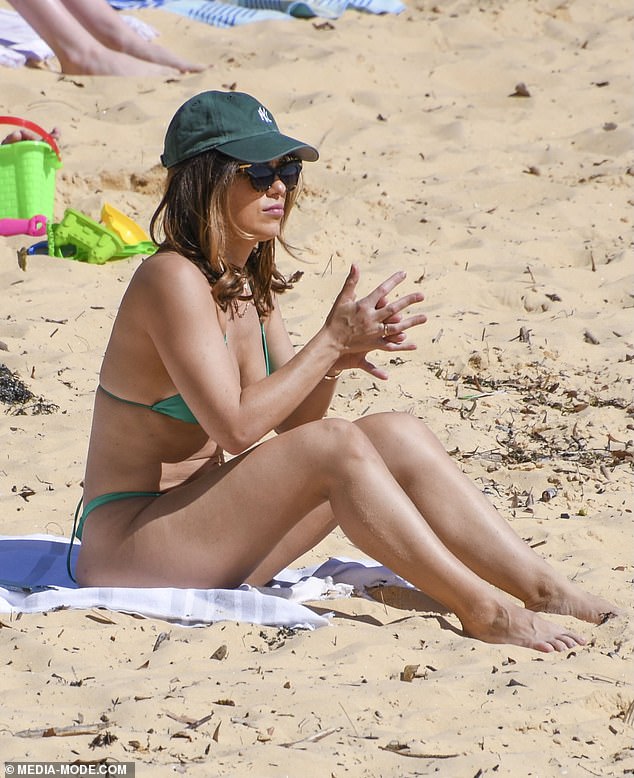 Sunny days ahead: The sunshine beamed down on Kristin as she topped up her tan 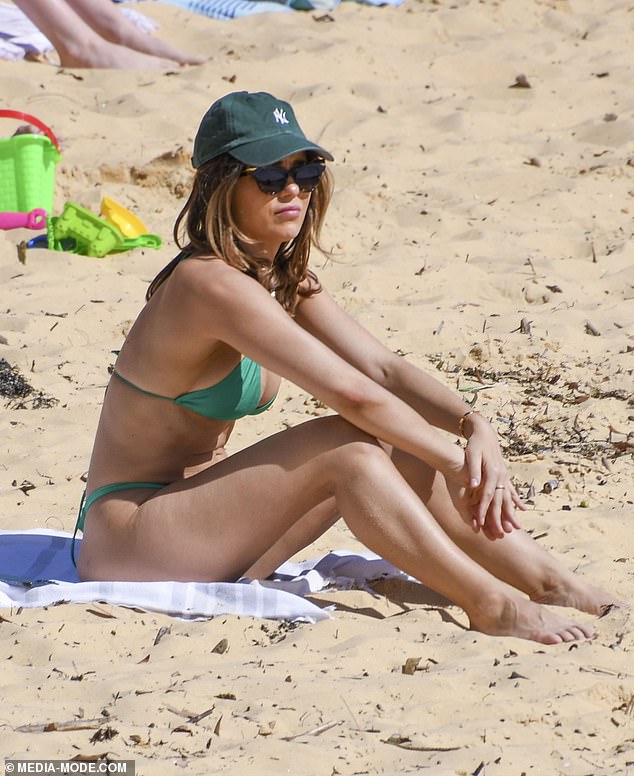 Nonchalant: She appeared to be contemplating things as she stared out towards the ocean

The socialite had appeared in court to ask the magistrate to wipe her criminal conviction and accept her explanation.

She said she’d made a ‘dreadful mistake’ when she was caught in the backseat of a cocaine dealer’s car in July, and promised she would never use drugs again.

Fisher had been convicted in absentia a fortnight ago when she failed to turn up to court on three occasions after being charged with drug possession.

But the conviction was annulled on Wednesday so that she would have a chance to plead her case. 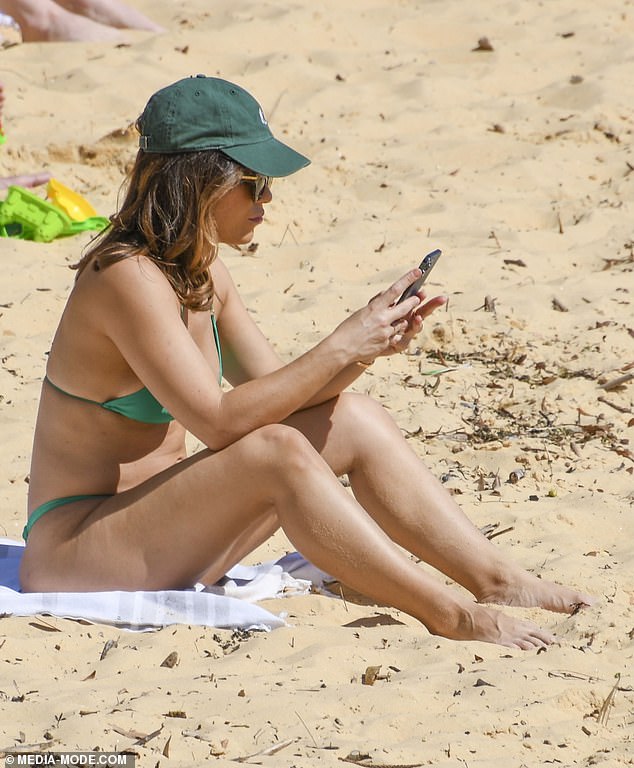 Checking Instagram? The socialite was focused on her iPhone 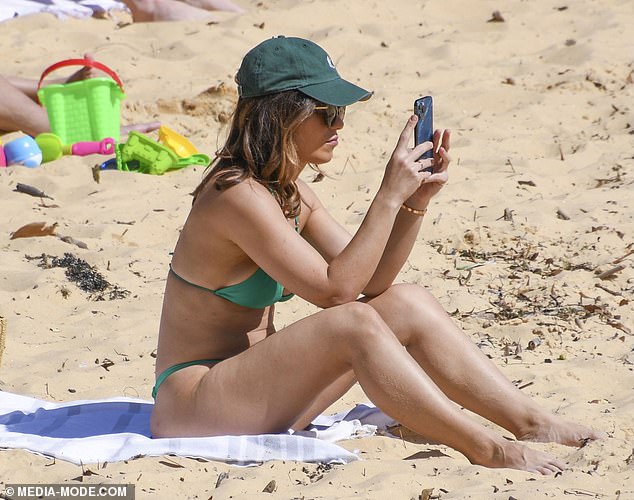 Better angle? She moved the phone up slightly, perhaps in order to reduce the screen glare

The mother of two had been found in the passenger seat of a drug dealer’s Kia Rio ‘frantically’ trying to evade police on July 17, with two bags of cocaine at her feet.

Fisher said the paperwork for her drug charge disappeared from its spot on her fridge, which she argued was likely the handiwork of one of her two children, aged six and eight.

‘She put the yellow slip on the fridge door with a magnet. She thinks one of the kids took it [and] every day she has checked in the mailbox for the letter to come as the police officer had indicated and nothing arrived,’ her solicitor Michael Bowe told the court. 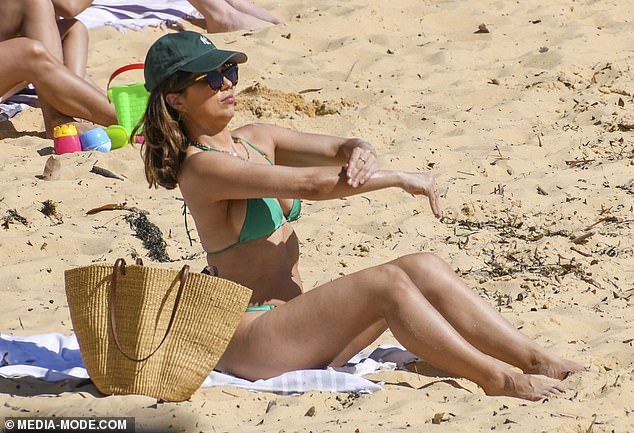 Slip, slop, slap! Kristin smothered herself in sunscreen to protect herself from the sun 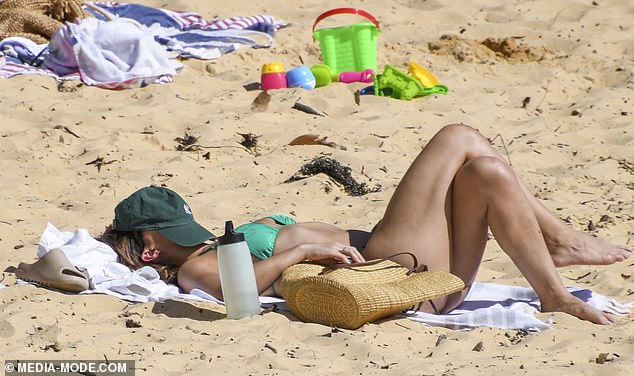 Beachy: She reclined on the towel and placed the cap over her face

After her first no-show, Magistrate Hudson ordered notices be sent to Fisher’s address informing her she’d missed court and that he’d rescheduled it for August 24.

When the date rolled around and both Fisher and her lawyer were nowhere to be seen, he again arranged for letters to be sent in the mail.

An email was also sent to the web address she provided to police, the court heard.

‘I made a dreadful mistake… I remember going home and sitting in silence for hours and I was deeply embarrassed. I have vowed I will never do it again,’ Fisher said in a letter to the court. 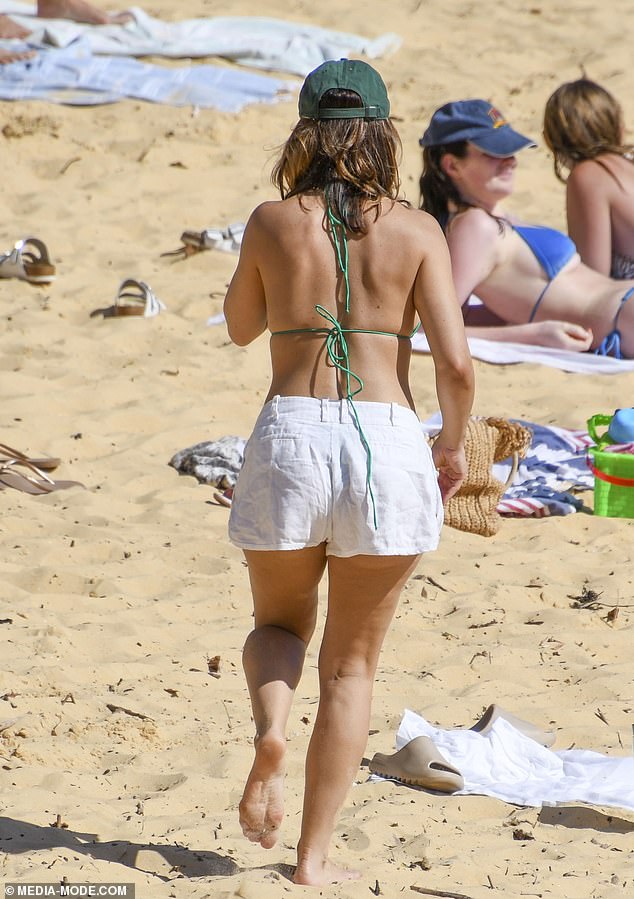 Time to go! Kristin stood up and made her way back home after her fun day in the sun

Fisher’s solicitor Mr Bowe said: ‘Her referees speak glowingly of her. She’s a community person who gives back from the success she’s had in her business.’

Mr Bowe noted Fisher had endured an ‘extremely difficult time’ after the loss of her friend and general manager to suicide and the repeated Covid lockdowns.

Magistrate Hudson accepted the guilty plea and said no conviction would be recorded if Fisher was of good behaviour for six months.

‘Your reputation is what you’re riding on,’ he said. ‘In terms of who you are and what you do, it’s about your reputation.

‘Not withstanding the years and years to build your reputation it takes seconds to destroy it. Hopefully you can now reflect on that.’

Fisher is one of Sydney’s most in-demand beauticians and runs a salon in the affluent eastern suburb of Double Bay. 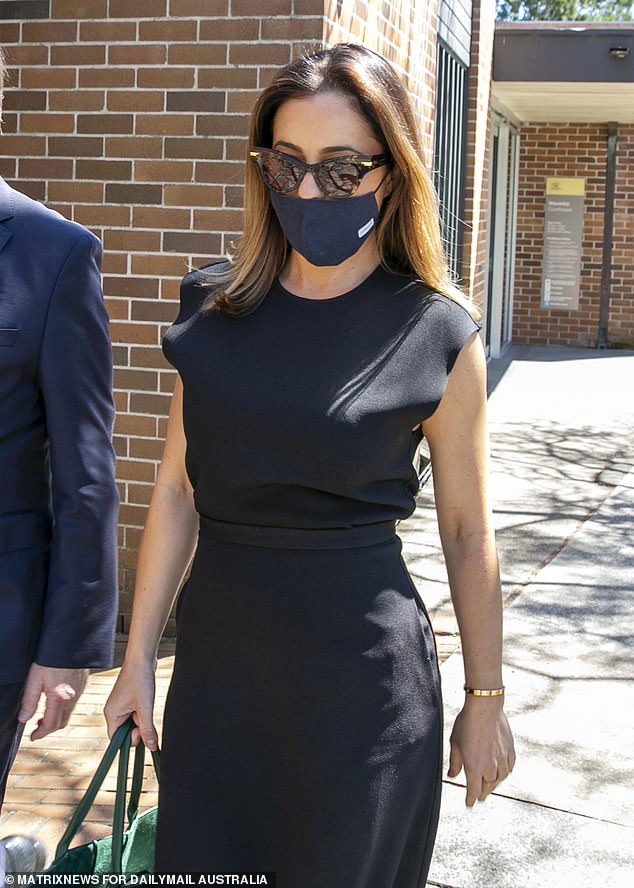 Annulled: The celebrity eyebrow queen had her conviction for cocaine possession annulled earlier this week. Pictured outside court on Wednesday