Ezekiel Elliott’s six-game suspension is back on

A federal judge cleared the way Monday night for the NFL to enforce a six-game suspension of Dallas Cowboys running back Ezekiel Elliott over domestic violence allegations.

Failla put the ruling on hold for 24 hours to give Elliott’s legal team time to appeal, a likely move.

It’s the second time a federal ruling has overturned a reprieve that kept Elliott on the field.

Earlier this month, a federal appeals court threw out a Texas court’s injunction and ordered the dismissal of Elliott’s lawsuit there.

The NFL briefly enforced Commissioner Roger Goodell’s suspension before a judge sitting in for Failla in the Southern District of New York issued a temporary restraining order that blocked the punishment for the second time.

If the suspension holds this time, Elliott will be out starting Sunday at home against Kansas City.

He will be eligible to return for the final three games, starting December 17 at Oakland. 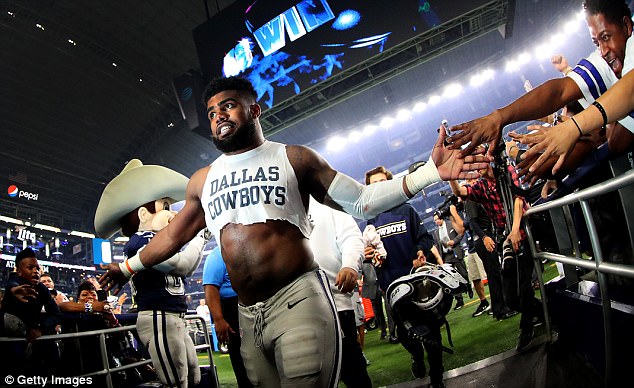 Elliott, if the suspension holds, will be out starting with Sunday’s Dallas Cowboys game against Kansas City and would continue until the final three games of the season. Elliott is pictured in November 2016 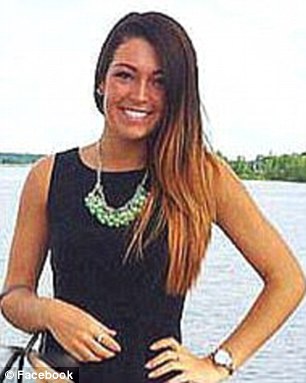 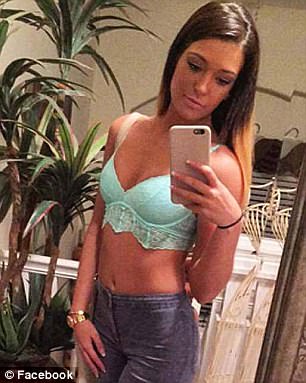 Elliott is accused of getting into physical altercations with his former girlfriend, Tiffany Thompson

The Cowboys (4-3), defending NFC East champions, are in second place in the division.

Elliott attended the roughly two-hour hearing in New York on Monday, a day after rushing for 150 yards and two touchdowns in a 33-19 win at Washington.

One of Elliott’s lawyers and an NFL spokesman didn’t immediately respond to requests for comment after the ruling.

The 22-year-old Elliott was suspended in August after the league concluded following a yearlong investigation that he had several physical confrontations in the summer of 2016 with Tiffany Thompson, his girlfriend at the time.

Prosecutors in Columbus, Ohio, decided not to pursue the case in the city where Elliott starred for Ohio State, citing conflicting evidence.

Elliott denied the allegations under oath during his NFL appeal. 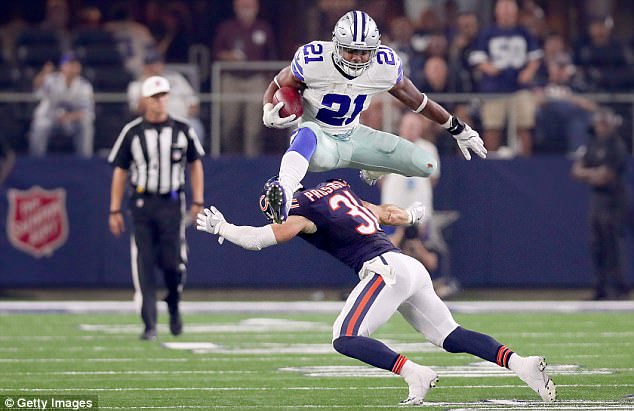 Elliott is pictured hurdling over Chris Prosinski of the Chicago Bears. Elliott was suspended in August 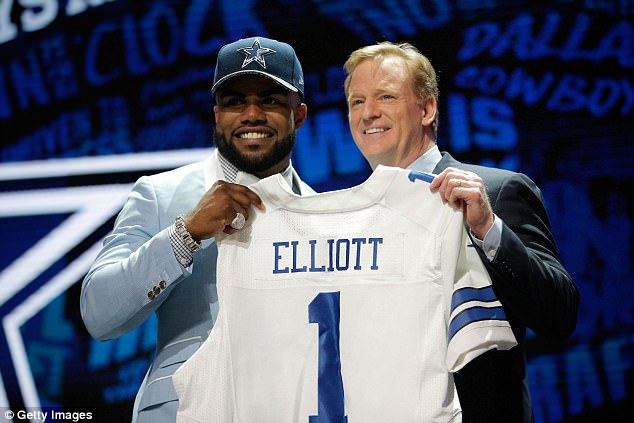 The suspension’s announcement led to weeks of court filings, with NFL Players Association lawyers contending league investigators withheld key evidence from Goodell and that the appeal hearing was unfair because arbitrator Harold Henderson refused to call Goodell and Thompson as witnesses.

Unlike three federal judges before her, Failla rejected most of those claims and backed the NFL’s contention that it followed the collective bargaining agreement in suspending Elliott, and that those procedures were supported by federal labor law.

‘Having negotiated with the NFLPA over the terms of a particular CBA, the NFL has an interest in obtaining the benefit of its bargain — an interest that might well be eroded if courts such as this one were permitted to micromanage the disciplinary decisions of the commissioner,’ Failla wrote.

The judge also said some of the reasons for Elliott’s claim that he would suffer irreparable harm with a suspension were speculative.

‘And any individual honors Elliott might attain absent suspension depend on countless variables — such as the Cowboys’ overall offensive performance, his opponents’ defensive performance, and Elliott’s health — that together render this alleged harm far too speculative to justify injunctive relief,’ Failla wrote.

Failla based some of her rulings on the NFL’s successful appeal in the same jurisdiction in the Deflategate case that ended with New England quarterback Tom Brady serving a four-game suspension.

Brady delayed the punishment more than a year by winning a district court ruling. 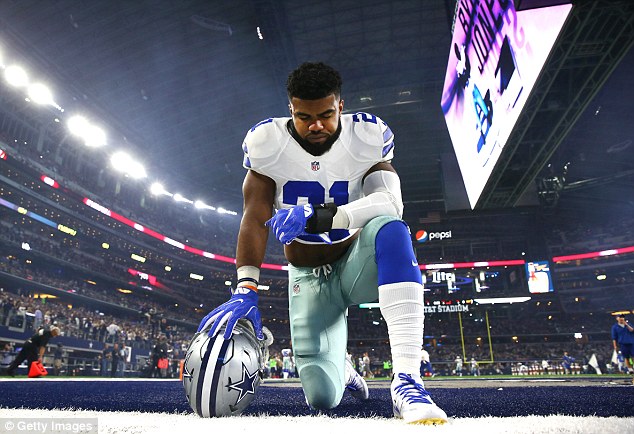 Elliott, pictured in December 2016. His attorneys will have 24 hours to file an appeal. They will likely do so 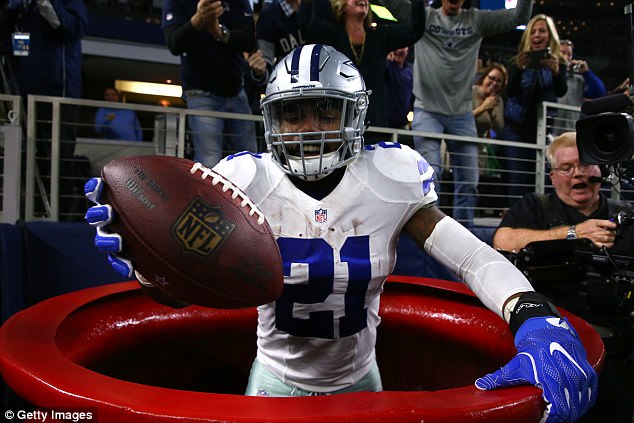 Elliott is pictured in December 2016. Failla wrote in her decision: ‘And any individual honors Elliott might attain absent suspension depend on countless variables — such as the Cowboys’ overall offensive performance, his opponents’ defensive performance, and Elliott’s health — that together render this alleged harm far too speculative to justify injunctive relief’

NFLPA lawyer Jeffrey Kessler argued before Failla that the hearing was ‘fundamentally unfair’ because it downplayed the conclusion by an internal investigator that Thompson wasn’t credible in her account.

Failla disagreed, writing that testimony from the NFL appeal hearing made it clear that Goodell was aware of the investigator’s views.

She also backed the NFL’s interest in timely penalties under its personal conduct policy, which three years ago was changed to stiffen penalties in domestic cases.

Elliott is third in the NFL in rushing with 690 yards in seven games. He’s tied for the league lead with six rushing touchdowns.

The initial decision to suspend the 2016 NFL rushing leader came in early August despite prosecutors in Columbus, Ohio, deciding a year ago not to pursue the case involving Elliott’s girlfriend at the time in the same city where Elliott starred for Ohio State.

The league said there was ‘substantial and persuasive evidence’ that Elliott had physical confrontations last summer with his then-girlfriend, Tiffany Thompson.

According to previous testimony, the star said that he believed his ex-girlfriend had an affair with his former teammate Lucky Whitehead.

‘He and I started talking over social media,’ Thompson said, according to the NFL players’ union’s investigative report. ‘We weren’t really dating. Ezekiel found out and I blocked Lucky from my phone.’

An investigator on the case said Thompson told her that Elliott had become mad that she was dating ‘some guy’ and confirmed that the person was Whitehead.

When Elliott was asked about the Whitehead situation, he said he was ‘p***ed off’ about it and that Thompson had taunted him with text messages insinuating that she had sex with his former teammate.

Elliott has claimed that Thompson continued harassing him after ending their relationship.