A television crew recorded a Belgian F-16 fighter in flight shortly before it crashed into a house and burst into flames in a French field today.

One pilot was left hanging from a high-voltage electricity cable for two hours after successfully ejecting but getting his parachute caught on the wire.

Footage captured by TV Vannes shows the plane, which was travelling from Belgium to a naval base in Morbihan, flying low over a cluster of trees just before it crashes, out of shot of the camera. 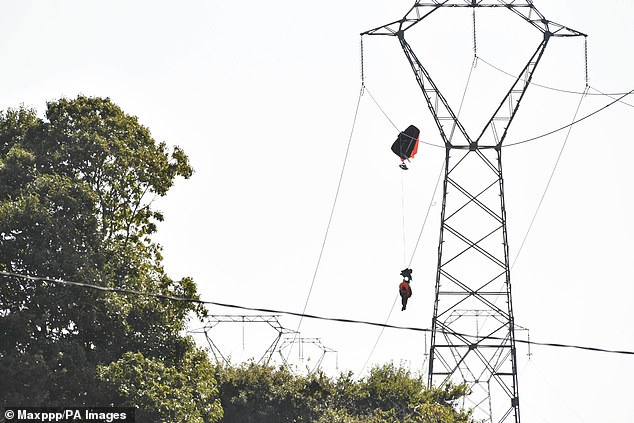 Director of Programming for TV Vannes, Jean-Marie Peron told the Mail Online they were on a location scout for a movie when they spotted the plane fly by four times, very low and fast across the trees.

‘[It was] doing very acrobatic manoeuvres, loops…upside down flight. The sight and sound was impressive.’

He said because the plane was speeding by so fast, across the village and over the surrounding trees, they did not have time to capture the first couple of flights.

But the cameraman, Corentin Julien, managed to capture the final few moments as the plane flew overhead.

Mr Peron said it was not till later that afternoon that the crew was ‘most surprised’ to learn the jet had actually crashed. 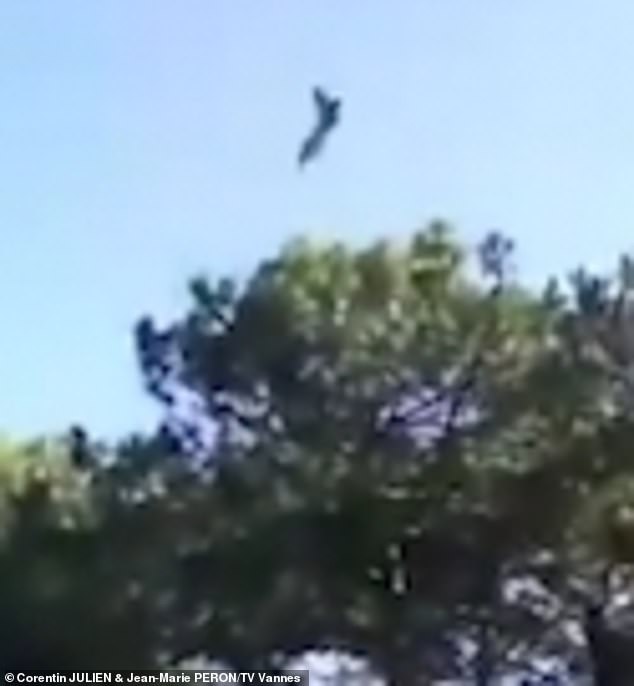 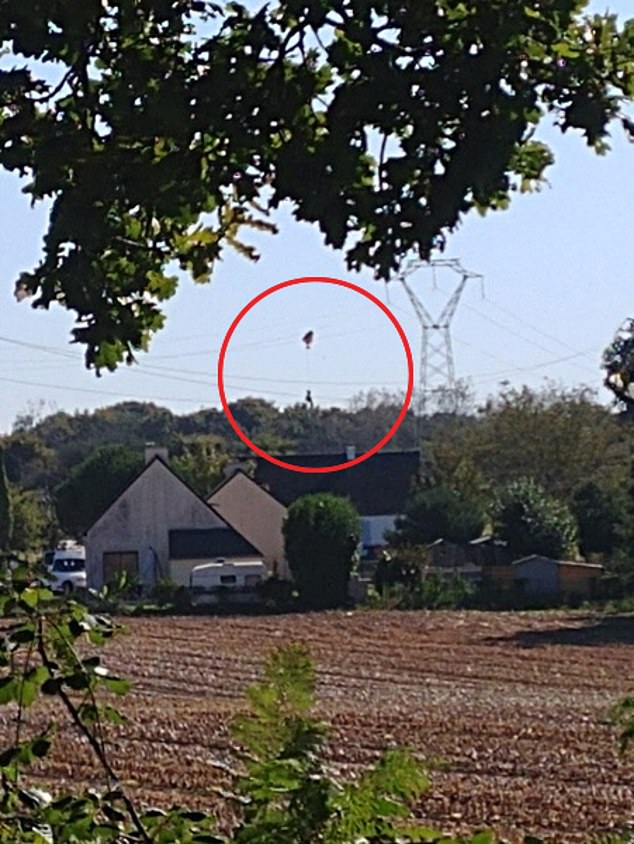 A photograph shows the pilot in the distance as his parachute got caught in the high voltage wires. Emergency services turned off power in the area and evacuated nearby residents as they worked to free him from the electric line

Emergency workers extracted the pilot safely, after cutting off power in the area, and he was taken to a nearby hospital for medical checks, a spokesman for the regional administration said.

Surrounding homes were evacuated as the pilot was rescued and firefighters battled the blaze from the crash which happened between the towns of Pluvigner and Landaul.

Shortly after the crash, a national police spokeswoman confirmed no-one else was injured in the crash. She said about 100 police were at the crash site investigating. 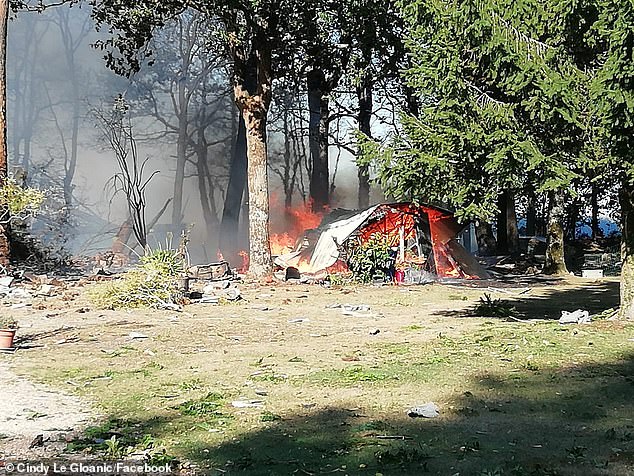 Pictures on social media show the plane wreckage in flames in a field near the town of Pluvigner, in western France 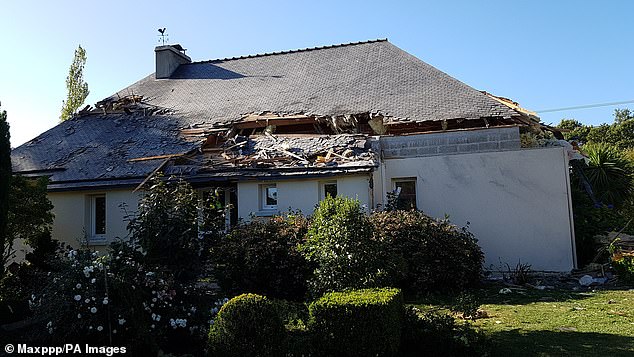 Local resident, Ludovic Kauffer, lives in the damaged house in Pluvigner, western France. He was at work at the time of the accident, but said his parents were home and described to him the ‘booms’ of the crash.

They described how one of the plane’s wings sliced the roof and facade of his house before plunging into a neighboring farm field.

‘My mother is in shock, my father is too,’ he said. ‘The most important thing is that everyone is OK.’

Local newspaper Le Telegramme showed images of the pilot hanging from the line, black smoke and flames rising from the area and a damaged house. 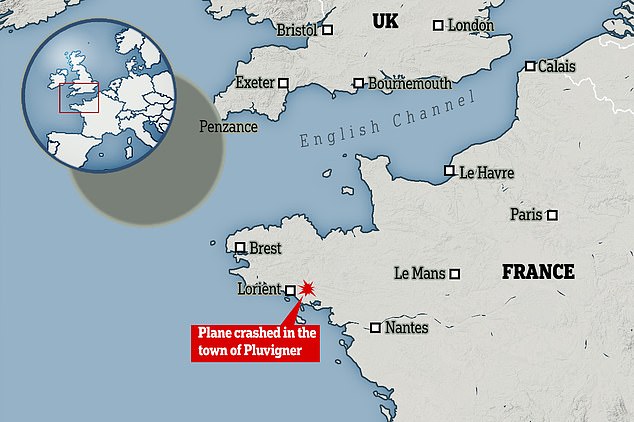 An eye witness said one of the plane’s wings sliced the roof and facade of a house on the outskirts of the town of Pluvigner, in Britanny, before plunging into a neighboring farm field 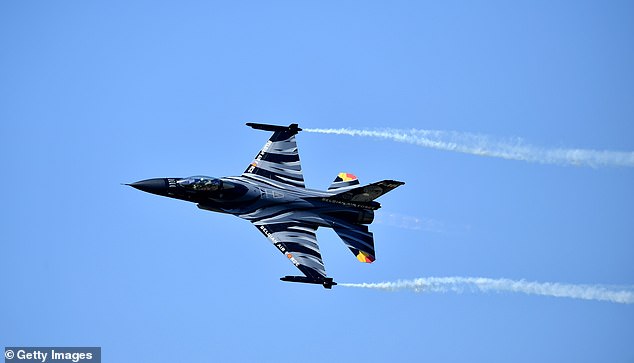 A stock image shows a Belgian F-16 fighter at an Airshow in Paris. It is similar to the one that reportedly crashed in western France today 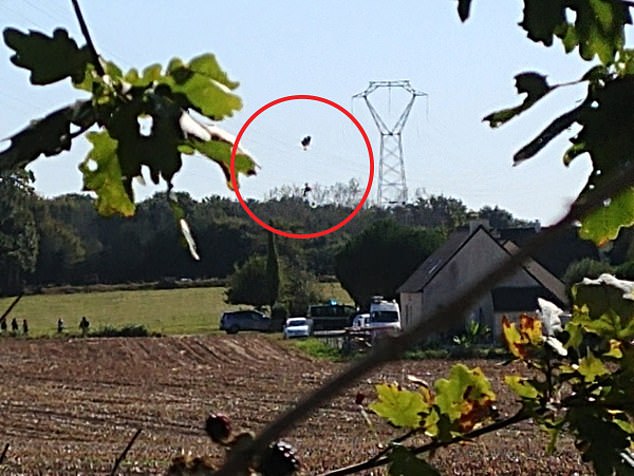 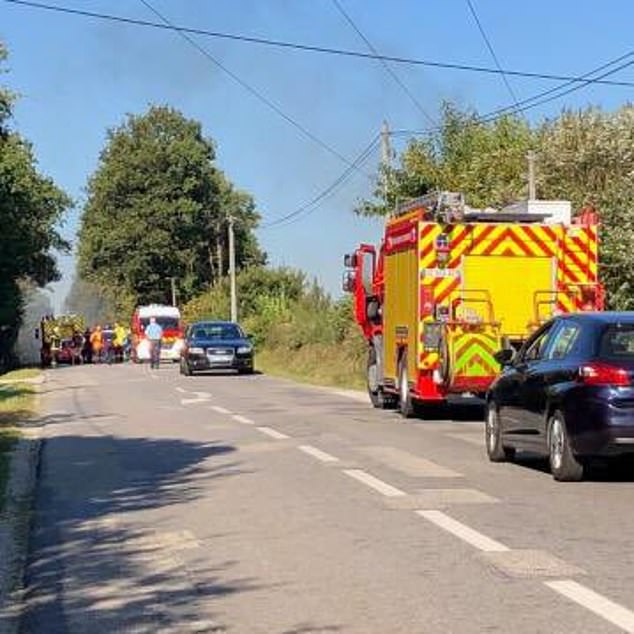 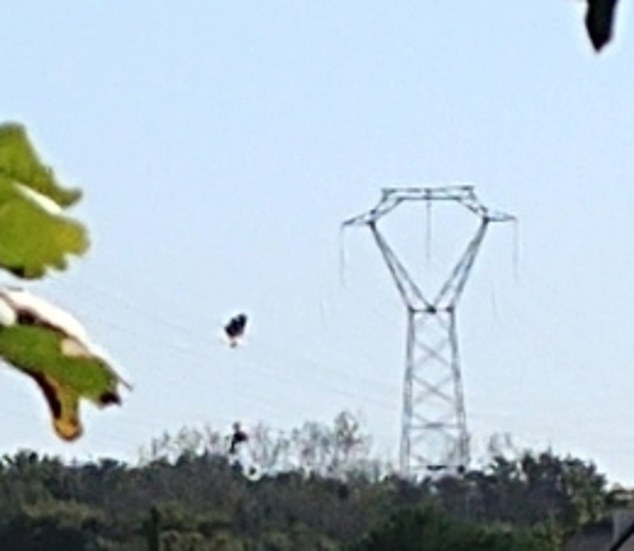 A spokesman for the local administration said alongside there had been a second pilot in the fighter jet, alongside the one who was caught in the high-voltage line.

The second pilot, managed to jump out safely.

Later in the day, on Twitter, the Belgian Air Force confirmed that the two pilots had been spoken to and both were in ‘good health’.

The unarmed plane was taking part in an exercise and had flown from the airline base of Florennes, near Namur in Belgium and was heading for the naval base in Lann-Bihoué (Morbihan) when it crashed.