The Football Association’s board has backed the plan to sell Wembley Stadium to Fulham owner Shahid Khan, the national governing body has confirmed.

The proposed deal, which is worth £600million in cash and £300million in future revenue from the stadium’s hospitality business, will now go to the FA Council’s next meeting on 11 October.

In a statement, an FA spokesperson said: ‘The sale of Wembley Stadium, the negotiated protections and an outlined plan to invest £600m into football community facilities, were presented and discussed at the FA Board meeting today.

‘Following on from this discussion, the FA Board has agreed to take the presentation to the FA Council to get its input now that the full facts are known.’

Prior to the crunch meeting, it had been widely reported that the three representatives from the national game, or grassroots football, harboured reservations about the sale and the desired unanimity would be impossible, effectively killing the plan.

That did not come to pass, though, and the FA’s leadership, which has pushed this idea for the past six months, will now be confident it can achieve majority support at the council. 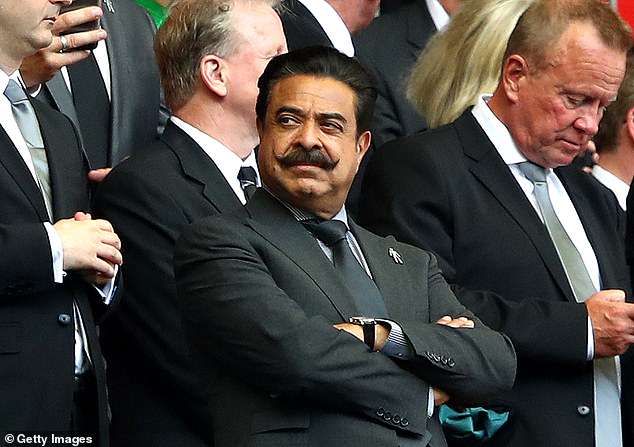 The terms of the deal have already been approved with Khan, who wants to base his NFL team the Jacksonville Jaguars at the stadium, and has been backed by the government, professional leagues and public bodies that invested in Wembley’s rebuilding.

Khan later released a statement welcoming the FA’s decision to sell Wembley to him.

‘The news from today’s FA board meeting is welcomed and encouraging,’ said the Fulham owner. ‘I understand the discussion was open and thorough.

‘One cannot ask for more as we continue to work through the process with the FA board, FA council, Sport England, the Mayor of London’s office and DCMS toward reaching an agreement that will serve English football for generations to come.

‘Today’s development has no effect on my plans to renovate Craven Cottage and, as such, has no impact on Craven Cottage continuing to be the permanent home of Fulham Football Club.’