Wearing a face mask can protect you from the coronavirus as well as stopping you spreading it to others, according to scientists.

Officials in Britain insist the main benefit of wearing face coverings is that they catch coughs and sneezes of the wearer, preventing them from spreading the virus to people around them.

But researchers argue the wearer may also benefit because they could inhale smaller quantities of coronavirus if they are exposed to it.

By reducing the amount of virus inhaled, it will make illness milder — and could even prevent deaths, according to a team at the University of California.

Rules on compulsory mask wearing differ across the world as governments weigh up the science on whether or not they are actually useful.

Evidence that was not available at the start of the pandemic is starting to show they are effective at controlling the spread of the virus.

Wearing a face mask can protect you from the coronavirus as well as stopping you spreading it to others around you, scientists claim. Pictured: Passengers on The Central Line on London underground wearing face coverings this morning 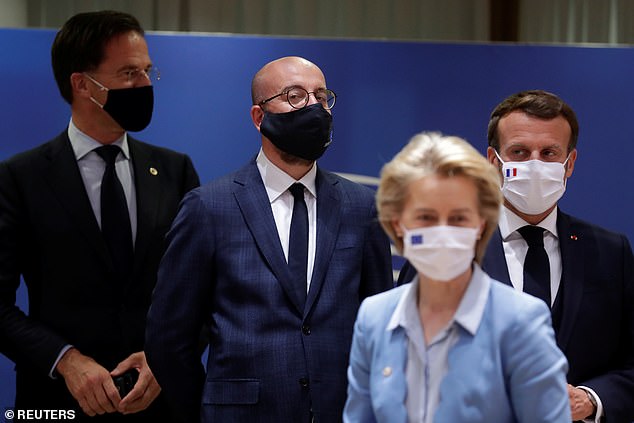 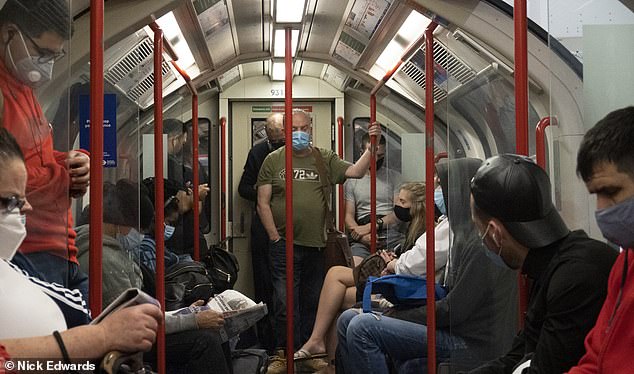 Recent evidence that was not available at the start of the pandemic has suggested they are effective at controlling the spread of the virus. Pictured: Passengers on The Central Line on London underground this morning

Dr Monica Gandhi, an infectious disease specialist at San Francisco General Hospital, was a co-author of the research which is due to be published in the Journal of Internal Medicine.

She told The Times: ‘You will get in a lower dose of virus if you wear a mask and are exposed to Covid-19 and are very likely to have mild or no symptoms.’

The latest work by the team based in San Francisco explains the ‘theory of viral inoculum’.

The inoculum is the amount or ‘dose’ of virus someone is exposed to. The higher it is, the more likely it will lead to infection in the recipient.

A lower initial dose of the coronavirus gives the immune system a better chance of fighting the disease. It may cause only mild symptoms or none at all.

It’s too early for there to be reliable data on how well they prevent infection with Covid-19, but the study found the thinner, cheaper masks do work in flu outbreaks.

So what about cloth coverings?

Although good quality evidence is lacking, some data suggest that cloth masks may be only marginally (15 per cent) less effective than surgical masks in blocking emission of particles, said Babak Javid, principal investigator at Cambridge University Hospitals wrote in the BMJ on April 9.

He pointed to a study led by Public Health England in 2013 which found wearing some kind of material over the face was five-fold more effective than not wearing masks for preventing a flu pandemic.

The study suggested that a homemade mask ‘should only be considered as a last resort to prevent droplet transmission from infected individuals, but it would be better than no protection’.

The paper, seen by The Times, draws on various bits of research to base their argument that masks help to reduce the inoculum.

A study on hamsters which showed those who were in a cage cloaked and protected by a mask material had mild disease compared to those who did not.

The researchers in Hong Kong said although it’s completely different to how humans interact, it showed ‘very clearly’ that covering the nose and mouth is hugely effective to mitigate spread.

The study was released by the department of microbiology at the University of Hong Kong but has not been peer-reviewed or published in a journal yet.

Outbreaks on cruise ships where passengers wore face coverings resulted in milder cases of the coronavirus, the University of California paper also said.

It has previously been reported that crew members who wore masks while on a coronavirus ridden US warship were protected from the virus.

Scientists closely monitored what happened on the USS Theodore Roosevelt when coronavirus broke out among military personnel on it in March.

Only 55.8 per cent of people who regularly wore a face covering caught the disease, compared to 80.8 per cent of those who didn’t.

Masks actually appeared to be more effective at stopping the spread of the disease than social distancing.

Weighing up the evidence, the team at University of California said: ‘Exposing society to SARS-CoV-2 without the consequences of severe illness with public masking could lead to greater community-level immunity and slower spread as we await a vaccine.’

In England, masks are currently only compulsory on public transport, but they are to become mandatory in shops from July 24.

Official guidance now also states people are also encouraged to wear face coverings ‘in enclosed public spaces where there are people they do not normally meet’.

Therefore, face coverings are advised in a place of worship but not necessarily the pub, where people would meet family and friends.

The complex guidelines, which have been further confused by ministers taking varying stances on the rules, do not apply to restaurants either.

It comes after months of conflicting information from world health bodies concerning masks and if the public should wear them.

The British government had previously feared that the advice would leave a shortage of surgical masks for healthcare workers.

But it came round to the idea of a nationwide rule on the basis that face coverings can stop contagious people spreading the virus.

Coverings catch droplets which are expelled from someone’s nose and mouth when they breathe, talk, cough or sneeze, and which carry the coronavirus inside them.

If these droplets cannot escape the mask and circulate in the air, they cannot be inhaled by other people or settle on surfaces where others might touch them.

But Dr Gandhi believes governments should expand their recommendations for the wearing of face coverings based on studies that say they may also prevent someone from catching a huge dose of the virus.

‘The research suggests that we should go towards universal population-level masking to control infections and to limit the severity of disease,’ Dr Gandhi said.

She said: ‘It really looks like any country that has adopted universal mask wearing – and many, many countries have – even as they open up and they’re seeing each other more and there’s more cases, it has led to much, much fewer deaths or severe illness.’