Face masks remnants found in the guts of sharks

Scientists have found microplastics and man-made fibres from disposable face masks in the guts of sharks off the Cornish coast.

More than two thirds of four species of seabed-dwelling sharks contained microplastics and other man-made fibres in their stomachs, they found.

Synthetic cellulose, one of the fibres that was collected, is widely used to make clothes and disposable hygiene products such as facemasks.

Widely-available face masks feature a layer of non-woven bonded fabric – commonly made of polypropylene – which give them a long afterlife after they are discarded and can end up in landfill or oceans.

A total of 379 particles were found in a the 46 sharks examined, although the impact of microplastics on the sharks’ health is unknown.

However, the four species of shark looked at are also eaten by humans, meaning any residual microplastics in their bodies could end up in our digestive systems.

Blue Olefin polyproylene fibres recovered from one of the sharks, which the researchers said were probably from a fishing net

MICROPLASTIC LEVELS ARE EXPECTED TO RISE

Microplastic pollution is ubiquitous in the marine environment and is ingested by numerous marine species, although sharks are an understudied group regarding their susceptibility to microplastics, the study authors claim.

‘We were surprised to find not only microplastics but also particles such as synthetic cellulose, which is most commonly found in textiles – including disposable hygiene items like facemasks – and clothing.’

When clothes are washed, or items are discarded as litter, tiny fibres are released and these often flow into water sources and out to sea.

‘You might put that in a washing machine and that releases fibres into water sources that go directly out to sea because they are so small,’ Parton said.

‘Once in the sea, microfibres can either float or sink to the bottom, which is where these sharks live.

‘The fibres could then be ingested via the sharks’ food, which is mostly crustaceans, or directly through the sediment they’re feeding in and around on the seabed.

‘In terms of the other types of microplastics we found, many of these may have come from fishing lines or nets.’

Due to the tiny size of the particles that the team have discovered, it’s likely they’re going to be excreted straight away. 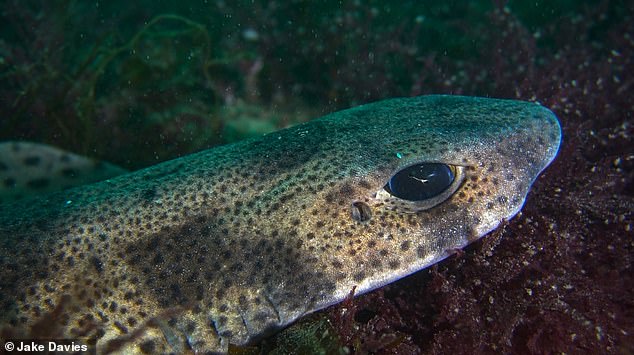 A small-spotted catshark, which live on and near the seabed and are also eaten by humans. The species is rarely eaten in Cornwall and many fishermen use it as bait. It is however edible and sometimes marketed as ‘sweet William’, according to the Cornwall Good Seafood Guide

‘However, if we can find that these fibres potentially contain inorganic pollutants and chemicals attached to them, that could have consequences on their reproductive system, their endocrine system and their immune system,’ Parton warned.

These species, known as demersal sharks, can be found at depths up to nearly 3,000 feet (900 metres) and usually live and feed near the sea floor. 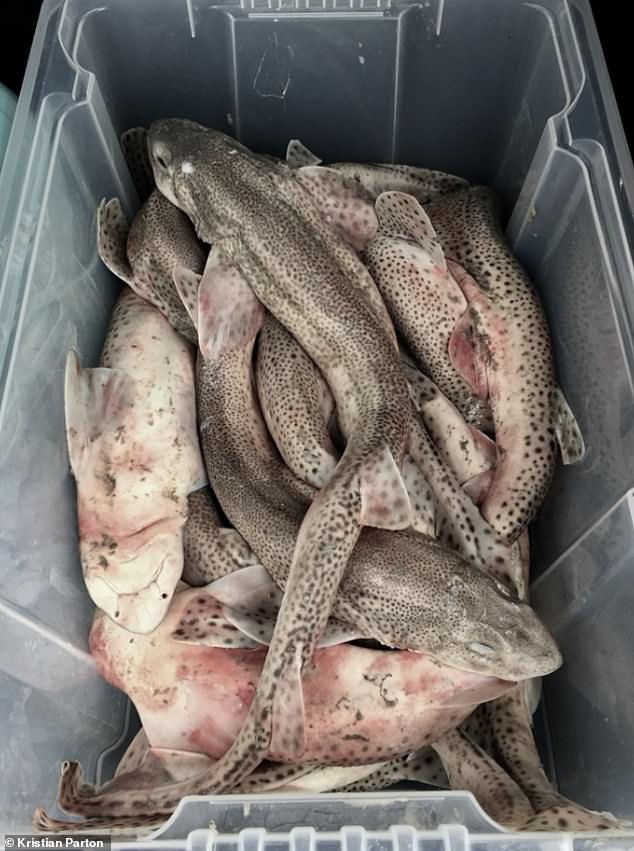 Stomachs and digestive tracts of 46 sharks of the four species were examined and 67 per cent of samples contained at least one contaminant particle.

A total of 379 particles were identified, leading to average estimates ranging from two to 7.5 ingested contaminants per animal for the four species.

The majority of contaminants identified – 95 per cent – were microfibres, from textiles and clothing.

Researchers revealed that the majority of the particles were blue (88 per cent) or black (9 per cent) in colour. 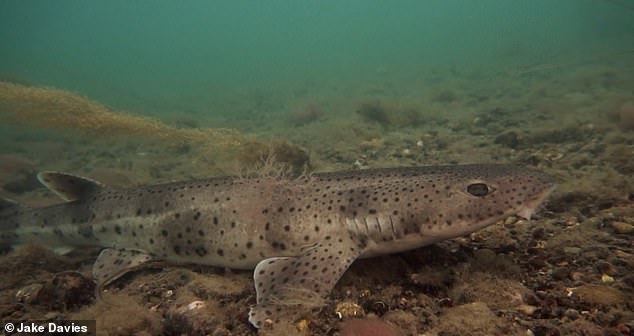 A bull huss shark, which typically reaches up to 5 feet and 25 lbs. It’s found predominantly around the southern and western coasts of the Britain

Larger sharks contained more particles, although no differences in plastic ingestion were found based on sex or species.

The team also took a sub-sample of the contaminants and subjected them to FT-IR spectroscopy, which passes infrared radiation through a sample, to learn more about their composition.

A third (33.3 per cent) were identified as synthetic cellulose, 25 per cent as polypropylene (used in clothing and the manufacturing of common plastics) 10 per cent were polyacrylamides (used in water treatment and present in cigarette smoke) and 8 per cent polyester, the synthetic fabric.

‘We were not expecting to find microfibres from textiles in so many of our native shark species,’ said study co-author Professor Tamara Galloway, of Exeter’s Global Systems Institute.

‘Our study highlights how important it is to think before we throw things away.’

The study was conducted in Cornwall using sharks caught as ‘bycatch’ (by accident) in a demersal hake fishery, fishing in and around the North-East Atlantic and Celtic Sea.

The findings were published in the journal Scientific Reports.

Rarely eaten in Cornwall and many fishermen use it as bait.

It is however edible and sometimes marketed as ‘sweet William’.

Lesser spotted dogfish numbers appear to be stable and increasing in some areas.

Feed on small invertebrates and fish which they pick up from the seabed.

Not historically targeted by fishermen but are often caught as by-catch.

Not often offered for sale in the UK.

North East Atlantic stock is now considered to be depleted.

Assessed as Critically Endangered in the North East Atlantic by IUCN.

Not generally targeted by Cornish fishermen although their meat is good to eat.

This species is rarely targeted but occasionally caught as bycatch by Cornish fishermen.

Little is known about the state of stocks.