Face masks will be compulsory in AIRPORTS and TRAIN STATIONS

Face coverings will have to be worn in shops, supermarkets and shopping centres as well as train stations and airports under new rules set to apply across England from tomorrow.

The Government this afternoon finally published its formal guidance on where the wearing of masks will now be mandatory.

However, places like restaurants, pubs and gyms will all be exempt from the restrictions.

Failure to comply with the rules could result in a £100 fine although the police have suggested that they will not be aggressively enforcing the policy, with ministers hoping members of the public will show ‘common sense’ on the issue.

The publication of the final set of face mask guidance comes after weeks of confusion after different ministers said different things about where the coverings would and would not be required. 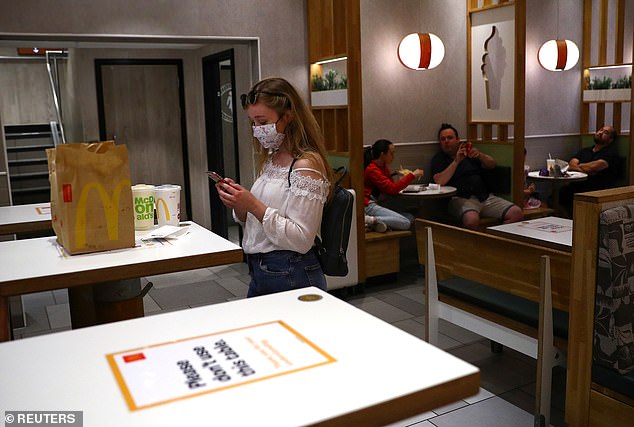 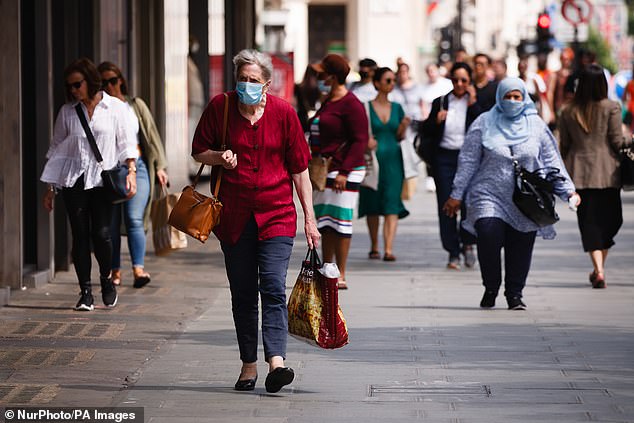 What are the new rules on face masks in England?

You must already wear a face mask on:

You must wear them from tomorrow in:

You do not have to wear one in:

The Government is hoping the long-anticipated shift on the compulsory wearing of masks will help to slow the spread of coronavirus.

But ministers remain under pressure over why they did not introduce the measures earlier, especially since the wearing of masks has been required in many countries across the world throughout the pandemic.

Face coverings have been required in England when travelling on public transport since June 15.

But they will now apply much more widely with the new regulations setting out that members of the public will need to wear face coverings – like a mask, scarf or bandana – that covers the nose and mouth when in numerous enclosed public spaces.

One of the main areas of confusion in recent weeks has been over whether the wearing of maks would be required when people visit takeaways.

The guidance states that they will have to be worn when buying food and drink to takeaway from cafes and shops.

However, if people are in a premises where they are able to sit down and consume food or drink that they have just bought, then the face covering can be removed in order to eat and drink.

Face coverings will not be mandatory for anyone under the age of 11, those with disabilities or certain health conditions, such as respiratory or cognitive impairments that make it difficult for them to wear a face covering.

Health and Care Secretary Matt Hancock said: ‘As we move into the next stage of easing restrictions for the public, it is vital we continue to shop safely so that we can make the most of our fantastic retail industry this summer.

‘Everyone must play their part in fighting this virus by following this new guidance. I also want to thank the British public for all the sacrifices they are making to help keep this country safe.’

Throughout the pandemic the UK Government had suggested that the wearing of face masks would provide little benefit and that they could even be counter-productive.

But the Government now says there is evidence to suggest that wearing a face covering, when done correctly, can reduce the chances of someone who has coronavirus passing it on to others.

This is particularly important for people who are asymptomatic and do not know that they are infectious.

The new rules make it illegal for people to fail to wear a mask in the settings listed above.

But the Government has stressed that ‘responsibility for wearing a face covering sits with individuals’.

As a result, businesses are being encouraged to take ‘reasonable steps’ to encourage their customers to comply. 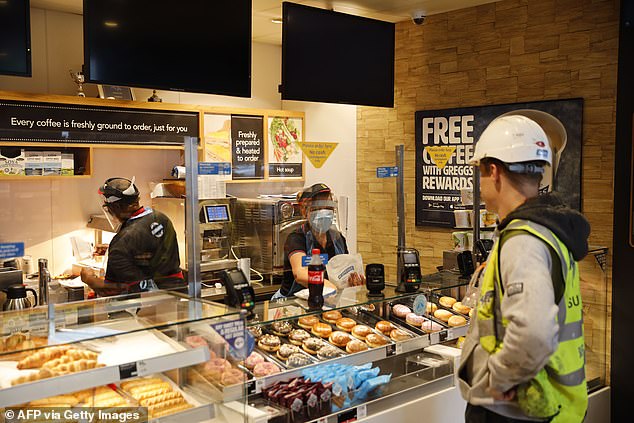 They are not being told to actually enforce the measures – that responsibility rests with the police.

However, Metropolitan Police chief Dame Cressida Dick has said that officers in the capital will not be responding to calls about shoppers refusing to wear a mask unless it is a ‘last resort’.

She told LBC that she hoped shoppers will instead be ‘shamed’ into wearing face masks in stores.

However, the wearing of masks will not be required in venues which have measures in place to protect staff and members of the public from the spread of coronavirus.

These include eat-in restaurants and pubs, hairdressers and other treatment salons, gyms and leisure centres and cinema, concert halls and theatres.

The rules on transport hubs mean masks will now have to be work at indoor train stations and airports as well as indoor bus and coach stations.

The Government has faced accusations of putting out a confused message on face masks in recent weeks after Mr Hancock had suggested they would be required when buying a takeaway, only for Number 10 to swiftly contradict him.

The Health Secretary said last week: ‘You do need to wear a face mask in Pret because Pret is a shop. If there’s table service, it is not necessary to have a mask. 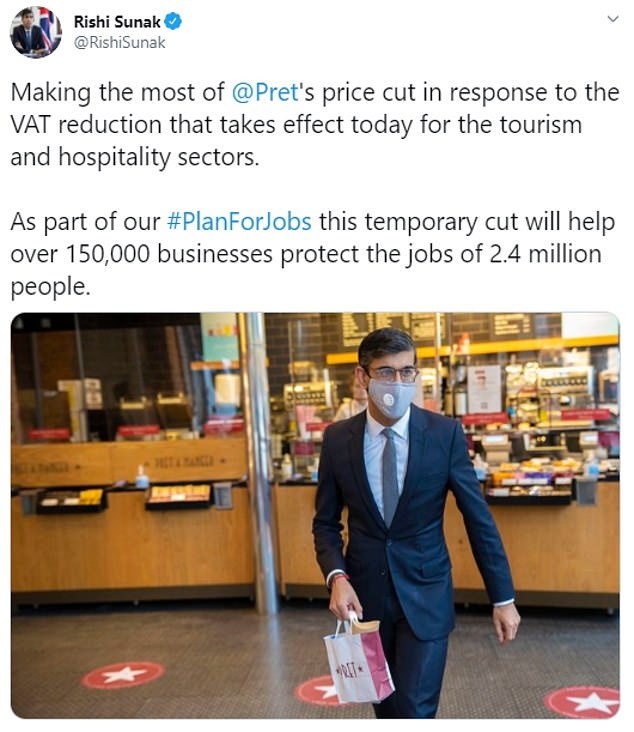 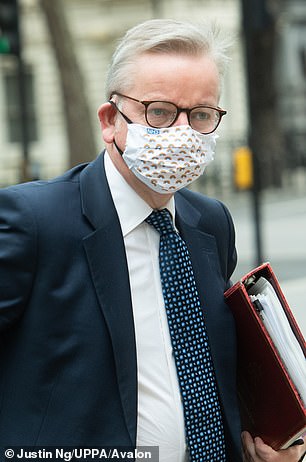 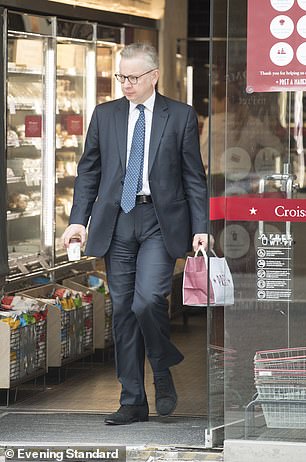 Conservative MP Michael Gove finally fell into line by wearing a mask in Westminster last week (left, on July 15) – after being pictured going into a Pret in London with a bare face one day earlier (right, on July 14)

But the Prime Minister’s Official Spokesman later said: ‘We will be publishing the full guidance shortly but my understanding is that it wouldn’t be mandatory if you went in, for example, to a sandwich shop in order to get a takeaway to wear a face covering.’

The sense of confusion only increased as Chancellor Rishi Sunak and International Trade Secretary Liz Truss were pictured wearing masks at a Pret a Manger in Westminster – while Michael Gove was photographed in the sandwich shop without one.

The timing of the publication of the new guidance has sparked anger among retail and hospitality chiefs because it has given them less than 24 hours to prepare.

Kate Nicholls, chief executive for UK Hospitality, told BBC Breakfast this morning: ‘When the measure on making face masks and face coverings mandatory was announced ten, 11 days ago, we did have two different messages coming out.

‘The Health Secretary suggested that you would need to have a face covering if you were going in for a takeaway. Number 10 later in the day said that you would not, and that they would be treated as hospitality businesses, because they are hospitality, they’re not retail.

‘We’ve now got a different message coming out from a Government minister today, which is 24 hours before the industry needs to act.

‘So we will of course do everything we can in our power to get ready in that time, to make sure that the messages are communicated, but we haven’t had that gap to get ready because we were told ten, 11 days ago that you’re hospitality, not retail.’

The wearing of face coverings is already mandatory in Scotland.

Q&A: What you need to know about face masks

Face coverings will be mandatory in shops and supermarkets from tomorrow. Under the new rules, people will need to have their nose and mouth covered or face a fine of up to £100. People with certain disabilities will be exempt. This comes after rules requiring people to wear face coverings on public transport became mandatory last month. Initially many experts and authorities, including the World Health Organisation (WHO), suggested face coverings were not effective in preventing the spread of Covid-19 but are now recommending wearing them in indoor spaces.

– Has there been confusion over the new rules?

Yes, opposition MPs have said it needs to be clarified whether customers have to wear face coverings in takeaways and sandwich shops in England. The criticism came after days of mixed messages with the Health Secretary and Boris Johnson’s official spokesman contradicting each other on the matter. The Daily Telegraph reported early today that people using sandwich shops and takeaways will be required to wear a mask, and buying food from the counter and then sitting down to eat inside the shop will be banned. But the Government refused to confirm the report ahead of the formal announcement.

– What does the science say about face coverings?

A report recently published by the Royal Society suggests that even basic homemade face coverings can reduce transmission if enough people wear them when in public. The study, based on mathematical modelling, showed that if an entire population wore face coverings that were only 75% effective, it would bring the R value, which is the number of people an infected individual passes the virus on to, from 4.0 to under 1.0, without the need for lockdowns. Another Royal Society report suggests the use of cotton masks is associated with a 54% lower odds of infection in comparison to the no mask groups, when tested in a healthcare setting. Melinda Mills, Nuffield professor of sociology, at the University of Oxford, told a webinar: ‘So that should suggest that when you’re generally in the public that it should offer you some, not 100 per cent, but it does offer you some protection.’ Meanwhile, another study which looked at coronavirus deaths across 198 countries found that nations which had policies favouring mask-wearing had lower death rates. In another piece of scientific research, published in the journal Proceedings of the National Academy of Sciences last month, scientists calculated that wearing face coverings prevented more than 78,000 infections in Italy between April 6 and May 9, and more than 66,000 infections in New York City between April 17 and May 9.

– What are the benefits to wearing them?

Experts say the risk of coronavirus transmission appears to be higher in poorly ventilated indoor spaces and wearing face coverings in small shops or enclosed shopping centres could help reduce the spread. Keith Neal, emeritus professor of the epidemiology of infectious diseases at the University of Nottingham, said: ‘Lack of strong evidence of their effectiveness should not be considered a problem but the evidence is accumulating that they have a part to play in reducing transmission and also in protecting the wearer.’ In addition, there is also increased evidence which suggests that many people with the virus who do not have symptoms can still be contagious.

– What do people need to know about wearing masks?

Ideally the face coverings should be made of multilayer high quality cotton. Where possible they should be should be worn in indoor confined spaces and crowded spaces, especially where social distancing cannot be maintained. Japan follows the three Cs, closed spaces, crowded places, and close-contact settings. When wearing a face covering, it should cover the mouth and nose with no gaps.

– Are some face coverings better than others?

The Who advises a three-layer face covering in the community – the outer layer should be water resistant, the inner should be water absorbent and the mid-layer acts as a filter. It emphasises that a face covering alone cannot protect people from Covid-19, and must be combined with social distancing of at least a metre and regular hand washing. The Government has said coverings can be made from scarves, bandanas or other fabric items, as long as they cover the mouth and nose. But scientists at the Leverhulme Centre, who studied different types of face coverings used by members of the public, say some coverings are not as effective as others, with loosely woven fabrics, such as scarves, shown to be the least effective. Prof Mills, director of the Leverhulme Centre, said: ‘Attention must also be placed on how well it fits on the face; it should loop around the ears or around the back of the neck for better coverage.’

– What are the main messages about face coverings?

Prof Mills says cloth coverings are an effective way to protect the wearer and those around them. She says that face masks and coverings cannot be seen in isolation and are part of a package that involves hand hygiene and social distancing. Consistent and effective public messaging is vital, she concluded.