The face of the only person to have ever assassinated a British Prime Minister has been revealed for the first time through a facial reconstruction.

John Bellingham, an angry businessman, shot dead PM Spencer Perceval in the lobby of the Palace of Westminster in May 1812, before later being convicted and hanged.

The assassin’s skull has been on display at the Queen Mary Pathology Museum in London and experts have now used it to reveal what the killer looks like – 116 years later.

Forensic experts at the Queen Mary University of London used computer software and a database of high-res photos to create the haunting image.

Carla Valentine, Museum Technician at Queen Mary’s Pathology Museum, said: ‘This is a novel way to engage the public with a previously one-dimensional ”specimen”.

‘In this project, we specifically opted to reconstruct a well-known figure in order to reinstate his personality.

‘A skull which has been denuded of its facial features – and therefore its identity – has less of an impact on a museum visitor than being able to see the person’s face.

‘The impersonal presentation of a skull can also be seen as creating a ‘spectacle’ out of the person, which is an issue when we work hard to display human remains to the public in an appropriate manner.’

The university came into possession of the skull because the punishment at that time for murder was to be hanged and anatomised.

The research team used a large database of high resolution photographs of other human faces to then create Bellingham’s own facial features. 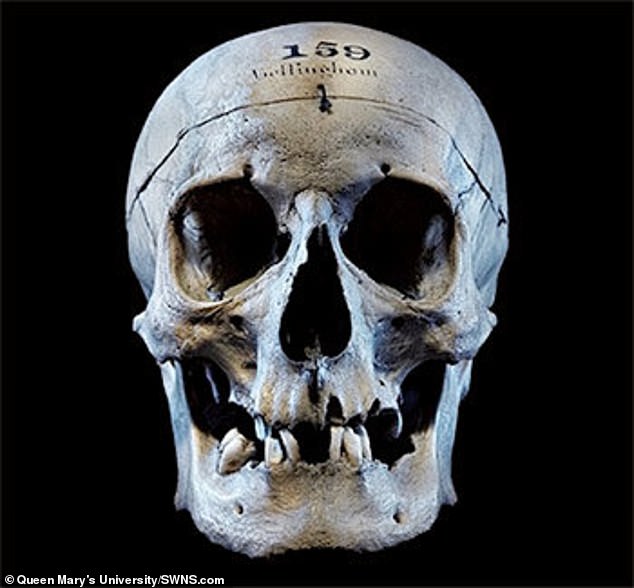 They used the assassin’s skull (pictured), which has been on display at the Queen Mary Pathology Museum in London

Each specific facial feature was also adjusted to fit with the underlying anatomy of Bellingham’s skull and facial muscles.

Finally, computer software combined the two together to complete the face.

Knowing that he was a male in his 40s and of British descent, forensic experts were able to use a database of tissue depth markers that apply to European males.

By doing this it was possible to gauge the thickness of the tissue that covered Bellingham’s skull.

During the reconstruction, it was noticed that the assassin had large eye sockets and needed to have high eyebrows.

They also used the height of the enamel on the skull to gauge the thickness of his lips.

Hew Morrison, forensic expert behind the portrait said: ‘I found the skull to be rather unusual looking, with quite a bulbous cranium and noticeable asymmetry of the chin. 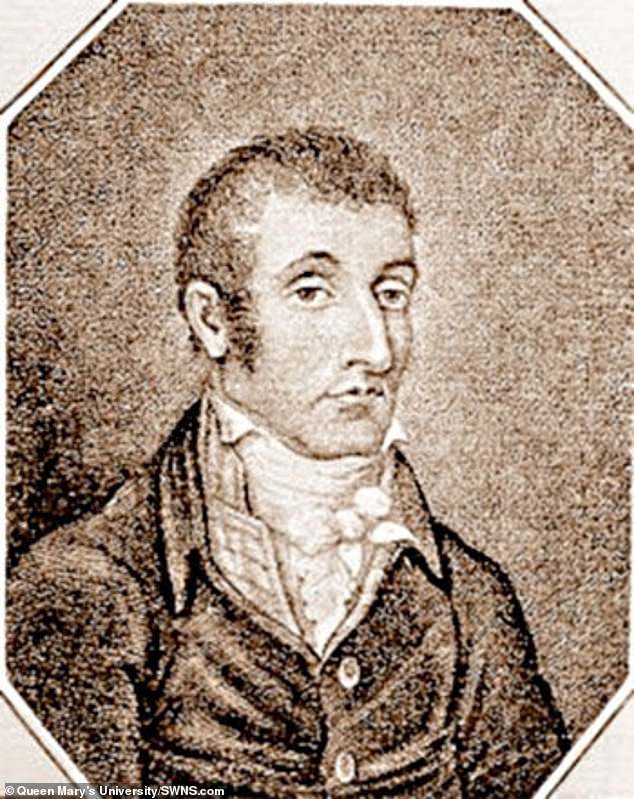 ‘John Bellingham would have had a long, narrow, slightly downturned nose.

‘This was apparent when I saw the skull as the nasal aperture was indeed quite significant in length with a downward nasal spine.

‘I gave him a neutral expression as I treated this like any other facial reconstruction. Despite committing the crime that he was found guilty of and subsequently executed for, I did not feel the need to make him look bad or mean in any way.’

They later added sideburns to the face because of old drawings that showed him with them.

The hair and eye colour were added later as they can’t be determined through a skull.

Bellingham is pictured wearing a Jabot-type necktie and a dark woolen overcoat with his collar turned up, the style that men dressed in at the time.

He is believed to have been 42 when he was hanged.

In 1803, he as jailed in Russia after a business venture broke down and he was stopped while trying to leave the country without paying his debts.

He returned to the UK a year later in 1804 after securing his release and petitioned for the government to compensate him – which they refused to do.

Eight years later, he waited in the lobby of parliament with a gun in a secret pocket in his coat.

When the prime minister appeared he whipped out the gun and shot him in the heart before calmly sitting down on a bench and waiting to be arrested.

He was hanged in public on May 18 that year following a trial at the Old Bailey.

The assassination of Spencer Perceval: The only British Prime Minister to ever be murdered

Prime Minister Spencer Perceval was shot by John Bellingham on May 11 1812, in the lobby of the House of Commons on his way to attend an inquiry into the recent Luddite riots.

It is said his last words were: ‘Oh, I have been murdered.’