Facebook and Google have made tens of thousands of pounds from adverts which make controversial claims about abortion in the run-up to the Irish referendum in two weeks time.

Parents have also raised concerns that YouTube – which is owned by Google – has allowed videos aimed at children to be published with adverts that suggest one in five pregnancies are terminated in England.

The findings come a week after the online giants suspended all advertising connected to Ireland’s abortion referendum as part of moves to protect ‘election integrity’.

On May 25 Irish voters will decide whether to repeal the Eighth Amendment to the Irish constitution which makes abortion illegal.

The campaign to repeal so far has a slight lead but a large group of the electorate have yet to decide which way they will vote.

Ireland bars political donations from abroad, but the law does not apply to social media advertising. US-based anti-abortion groups are among those who have bought online adverts in Ireland during the campaign.

However, the social media organisation has failed to block such ads, reports the Times.

An anti-abortion group based in Leamington Spa paid for an ad about an Irish woman who died after travelling to the UK for an abortion.

Aisha Chithira, 32, died six years ago when being discharged from a Marie Stopes clinic in Ealing following a termination of a 22-week pregnancy.

‘This is not what care for women looks like,’ the advert said. Facebook said it had violated the new rule when contacted for comment and removed the ad. 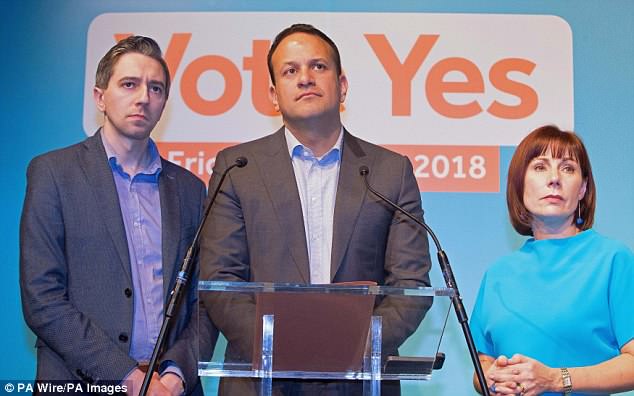 Google’s decision to ban all adverts regarding the referendum was described by one anti-abortion group, Save the 8th, as ‘rigging the election’

A spokeswoman said they reviewed all adverts before they were published but that some got through and were only taken down when users complained.

The controversial adverts were collected in a database created using software which trails through Facebook for information on why advertisers are targeting the user.

The Transparent Referendum Initiative – made up of people checking social media activity concerning the vote – installed the software.

They discovered that the adverts were targeted at women between the ages of 18 and 45 as well as those found to have an interest in online shopping.

Google’s decision to ban all adverts regarding the referendum was described by one anti-abortion group, Save the 8th, as ‘rigging the election’.

The move stopped them from buying their planned adverts during the last two weeks of the campaign.