In the early hours of the morning Australia-time, Facebook international news division chief, the former CNN anchor Campbell Brown, announced: ‘We’ve reluctantly made the decision to restrict the availability of news on Facebook in Australia’

Facebook has been quietly plotting to axe news services for months while paying lip service to Australia’s political leaders.

Just days ago, Treasurer Josh Frydenberg – fresh off the phone with Facebook boss Mark Zuckerberg – sounded super confident the tech giant would soon be cutting deals with publishers, just as Google has.

But behind the scenes, Facebook was secretly plotting to pull the rug on Australia, selecting which sites to dump and how to spin the shock move to its 13 million users in this country.

The digital giant has been threatening to ban all news from Australian users for months, but few publishers thought the tech behemoth would follow through with the ‘nuclear option’.

However on Thursday – despite the so-called constructive talks with Zuckerberg and being ‘close’ to deals with publishers – Facebook hit the button, blindsiding the nation, with Treasurer Josh Frydenberg confirming the government wasn’t told the ‘wrong and unnecessary’ move was coming.

Suddenly the sites of all major news publishers – from Daily Mail Australia to the ABC to News Corp Australia – were banned from sharing Australian journalism in all of its forms, days before sweeping media legislation is expected to pass Parliament.

Official health pages, the Bureau of Meteorology, retailer Harvey Norman and the West Australian opposition leader were collateral damage – finding themselves  banned too from posting to the country’s most popular social media platform. 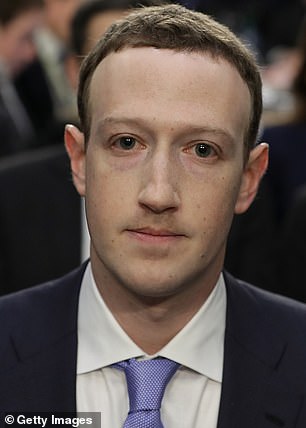 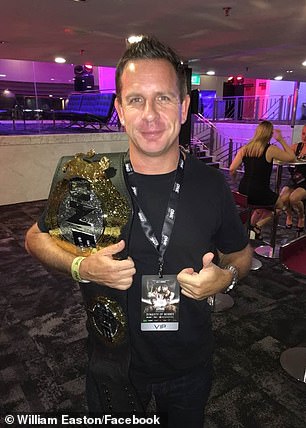 The deciders: The decision to pull the plug on Australian news was made at the highest levels of Facebook but Mark Zuckerberg’s move blindsided the Australian government. On right is his top Australian lieutenant Will Easton

For years, Facebook and Google have hoovered up the lion’s share of digital advertising revenue in Australia, devastating the news industry, even as they distribute stories produced by news organisations for free.

Australia’s world-first laws would compel the tech giants to pay publishers for the news they carry – sparking panic among Silicon Valley executives who feared the laws could create a costly precedent.

That led Facebook to hint as early as last August that it was contemplating drastic action.

Will Easton, Mark Zuckerberg’s top lieutenant for Australia and New Zealand, issued a statement warning Facebook would ban all local and international news from Facebook and Instagram if the draft media bargaining code go ahead.

‘This is not our first choice – it is our last,’ claimed Mr Easton, a former Google and Microsoft staffer. But while Facebook said banning news was the option of last resort, it seems to have always been the one the business was going to choose.

Last October, the tech company went so far as to put it in their fine print. Facebook edited its terms of service to allow the company to ‘remove or restrict access to your content, services or information, if we determine that doing so is reasonably necessary to avoid or mitigate adverse legal or regulatory impacts to Facebook.’

The social media platform renewed its threats at a critical Senate committee hearing into the proposed laws just weeks ago. During the January hearing Facebook executive Simon Milner was forced to deny company was trying to blackmail the Australian government.

‘It’s absolutely not a threat,’ he said, while arguing the laws were ‘unworkable’.

In an extraordinary intervention, even the US Government became involved in the dispute, with the Trump Administration complaining that the laws unfairly targeted two American companies.

Meanwhile, Google waged a higher-profile campaign against the laws. CEO Mel Silva wrote a letter to the search engine’s users, warning the laws would ‘put our free services at risk.’

The company placed a warning with an ominous yellow exclamation mark on their home page. It released video ads, comparing the bargaining code to a friend being forced to pay for recommending a cafe to another person.

Silva even appeared at a Senate committee hearing, one day before giving birth, to warn Google could pull out of the country. 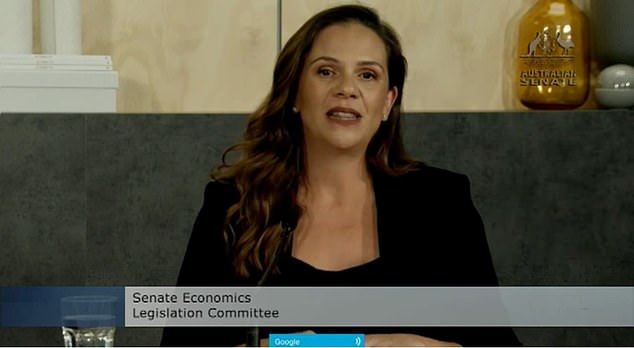 Google CEO Mel Silva appeared in front of the Senate committee while heavily pregnant last month. But the Senators forged ahead with their plans and eventually signed off on the proposed laws 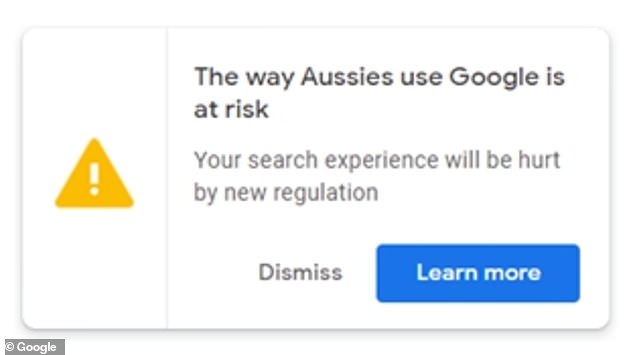 Last year, Google users were confronted with an alarming yellow exclamation mark with a link to a so-called ‘open letter to Australians’ from the company’s managing director in Australia Mel Silva 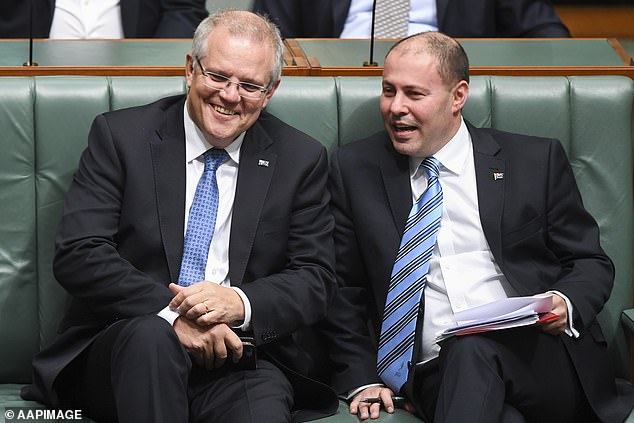 Ms Silva comments fell on deaf ears with the committee last week publishing a report approving the passage of the laws. ‘We don’t respond to threats,’ Prime Minister Scott Morrison said at the time.

And Google seemed to change its tune this week – signing major deals with media companies including Nine Entertainment, News Corp Australia and smaller publications such as Junkee.

Facebook has apparently chosen to go down a different path, with the head of its news division, former CNN anchor Campbell Brown, warning the company will now ‘prioritize investments to other countries’, rather than Australia.

‘We’ve reluctantly made the decision to restrict the availability of news on Facebook in Australia,’ Brown said.

Even some of Facebook’s local staff may have been caught be surprise. The Australian Financial Review reported that it was told last night that Facebook was awaiting the parliamentary debate on the laws before continuing negotiations with publishers. 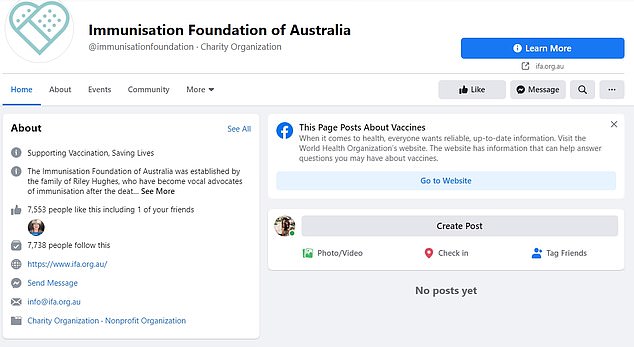 Gone: The Immunisation Foundation of Australia was one of several Facebook pages wiped out by the tech giant on Thursday 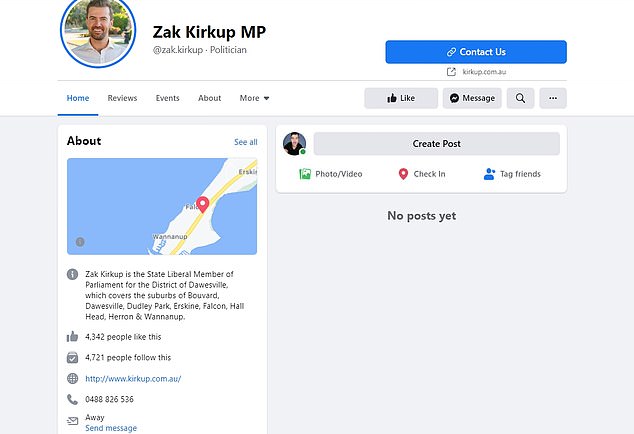 Amid a nationwide uproar, Treasurer Josh Frydenberg said today that he had a ‘constructive’ half hour call with Zuckerberg this morning.

He had been talking to Zuckerberg over the weekend but was blindsided by the ‘unnecessary and wrong’ sudden move.

‘We certainly weren’t given any notice by Facebook,’ the senior minister said, announcing the government was still committed to passing the media code into law.

Mr Frydenberg said Facebook had been having ‘pretty constructive’ discussions with local news businesses until this point.

‘Deals were relatively close,’ he said, expressing an interest in continuing to ‘work through’ Facebook’s issues.

Communications Minister Paul Fletcher suggested what has happened could be a no holds barred negotiating tactic.

‘The code is not yet in the law, so it raises an obvious question, why are they doing this now?’ Mr Fletcher said.

The showdown continues, but no one knows what happens next. The only thing that’s certain is you won’t be reading about it on Facebook.