The social media giant debuted the $200 video-calling device in October to mixed reception.

It raised a red flag when, seemingly out of nowhere, a flurry of five-star reviews appeared for the Portal on Amazon, with many of the reviewers names matching up with current Facebook staffers.

Facebook staffers were caught red-handed leaving glowing reviews for the firm’s Portal device on Amazon. The reviews caught the attention of Facebook execs and were later removed

Portal and Portal+ are equipped with Amazon’s Alexa, so they respond to voice commands.

Here’s what they can do:

New York Times reporter Kevin Roose first spotted the reviews and questioned why they just so happened ‘to have the same names as Facebook employees.’

‘Reviewing your employer’s products is definitely against Amazon’s rules,’ Roose wrote in a tweet.

‘It’s also not exactly an indicator of confidence in how well they’re selling organically.’

Among the staffers believed to have posted the reviews were Javier Cubria, an event marketer at Facebook, Tim Chappell, head of supply chain and strategic sourcing for Facebook’s AR and VR products, as well as Oren Hafif, a security engineer at Facebook.

According to the Portal listing on Amazon, the device has received 160 customer reviews so far.

The tweets generated so much attention that they caught the eye of Andrew ‘Boz’ Bosworth, Facebook’s vice president of augmented reality and virtual reality.

Bosworth essentially confirmed that the reviews came from Facebook employees.

‘Neither coordinated nor directed from the company,’ Bosworth wrote in a tweet.

‘From an internal post at the launch: ‘We, unequivocally, DO NOT want Facebook employees to engage in leaving reviews for the products that we sell to Amazon” 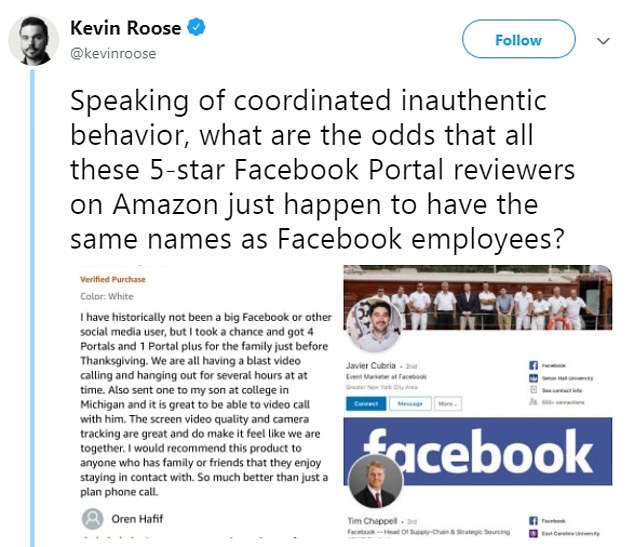 ‘We will ask them to take down,’ Bosworth added.

Amazon’s rules prohibit people from ‘creating, modifying, or posting content regarding your (or your relative’s, close friend’s, business associate’s, or employer’s) product or services.’

All of the reviews left by Facebook employees on the Portal rated it five stars and described the product with glowing words.

Hafif’s review said the ‘camera tracking is AMAZING,’ adding that the speakers are ‘pretty impressive for such a tiny device.’

His only minor criticism was that the ‘software is up and coming.’

Hilariously, a user named ‘Jeri’ replied to his review saying: ‘Oren don’t you work for Facebook?’

Oren Hafif, a security engineer at Facebook, was one of the staffers who left a review. Hilariously, a user replied to his post saying: ‘Oren don’t you work for Facebook?’

Tim Chappell, head of supply chain and strategic sourcing for Facebook’s AR and VR products, left a review saying he’s ‘historically not been a big Facebook or other social media user’

Another review by Chappell was even more mind-boggling given how he glaringly tried to deceive users into thinking he doesn’t have ties to Facebook.

‘I have historically not been a big Facebook or other social media user, but I took a chance and got 4 Portals and 1 Portal plus for the family just before Thanksgiving,’ Chappell said.

‘…I would recommend this product to anyone who has family or friends that they enjoy staying in contact with.

‘So much better than juts a plan [sic] phone call,’ he added.

Even if the staffers weren’t working together to leave positive reviews on the Portal, speculation naturally mounted against the employees for shadily leaving reviews on a product manufactured by the company they work for. 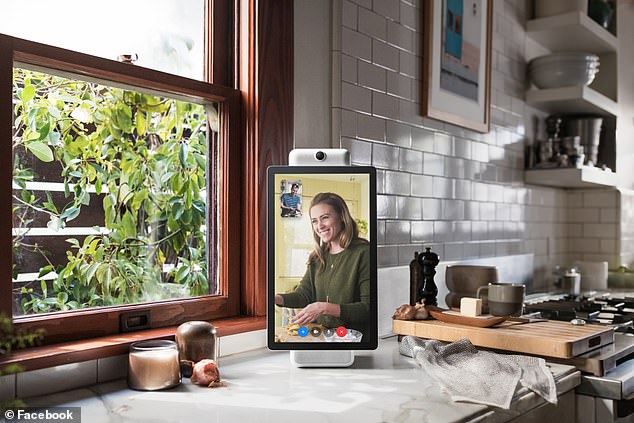 Portal uses several features from Facebook Messenger, such as augmented reality Masks like bunny ears or a cat on your head, which can be overlaid onto a user’s face during a video call

Additionally, many questioned the need for a Facebook-made video-calling device when it was first released last year.

The Portal was launched just weeks after Facebook announced its worst-ever data breach in late September, leading many to wonder why they’d want to bring a camera-equipped device into their homes when Facebook has become known for its lax treatment of users’ personal data.