A senior Facebook executive will be grilled by politicians from eight countries today as an ‘unprecedented’ international grand committee probes a data scandal.

Richard Allan faces interrogation about how Facebook users’ information ended up in the hands of Cambridge Analytica, a UK firm accused of using data mining to influence both the Brexit referendum and election of Donald Trump.

Today’s hearing comes after British MP Damian Collins used his parliamentary powers to seize a cache of secret documents from a company linked to the scandal.

The committee chairman sent a House of Commons Serjeant at Arms to personally demand documents from the founder of a company called Six4Three, a controversial app that allowed people to find pictures of friends in bikinis.

The papers – said to include confidential emails between senior executives, and correspondence with Zuckerberg – are under orders to be kept secret by a US court but could be published by Mr Collins in parliament.

Mr Collins seized the documents believing they could prove Facebook – and possibly Mr Zuckerberg itself – knew about what Cambridge Analytica was doing with user data.

The inquiry was set up to investigate fake news on Facebook after the 2016 EU referendum but the probe widened following revelations about Cambridge Analytica and claims Russia used the social network to spread disinformation and sow chaos.

Where do the papers come from?

The documents seized by Collins and his committee stem from a court case being heard in California between app developer Six4Three and Facebook.

Ted Kramer, who owns the developer, launched a suit against Facebook after the tech company restricted to data that one of his apps – Pinkini – could access.

The app was designed to identify bikini photos among albums posted by friends on Facebook, and the restrictions effectively killed it.

As part of the lawsuit, Kramer accuses Facebook of encouraging developers to build apps based around access to data that it then withdrew.

He also alleges that Zuckerberg sold expensive ads to developers in return for long-term access to the data.

This form of access was later exploited by Cambridge Analytica in an attempt to affect elections.

As part of his case, Kramer got his hands on documents – said to include confidential emails between senior executives, and correspondence with Zuckerberg – apparently showing they knew about issues around the privacy of user data.

Facebook fought for months to keep the documents secret, and was ultimately vindicated when a California judge ruled in its favor.

But now Collins is threatening to publish the documents because he is outside of US jurisdiction and protected in his role as a minister heading up an investigation.

Facebook founder Mark Zuckerberg has refused to take part in today’s hearing in the House of Commons, declining invites to appear either in person or by video link.

In Mr Zuckerberg’s absence Mr Allan, Facebook’s vice-president of policy solutions, will be questioned by the international committee today.

As well as British MPs, politicians from Argentina, Brazil, Canada, France Ireland, Latvia and Singapore will take part in the hearing from 11.30am.

Speculation is high that the committee will use parliamentary privilege to publish the secret internal Facebook emails at the hearing today.

Facebook has demanded the Six4Three papers are handed back without being opened by MPs or published.

Six4Three are the makers of the controversial app Pinkini, and is suing Facebook for restricting the app’s access to users’ data.

As part of its case, Six4Three’s lawyers  were handed internal Facebook documents – including executives’ email correspondence with Zuckerberg – but they were ‘sealed’ by a court in California, meaning they are kept secret.

It believed the documents show how the firm created and effectively drew attention to a privacy loophole later used by Cambridge Analytica to collect the data of millions of users.

Six4Three managing director Ted Kramer gave the documents to British authorities after being warned he could be banned from leaving the UK if he refused.

In an extraordinary sequence of events, he ignored three demands for the emails before being personally served by a Serjeant at Arms and meeting Mr Collins in his Commons office.

MPs drew up the ‘unprecedented’ order to seize the documents after discovering that Mr Kramer was due to visit the UK.

Kramer has claimed in court documents he ‘panicked’ while in the meeting with Mr Collins and his staff, meaning he copied documents from his cloud storage and onto a USB stick.

For its part, Facebook has demanded that the seized documents are not published and returned to them .

But after seizing the documents, Mr Collins said: ‘Under UK law and parliamentary privilege we can publish papers if we choose to.

‘As you know we have asked many questions of Facebook about its policies on sharing user data.

‘I believe these documents may contain important information.’

He said Facebook had some ‘very serious questions’ to answer and accused it of misleading the committee over Russian involvement on the platform.

‘It has not answered our questions about who knew what, when with regards to the Cambridge Analytica scandal,’ Mr Collins said.

‘We have followed this court case in America and we believed these documents contained answers to some of the questions we have been seeking about the use of data, especially by external developers.’

An app called ThisIsYourDigitalLife harvested the data of millions of Facebook users, largely without their knowledge, then sold it on to now-defunct political consulting firm Cambridge Analytica.

The firm then used the data to target political advertising at users during both the US elections in 2016 and the Brexit referendum when it worked on behalf of Donald Trump’s campaign and Leave.EU. 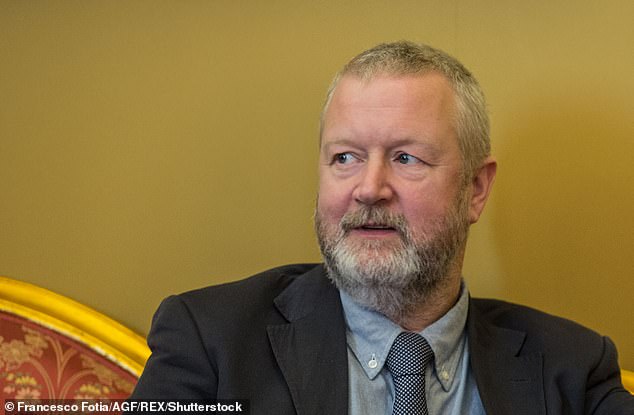 Instead of Mr Zuckerberg, Facebook executive Richard Allan faces interrogation about how Facebook users’ information ended up in the hands of Cambridge Analytica, a UK firm accused of using data mining to influence both the Brexit referendum and election of Donald Trump

Politicians around the world are separately investigating Facebook and its role in fake news. Many have demanded evidence from Mark Zuckerberg personally – but have been rebuffed as he only agreed to speak to the US Senate and European Parliament.

Britain’s Digital, Culture, Media and Sport Committee chaired by Damian Collins MP set up an international hearing to try and persuade the Facebook founder to come.

He refused again but committee will meet today anyway.

The documents were seized after Zuckerberg was forced to defend his job over revelations that Facebook knew about Russian election interference despite denying it and used lobby firms to smear critics.

It was revealed last week that Facebook deliberately misled the public about what it knew about the Kremlin’s 2016 election tampering.

The tech giant also employed a ‘research firm’ to smear protesters by linking them to George Soros and a lobby firm to brand critics anti-Semites.

When asked today if would consider stepping down as chairman Zuckerberg told CNN Business ‘That’s not the plan.’

He was critical of the use of lobby and research firms to attack opponents.

‘I wasn’t particularly happy about that piece of it. And that’s certainly a lot of what made me want to look into this more deeply,’ he said.

‘The intention was never to attack an individual but there are lobbying groups out there who are out to attack, it’s fine to push back on them.’

He criticized the decision to link critics to George Soros.

‘George Soros has been the target of a lot of really horrendous attacks and I think that that is terrible and I certainly wouldn’t want anyone who is associated with our company to be a part of that,’ he said.

‘A lot of the critique that folks have had about our company, I read and I think a lot of it is fair and we need to do better and learn from but at the same time I don’t think all of it is fair.’

Facebook’s share price has been tanking since it became embroiled in the data scandal, and took a particularly sharp nose-dive in recent weeks.

The social network is down almost 20 per cent in this quarter compared to last, with shares selling at $134.82 last week.

Lord Allan has also urged Mr Collins not to reveal the documents. He warned Collins yesterday in an email that the documents are ‘sub judice before a court in California’ and are ‘sealed’.

Lord Allan is a Liberal Democrat peer and unlike previous Facebook witnesses at the House of Commons is an expert in Parliament’s procedures.

He spent eight years as MP for Sheffield Hallam and was succeeded by Nick Clegg, who has since been hired by Facebook since he lost the seat last year.

The secret documents were taken from Mr Kramer, whose Six4Three firm is currently fighting its own lawsuit with Facebook.

A US judge in California had ordered the files, obtained from Facebook via a legal discovery process, could not be revealed to the public earlier this year.

However, MPs from the culture committee, headed by MP Damian Collins, drew up an ‘unprecedented’ order after discovering that Mr Kramer was due to visit the UK.

Mr Zuckerberg has repeatedly refused to attend the UK Parliament saying that he has already testified to Congress in the US and before the European Union.

‘It is not possible for Mr Zuckerberg to be available to all parliaments,’ the firm said.

Mr Collins has repeatedly hit out over the snub, describing the response as ‘not good enough’.

Facebook said after the documents were seized: ‘The materials obtained by the DCMS committee are subject to a protective order of the San Mateo Superior Court restricting their disclosure.

‘We have asked the DCMS committee to refrain from reviewing them and to return them to counsel or to Facebook.

What is the Cambridge Analytica scandal?

In 2013, Cambridge professor Aleksandr Kogan used his app, This Is Your Digital Life, to ask 270,000 Facebook users questions about their personalities.

By answering them, the users granted Kogan access to not only their profiles but to those of their friends.

He subsequently sold that information to Cambridge Analytica for $51million.

A year later, the company learned that Kogan had sold his findings and contacted both him and Cambridge Analytica to tell them to delete the data which they promised to do.

In March, Facebook made its announcement that it had suspended Cambridge Analytica after being warned of looming media reports that claimed not all of the information had been destroyed.

Those reports, which were informed by the accounts of whistleblowers who worked at the firm, also revealed the true scale of the breach.

It was initially estimated that the firm was able to mine the information of 55 million Facebook users even though just 270,000 people gave them permission to do so.

But Facebook later since revealed the number was actually as high as 87 million.

The same information is said to have been used to help the Brexit campaign in the UK.