When you share a home with other people, there are bound to be a few arguments over cleaning and washing up, but one messy roommate has taken things to new levels of laziness.

And angry Facebook user, from Colorado, shared snaps of their roommates filthy bedroom with the group Awful roomates: roomates from hell, which racked up 120 comments from people couldn’t believe the state of the room.

‘So the sink isn’t as bad but my roommate is refusing to clean, he hasn’t done dishes all but two times in the time he has been here,’ the poster wrote on Facebook.

‘I have told him multiple times to clean up his f****** dishes which are everywhere! And his room which smells like old c**, lube, a** and spoiled food, they added.

‘He says he has a therapy appointment in five hours so he can’t clean today but I’ve been at work all f****** week trying not to have a breakdown when I come home,’ the post concluded.

The picture captured several dirty dishes left unwashed in the kitchen, as well as a dirty sink filled with bowls, Tupperware and discarded potato chips.

But it was the bedroom that infuriated people the most, with the floor covered in various sorts of trash, from dirty, crumpled clothes to unwashed plates, half empty mugs, takeout wrappings and cardboard boxes.

‘This is just not even trying,’ a member of the group wrote. 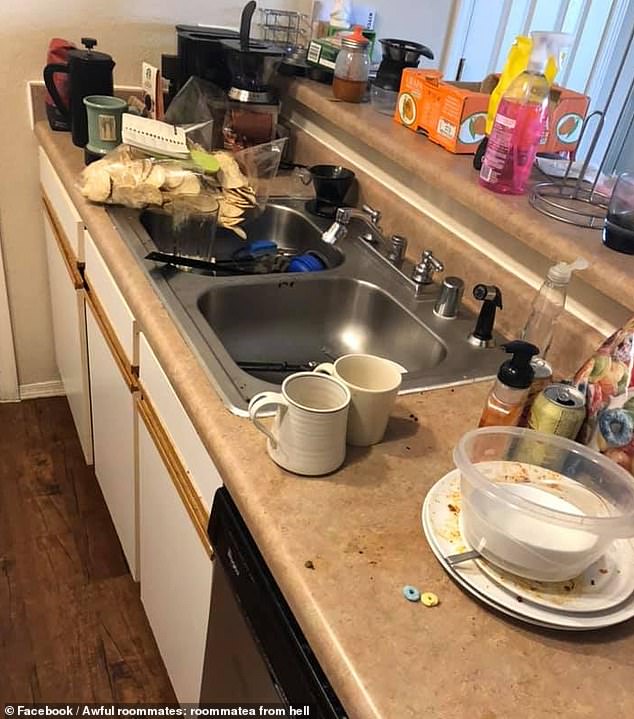 The person explained their housemate’s mess extended to communal areas such as the kitchen (pictured), which he left covered in dirty dishes, and discarded potato chips

The housemate refused to clean and would find excuses not to do so (pictured), such as appointments taking place 5 hours later

‘Nooooooope. I’m obsessed with having a clean house and I would not be able to handle this level of filth, at all. Holy s*** that’s gross.’

‘Literally what the f*** is that bedrooom,’ asked another.

‘Holy s*** I would LOSE it. This is disgusting. I’d scream and scream until they cleaned it or ran away,’ wrote another.

‘Jesus. You’re going to have to start asking for references from past roomates and proof they lived in the same address now. People can be disgusting,’ one commented.

Have you considered nuking your roommate? Might be your only option,’ joked another.

‘Okay I thought I was messy but this wins,’ said another.

Other said the mess in the room was fine, but that extending to common areas was off limit.

‘If he kept it contained to his nasty a** room then fine but he canot expect you to be cool with all this clutter in the common area. If he doesn’t wanna do dishes he can order out or invest in paper plates for himself.

Some people suggested the man was depressed as an explanation for the mess, which led to a debate of mental health.

‘That is depression,’ one wrote.

The pictures sparked a debate about mental health on the page, with people arguing that people with depression could also clean their rooms

‘Not everyone with a nasty room is depressed. Some people are just gross. You also cannot tell someone is depressed only by looking at their room. I have chronic depression and anxiety and my room is cluttered but not disgusting. I can smell the room though my phone,’ argued another.

The original posted rejected the argument and said the messiness was not part of the housemate’s depression.

‘It’s not their depression, they go to therapy with regards to other things, afraid they just do this because they don’t want to clean,’ they said.

‘And they just like it that way and don’t care but me and my other roommate, who share a room, can’t really have anybody over due to the smell,’ they concluded. 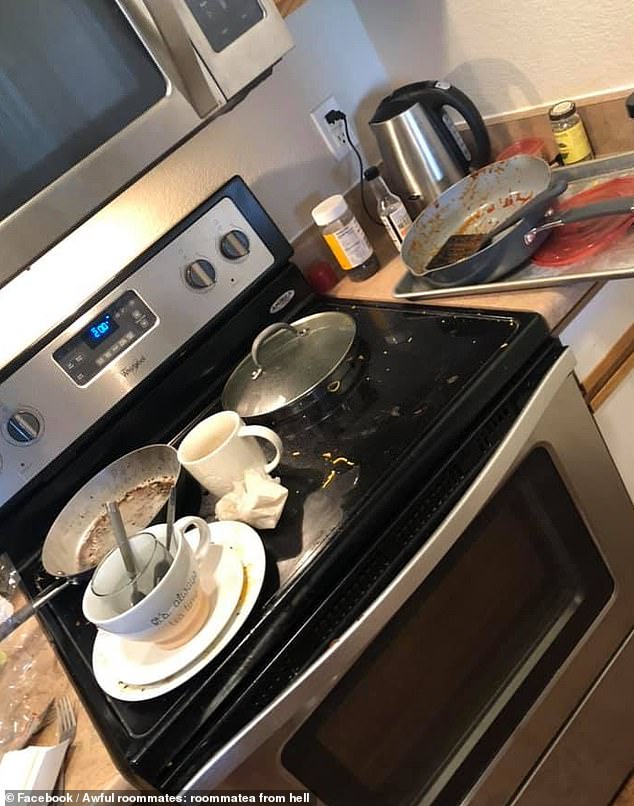 The housemate refuses to do his dishes, and will leave dirty pans, plates and bowls everywhere in the kitchen