Facebook is DOWN: Site unavailable for users around the globe

Facebook is DOWN: Site unavailable for users around the globe

Facebook users around the world have been left in a ‘total blackout’ after the site crashed early Monday afternoon.

The site went down just before 1 p.m. (ET), affecting users from the United States and South America all the way to Europe.

Those who attempt to access the desktop site are met with a message saying ‘Sorry, something went wrong,’ while mobile users appear unable to refresh the News Feed.

Facebook is down for users around the world, with many unable to log into the site or refresh their News Feed

‘We’re working on it and we’ll get it fixed as soon as we can,’ Facebook said.

Hundreds of reports piled within minutes of the crash, with most (55 percent) saying they were experiencing a ‘total blackout,’ according to DownDetector.

Others have said they are unable to log in (35 percent), while a smaller group (14 percent) is having issues with images. 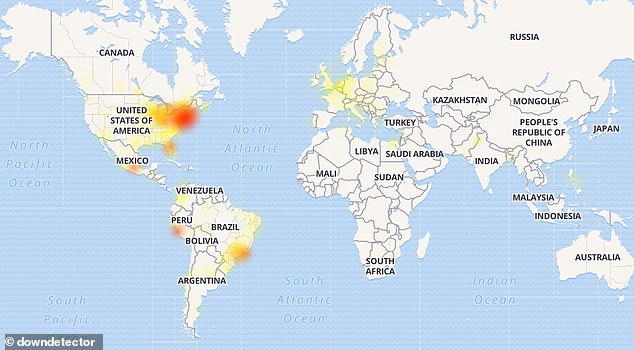 The site went down just before 1 p.m. (ET), affecting users from the United States and South America all the way to Europe

New York users seem to be among the hardest hit by the Facebook blackout, along with much of the eastern US.

The issues have also popped up across South America, with the Sao Paulo area of Brazil worst affected.

Some users in the UK have reported problems with the site today as well, though countries in the Eastern Hemisphere largely appear to have dodged the worst of it.