Much of the focus on Russian involvement has come as part of a larger story that suggests Moscow instead sought to help Trump win the White House over Hillary Clinton.

But Facebook General Counsel Colin Stretch said in a Senate Judiciary Committee hearing that while his company first spotted the ads in the presidential primary season two years ago, they continued to run ‘following the election.’

‘We saw this concerted effort to sow division and discord,’ Stretch explained. ‘In the wake of the election – and now-President Trump’s election – we saw a lot of activity targeted at fomenting discord about the validity of his election.’

The ads ‘continued until we disabled the accounts,’ he said.

Colin Stretch, general counsel for Facebook (left) testified in a Senate hearing on Tuesday that ads placed by a Russian propaganda arm continued after President Trump won the White House, and were ‘targeted at fomenting discord about the validity of his election’ 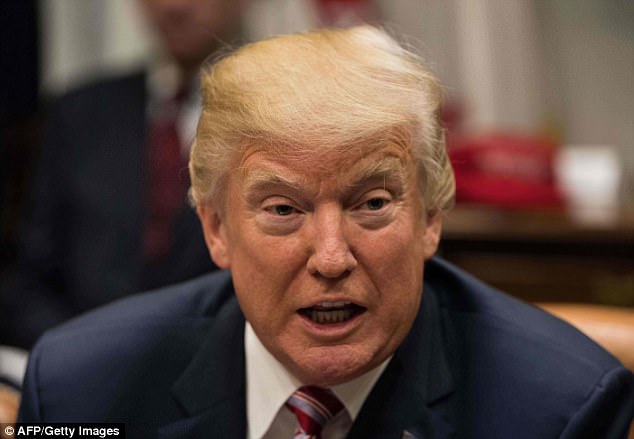 The revelation that much of Facebook’s Russia-influenced ad content aimed to undermine, not support, Trump runs against the grain of a prevailing narrative about Moscow trying to endure his victory over Hillary Clinton

‘On the advertising side, what was interesting was we saw the activity drop off after the election. But these automated accounts continued.’

Senators, however, showed off mostly those ads that reflected well on Trump or seemed calculated to cause Hillary Clinton harm.

He also showed a Facebook ad that advertised a Pennsylvania ‘Miners for Trump’ event that never took place.

Facebook, Twitter and Google all defended their security measures in the Senate hearing following revelations that Russian-linked accounts reached many more American voters than previously thought.

Testimony from Facebook reveals that posts generated by a Russian outfit may have reached as many as 126 million users. Pages created by Russia’s Internet Research Agency generated 80,000 posts on 120 pages between January 2015 and August 2017.

Possible views reached into the millions after people ‘liked’ the posts and shared them.

Stretch told the committee that ‘we take what happened on Facebook very seriously; the foreign interference we saw is reprehensible.’ 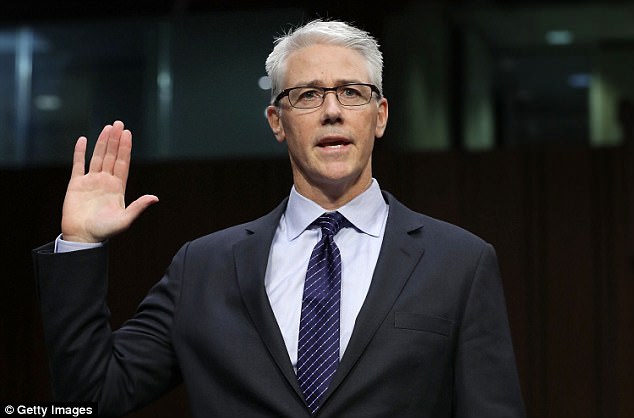 Facebook says a Russian internet agency posted more than 80,000 pieces of content during and after the 2016 election, and that content was distributed to an estimated 126 million users 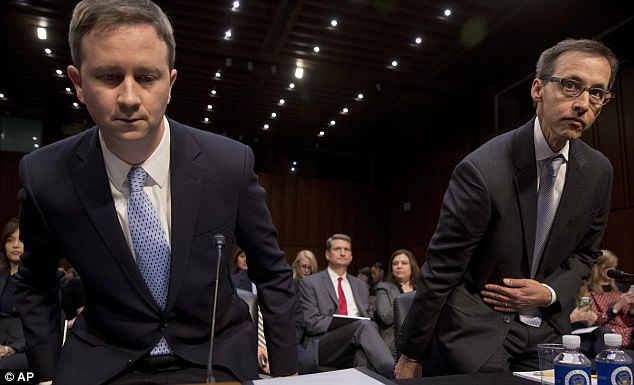 ‘That foreign actors hiding behind fake accounts abused our platform and other Internet services to try to sow division and discord – and to try to undermine our election process – is an assault on democracy, and it violates all of our values,’ Stretch said.

The three companies are testifying at different three hearings Tuesday and Wednesday as part of congressional probes of Russian election interference.

The White House said Tuesday that it’s reserving judgment before weighing in on proposed disclosure requirements for large tech companies that sometimes operate more like public utilities than private corporations.

‘I think we need to see how this process works out over the next several days,’ White House press secretary Sarah Sanders told reporters, adding: ‘That’s not something that the federal government can weight in at this point until the finding of this investigation and the hearings are completed.’

Stretch’s testimony makes clear that many of Facebook’s targeted users may never have seen the suspect material. The company says the total number represents around 1 out of 23,000 pieces of content on the site.

These ‘organic’ posts that appeared in Facebook users’ news feeds are distinct from more than 3,000 advertisements linked to the agency that Facebook has already turned over to congressional committees.

The ads, many of which focused on divisive social issues, pointed people to the agency’s pages, where they could then like or share its material.

Twitter told the same subcommittee that it has uncovered and shut down 2,752 accounts linked to the same group, Russia’s Internet Research Agency, which is known for promoting pro-Russian government positions.

That number is nearly 14 times larger than the number of accounts Twitter handed over to congressional committees three weeks ago.

‘Twitter believes that any activity of that kind – regardless of magnitude – is intolerable, and we agree that we must do better to prevent it,’ said Edgett.

And Google announced in a blog post that it found evidence of ‘limited’ misuse of its services by the Russian group, as well as some YouTube channels that were likely backed by Russian agents. 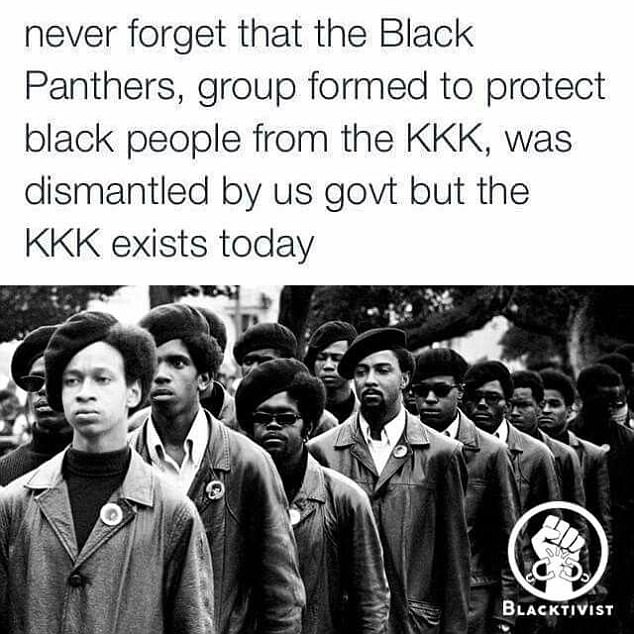 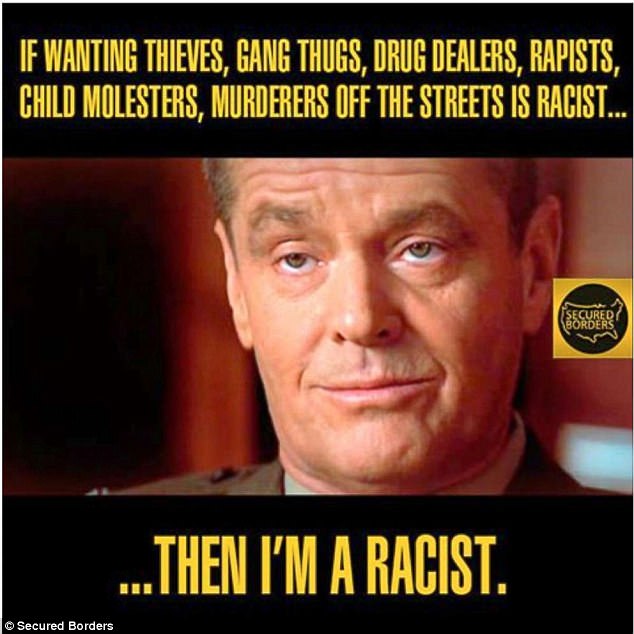 Separately, a fake group called ‘Secure Borders’ appeared to be supporting Trump but was really a page operated by the Russians

Lawmakers have pressured the social media companies to come forward and have criticized them for not being fully forthcoming immediately after the election.

All three firms are expected to face questions about what evidence of Russian interference they found on their services, as well as why they didn’t find it earlier. Lawmakers are also expected to probe whether the firms know of any connections between the Russian posts and the Trump campaign.

South Carolina Sen. Lindsey Graham, the Republican chairman of the Judiciary subcommittee holding the hearing, said in a statement that manipulation of social media by terrorist organizations and foreign governments is ‘one of the greatest challenges to American democracy’ and he wants to make sure the companies are doing everything possible to combat it.

‘Clearly, to date, their efforts have been unsuccessful,’ Graham said.

On Twitter, the Russia-linked accounts put out 1.4 million election-related tweets from September through Nov. 15 last year – nearly half of them automated. The company also found nine Russian accounts that bought ads, most of which came from the state-backed news service Russia Today, or RT.

Twitter said last week it would no longer accept ads from RT and Sputnik, another state-sponsored news outlet. It will donate the $1.9 million it has earned from RT since 2011 to support external research into political uses of Twitter.

Google said that two accounts linked to the Russian group spent $4,700 on ads its platforms during the 2016 election. The company also found 18 YouTube channels likely backed by Russian agents.

The companies will almost certainly do what they can to convince lawmakers that they can fix the problem on their own, without the need for regulation.

A bill unveiled earlier this month would require social media companies to keep public files of election ads and require companies to ‘make reasonable efforts’ to make sure that foreign individuals or entities are not purchasing political advertisements in order to influence Americans.

The companies haven’t commented on the proposed legislation, but say they’re at work on the problem. Last week Facebook said it will verify political ad buyers in federal elections and build transparency tools to link ads to the Facebook pages of their sponsors. Twitter has also said it will require election-related ads for candidates to disclose who is paying for them and how they are targeted.

Google announced on Monday that it will also verify the identity of election-related ad buyers and identify these advertisers publicly via an ad icon. It will provide a public database of election ads detailing who purchased each one, and will publish a transparency report on election ads as well.