Zuckerberg in Washington DC on Thursday

Facebook has referred to itself as a publisher which has the right to ban anyone it wants to in court documents in a sudden U-turn on its long-held claim that it is not a media company but an impartial technology platform.

The language was included in a motion filed this week in court and comes a year after Mark Zuckerberg told congress that he thought of his company as a ‘tech company’ instead of a member of the media.

The revelation triggered accusations that the company is trying to have it ‘both ways’.

Critics say it cannot tell lawmakers it is impartial while also trying to worm its way out of a lawsuit by defending its actions as ‘editorial decisions’ driven solely by their own opinions.

It comes amid growing concern that the company has too much power. On Thursday, Zuckerberg was told by lawmakers to sell Instagram and WhatsApp.

Facebook is being sued for defamation by Laura Loomer, a right-wing activist who has been banned from Twitter, Instagram, LinkedIn and a host of other websites for her extreme opinions.

She sued Facebook, claiming it defamed her by publicly declaring that she had violated its Dangerous Individuals and Organizations policy by calling Ilhan Omar ‘anti-Jewish’ and associating with white supremacists. 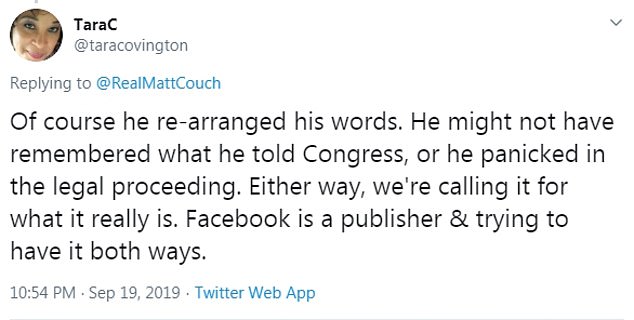 Facebook’s entire defense against her is that it was its opinion that she deserved to be banned and wasn’t a fact.

‘Under well-established law, neither Facebook nor any other publisher can be liable for failing to publish someone else’s message. The First Amendment provides absolute protection for such decisions,’ the filing states. 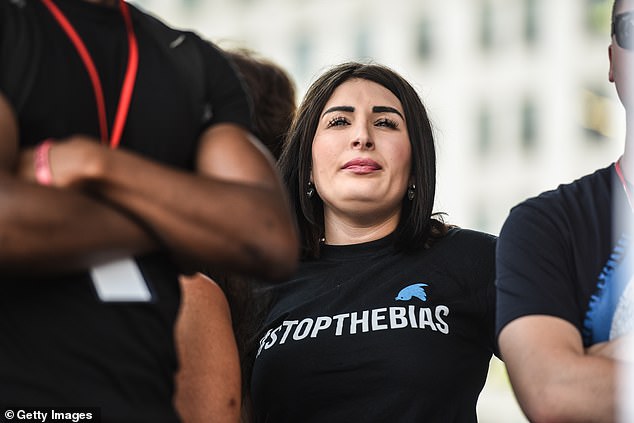 Right-wing activist Laura Loomer, who has been banned by a string of websites for her extreme conservative views, is suing Facebook for defamation

Under that logic, the company can ban anyone who it deems has violated the policy.

The filing led to questions of whether or not Facebook had opened itself up to lawsuits by categorizing itself as a publisher.

Some excitedly rushed to the idea that it could now be sued for what any of its users posted online.

In their motion, Facebook’s lawyers however say they are still protected  by Section 320 of the Communications Act.

Zuckerberg was in Washington DC on Thursday to face calls from lawmakers to break up his company because it has too much power.

They told him to sell off Instagram and WhatsApp and that it had been caught admitting to having a political biased.

He has resisted outside intervention and vowed instead to build his own anti-trust and oversight committees.

In April last year, Zuckerberg testified before congress as public trust in the company plummeted amid the data privacy Cambridge Analytica scandal.

He said: ‘I consider us to be a technology company because the primary thing that we do is have engineers who write code and build product and services for other people.

‘We do pay to help produce content. We build enterprise software. We build planes to help connect people, but I don’t consider ourselves to be an aerospace company.

‘When people ask if we’re a media company what I heard is, “Do we have a responsibility for the content that people share on Facebook,” and I believe the answer to that question is yes,’ he said.