Facebook has reported huge revenue increases since last year despite an onslaught of controversies and concerns over how it makes its money.

The social network’s advertising revenue for Q1 soared 50 per cent from last year to $11.795billion, surpassing Wall Street’s expectations and quieting worries that recent scandals may have scared off business.

Earnings per share increased by more than 60 per cent on last year’s Q1 to $1.69 and the site’s average daily user intake was up to 1.45billion, an increase of 13 per cent.

Promising as the figures may be, the recent Cambridge Analytica scandal – which tanked Facebook’s stock by almost 14 per cent in ten days – may not be represented in the findings.

On Thursday morning, Facebook opened at $173 a share on the NASDAQ, an increase 8.82 per cent on Wednesday’s closing price.

Facebook’s Q1 advertising revenue jumped 50 per cent since last year to $11.795billion. It did not reach the $12,779billion seen in the last quarter 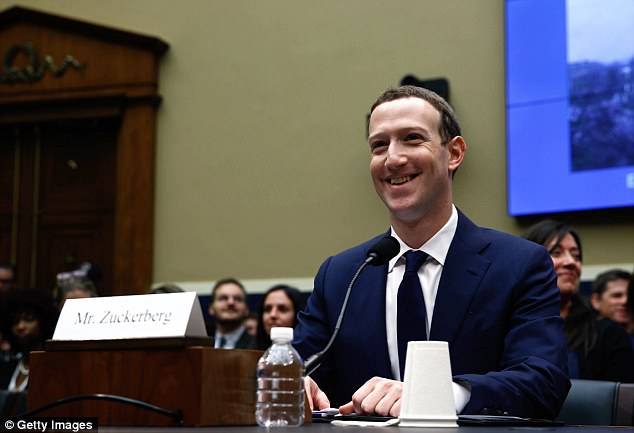 CEO Mark Zuckerberg heralded the results as a ‘strong start’ to the year. He is pictured on April 11 testifying on Capitol Hill in light of the Cambridge Analytica scandal which raised grave concerns over user privacy. The scandal erupted at the end of March but the full weight of it was not taken into account in this quarter’s earnings report 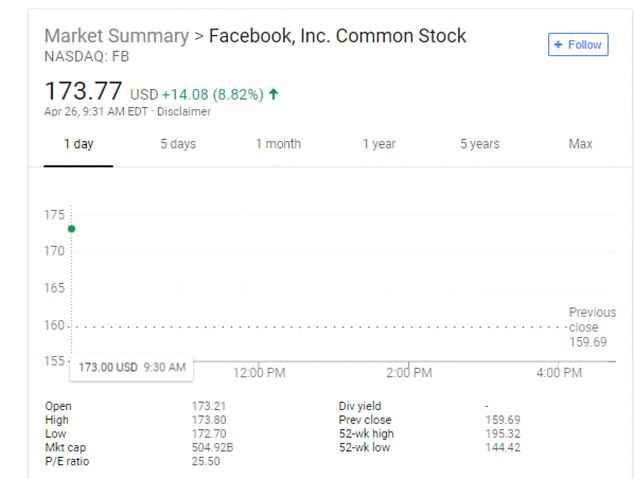 On Thursday, shares opened at $173, an increase of 8.82 per cent on Wednesday’s close

It is still the highest-spending region, accounting for $5.595billion of the $11.795billion raised this quarter.

Despite facing important challenges, our community and business are off to a strong start in 2018

Interestingly, it increased in Asia Pacific and the rest of the world including Russia which used it as a vehicle for pro-Putin and Trump material in 2016 and beforehand and continues to utilize troll accounts.

They also do not take into account Mark Zuckerberg’s appearance on Capitol Hill on April 10 when he defended the company he built from his Harvard dorm room against accusations of gross breaches of its users’ privacy.

Zuckerberg cautiously celebrated the figures, saying in statement released with the report: ‘Despite facing important challenges, our community and business are off to a strong start in 2018.

‘We are taking a broader view of our responsibility and investing to make sure our services are used for good.

‘But we also need to keep building new tools to help people connect, strengthen our communities, and bring the world closer together.’

In a longer post on his own Facebook page, he said the company’s ‘focus’ for the coming year was to ‘keep people safe’. 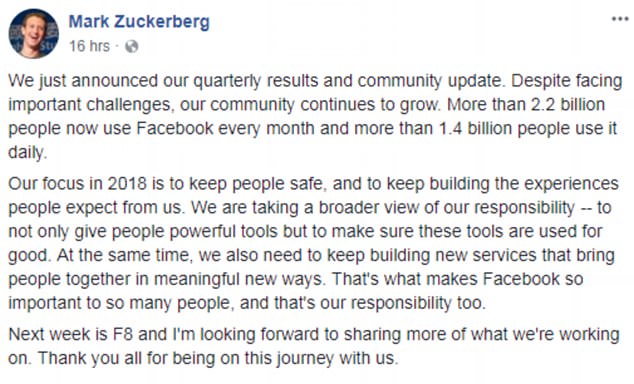 Zuckerberg celebrated the earnings cautiously. He said his priority for the year remained to ‘keep people safe’ 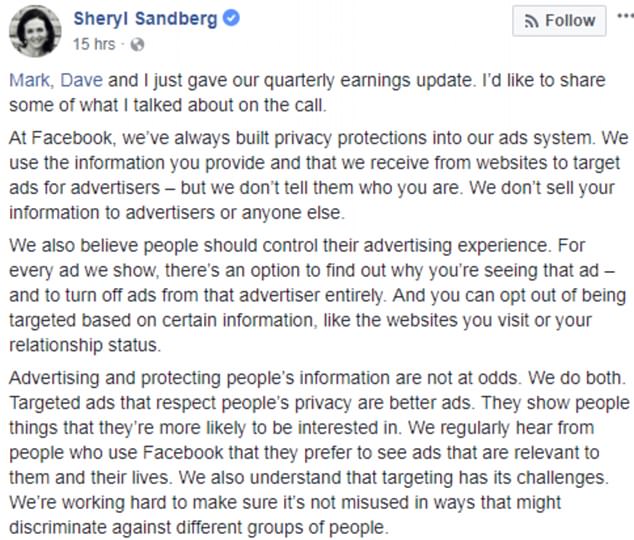 ‘At the same time, we also need to keep building new services that bring people together in meaningful new ways.

‘That’s what makes Facebook so important to so many people, and that’s our responsibility too,’ he said.

In her post, she defended the company’s ad practices and insisted that no users’ private information was ever sold to clients.

‘Advertising and protecting people’s information are not at odds. We do both. Targeted ads that respect people’s privacy are better ads.

‘They show people things that they’re more likely to be interested in.

‘We regularly hear from people who use Facebook that they prefer to see ads that are relevant to them and their lives.

‘We also understand that targeting has its challenges. 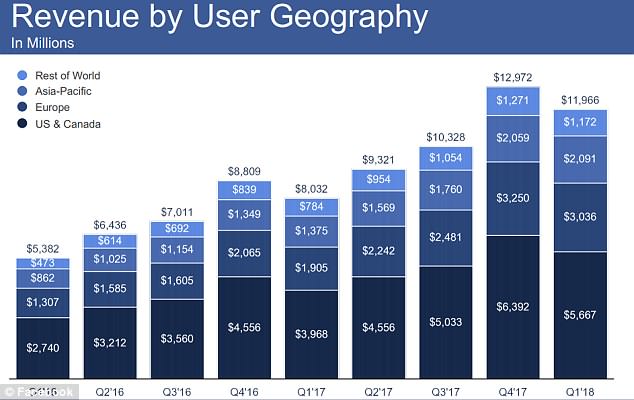 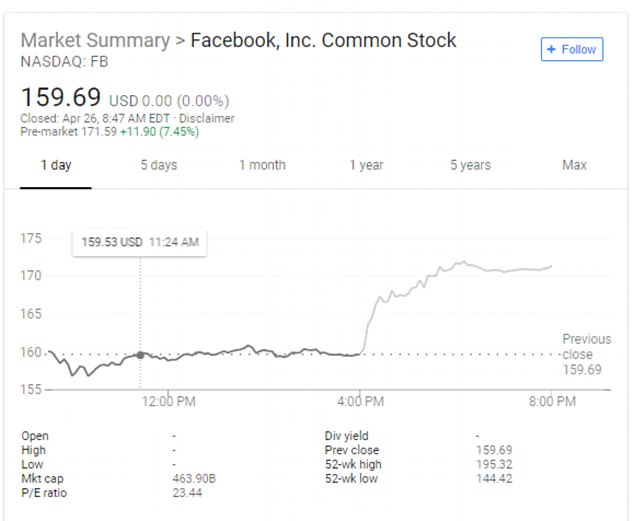 As the earnings report rippled through the industry on Wednesday night, after-hours trading saw stocks rise as high as $170 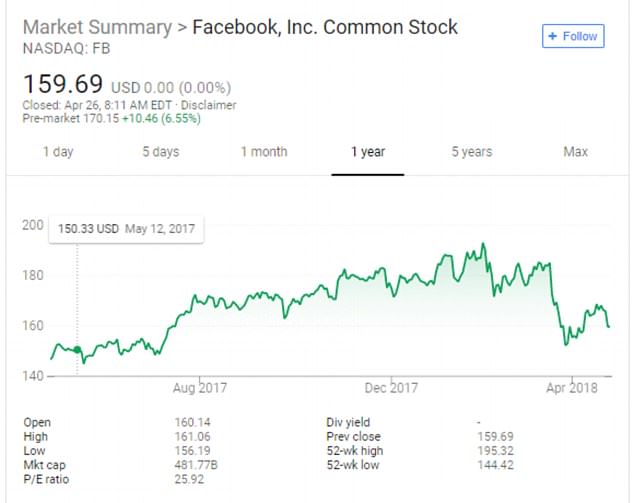 Facebook’s share price plummeted in March amid the Cambridge Analytica scandal but it is slowly recovering. Its record high was in February when shares reached $195

‘We’re working hard to make sure it’s not misused in ways that might discriminate against different groups of people,’ she said.

At 5pm EST on Wednesday, as after-hours trading kicked off, Zuckerberg spoke on a conference call which had been scheduled to discuss the earnings report.

During that call, he said he regretted not devoting more of the company’s time to developing its mobile app in the beginning because it meant it did not have a key role in developing mobile platforms across the industry.

‘One of my great regrets in how we’ve run the company so far is I feel like we didn’t get to shape the way that mobile platforms developed as much as would have been good, because they were developed contemporaneously with Facebook early on.

‘iOS and Android came out around 2007, we were a really small company at that point, so that just wasn’t a thing we were working on.

‘The way that I think about this is that people should really be at the center of how we design technology.