The United Nations migration agency has slammed Facebook for allowing videos of migrants being tortured by people smugglers to remain online for months.

The International Organization for Migration (IOM) say some 260 Somalian and Ethiopian refugees are being held by criminal gangs in Libya, with the footage of their plight posted on social media in order to extort money from their relatives.

A video posted on Facebook in June showed ‘abused Somalis and Ethiopians … huddled fearfully in a concrete room’ sharing stories of being beaten, having teeth pulled out and their arms broken, the IOM said.

Critique: The video allegedly shows refugees being abused, and the footage has reportedly been allowed to remain on Facebook for several months

The agency said some captives’ relatives had received videos through social networks asking them to pay $8,000 to $10,000 ‘or their child or relative will be killed’.

The video footage was first highlighted when it emerged on social media in June, but despite this, the disturbing images allegedly remain on Facebook.

‘It is irresponsible for tech companies like Facebook to ignore this issue,’ Mohammed Abdiker, IOM Director of Operations and Emergencies told The Times.

In the video, posted on Facebook, one refugee calling himself Abdinajib Mohamed speaks to the camera: ‘I am here for a year now. I am in trouble. I am starved.

‘Anyone who has gone through such ordeal would have hated life altogether. Look at my body – they beat me every day with batons. They don’t want to release me.’ 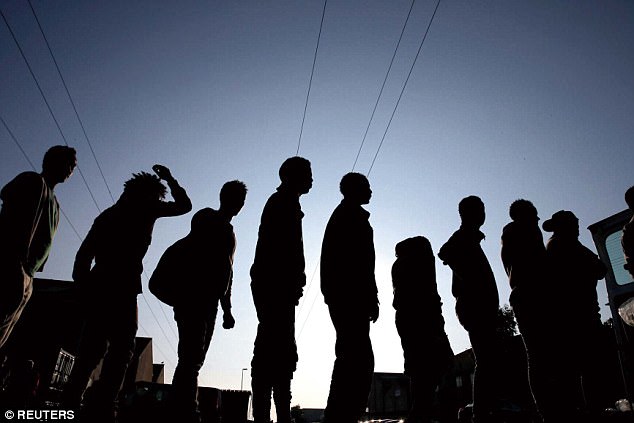 At risk: The people in the video are allegedly from Somalia and Eritrea who are being held by people smugglers in Libya from where they had intended to flee to Europe (pictured are migrants from Ethiopia and Eritrea in Calais, France)

Another young man who called himself Nur Ali Awale said he had been held for 15 months. ‘They beat me with iron bars,’ he said. ‘I travelled from Ethiopia. They ordered me to pay $8,300, and my family cannot afford to pay that amount.’

A veiled woman who said she had travelled from Bossaso city in northern Somalia with her two children said she had been beaten daily.

When the footage first emerged on June 9, Mr Abdiker said: ‘Seeing a Facebook video of innocent migrants and refugees who have been abused and tortured is deeply concerning.

‘IOM condemns the way that criminal gangs use social media in their shocking abuse of people held against their will and to extort money from their families back home,’

‘This is a global problem where a smuggler or a criminal gang can easily use digital platforms to advertise their services, entice vulnerable people on the move and then exploit them and their families.

‘It is high time that social media and tech companies recognize the extreme harm that is occurring because of their failure to monitor and react to situations of grave human rights abuses – leading ultimately to murder – that are being shared through their channels.’

The IOM has long decried risks taken by human traffickers with the migrants and refugees they ferry through relatively lawless Libya and into the Mediterranean sea by boat en route to Italy.

Libya has been without a stable, central government since the fall of Muammar Gaddafi in 2011, and has been a major departure point for tens of thousands of people, mostly from the Horn of Africa, who seek to cross the Mediterranean to reach the EU.