Facebook shares have slumped 5.3 percent as the social media company faces mounting calls to testify over the Cambridge Analytica scandal following reports that data of 50 million users were misused.

The company’s falling stock on Monday put Facebook on track for their worst day in 16 months by knocking $21.5 billion off the social network’s market value of $538 billion as of Friday’s close.

It comes in the wake of reports that a political consultancy that worked on President Donald Trump’s campaign gained inappropriate access to data on 50 million Facebook users.

The reports have prompted a review by the company and expressions of concern by several US lawmakers who are demanding that CEO Mark Zuckerberg be grilled by the Senate Judiciary Committee.

Facebook shares slumped 5.3 percent on Monday as several US lawmakers demanded that Mark Zuckerberg be grilled over the Cambridge Analytica data scandal

One Wall Street analyst said the reports raised ‘systemic problems’ with Facebook’s business model and a number said it could spur far deeper regulatory scrutiny of the platform.

‘We think this episode is another indication of systemic problems at Facebook,’ said Brian Wieser, analyst at New York-based brokerage Pivotal Research Group, which already has a ‘sell’ rating on a stock that rose 60 percent last year.

Wieser argued that regulatory risks for the company would intensify and enhanced use of data in advertising would be at greater risk than before.

He added, however, that it was unlikely to have a meaningful impact on the company’s business for now, with advertisers unlikely to ‘suddenly change the trajectory of their spending growth on the platform’.

The losses in shares on Monday would be Facebook’s biggest daily fall since a broader market pullback in February.

In January, when Facebook announced changes to its newsfeed, which it said would hit user engagement in the near term, shares fell 4.5 percent in one day.

Technology stocks have powered the stock market’s rally over the past year and have been the best performing among the 11 S&P sectors.

The S&P technology index, which has powered the stock market’s near relentless rally, retreated 1.2 percent.

Amazon, Apple, Netflix and Alphabet – all part of the so-called FAANG group of heavyweight stock, along with Facebook – were down between 0.7 percent and 2.25 percent. 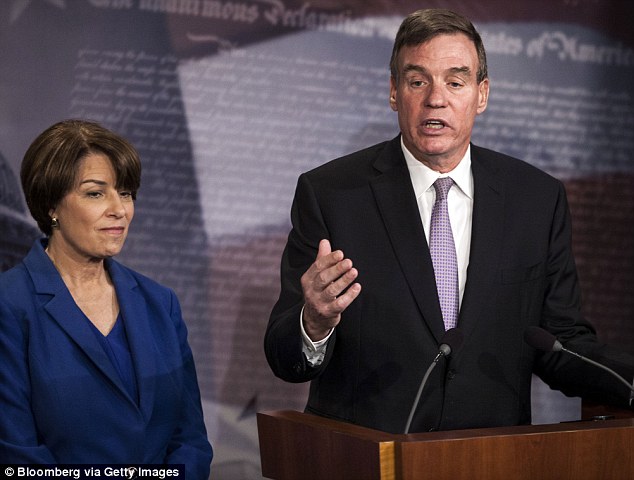 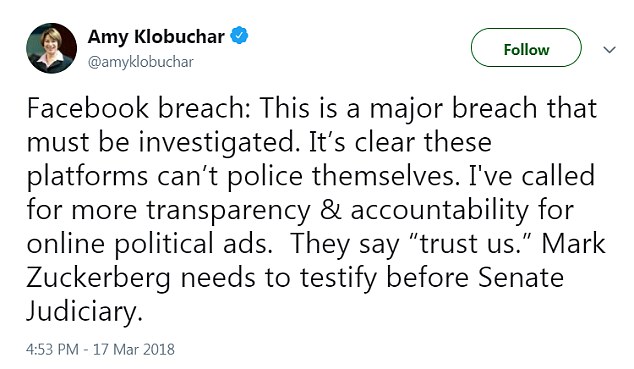 Facebook has been facing new calls for regulation from US Congress and questions about personal data safeguards after the reports from the New York Times and London’s Observer over the weekend regarding the Cambridge Analytica scandal.

The papers reported on Saturday that private information from more than 50 million Facebook users improperly ended up in the hands of data analytics firm Cambridge Analytica, and that the information had not been deleted despite Facebook demands dating back to 2015.

Sen Amy Klobuchar tweeted on Saturday: ‘This is a major breach that must be investigated. It’s clear these platforms can’t police themselves.

‘This is more evidence that the online political advertising market is essentially the Wild West,’ he said. ‘It’s clear that, left unregulated, this market will continue to be prone to deception and lacking in transparency.’

Massachusetts Attorney General Maura Healey said on Twitter that ‘Massachusetts residents deserve answers’ and announced that her office will investigate.

Cambridge Analytica is best known for working on Trump’s 2016 campaign.

Reports stated that senior members of Cambridge Analytica met with Russian business executives ahead of the 2016 campaign.

Facebook suspended the group on Friday for not fully deleting all of the data it had obtained.

A British lawmaker accused Facebook on Sunday of misleading officials by downplaying the risk of users’ data being shared without their consent.

Conservative legislator Damian Collins, who heads the British Parliament’s media committee, said he would ask Zuckerberg or another Facebook executive to appear before his panel, which is investigating disinformation and ‘fake news’.

Collins said Facebook has ‘consistently understated’ the risk of data leaks and gave misleading answers to the committee.

‘Someone has to take responsibility for this,’ he said. ‘It’s time for Mark Zuckerberg to stop hiding behind his Facebook page.’ 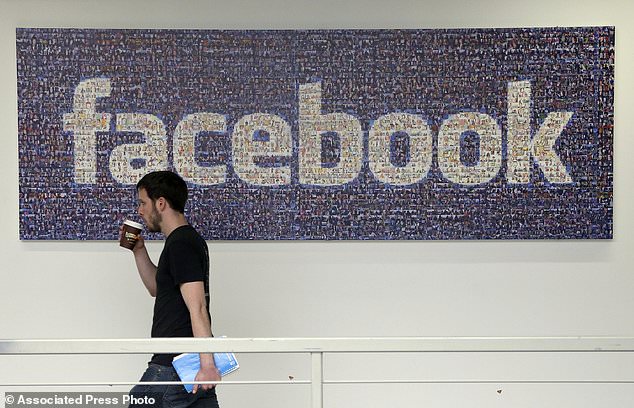 It follows reports that Cambridge Analytica, which is best known for working on Trump’s 2016 campaign, had improperly obtained Facebook user data and retained it after claiming it had deleted the information

Nix told the committee last month that his firm had not received data from a researcher accused of obtaining millions of Facebook users’ personal information.

Former Cambridge Analytica employee Chris Wylie said that the company obtained information from 50 million Facebook users, using it to build psychological profiles so voters could be targeted with ads and stories.

Wylie told Britain’s Channel 4 news that the company was able to amass a huge database very quickly from an app developed by an academic that vacuumed up data from Facebook users who agreed to fill out a survey, as well as their friends and contacts – a process of which most were unaware.

‘I don’t just capture what your responses are, I capture all of the information about you from Facebook. But also this app then crawls through your social network and captures all of that data also.’

Wylie said that allowed the company to get roughly ’50 million plus’ Facebook records in several months. He also criticized Facebook for facilitating the process.

‘Why Facebook didn’t make more inquiries when they started seeing that, you know, tens of millions of records were being pulled this way, I don’t know,’ he said.

Lawmaker Collins said he would summon Nix to reappear before the Parliament committee.

‘It seems clear that he has deliberately misled the committee and Parliament by giving false statements,’ Collins said.