Facebook has launched the Climate Science Information Centre – a dedicated webpage on the site that collects resources from climate experts.

The new feature collects resources from reputable climate experts, including the UK’s Met Office and the UN Environment Programme.

The feature is like a climate version of the platform’s Covid-19 Information Centre, which was introduced earlier in the year to combat coronavirus-related misinformation.

It’s hoped the feature will educate climate sceptics during a crucial time for climate change awareness.

Facebook has also promised to power its entire global operations with renewable energy, such as wind and solar, by the end of this year.

Emulating a similar promise by Apple, the company will also reach net zero emissions throughout its value chain by 2030 – meaning emissions of greenhouse gases will be offset by its operations.

The announcements follow Google’s claim on Monday that it has just offset all carbon emissions it ever created.

The Climate Science Information Centre, a separate is a dedicated space on Facebook that connects our community with factual resources from the world’s leading climate organisations including The Met Office in the UK

‘Climate change is real – the science is unambiguous and the need to act grows more urgent by the day,’ Facebook said in a blog post.

‘As a global company that connects more than 3 billion people across our apps every month, we understand the responsibility Facebook has and we want to make a real difference.

‘That’s why today, ahead of Climate Week, we are announcing a new Climate Science Information Centre to connect people with science-based information.’

The dedicated webpage is much like its Covid-19 Information Centre, created in March this year in response to the current health pandemic.

The Covid-19 Information Center already acts as a hub for easy access to reputable information about the viral disease, from sources such as the World Health Organisation, the NHS and the government.

‘One of the biggest lessons we have learned from the Covid-19 pandemic is how powerful Facebook can be for connecting people to accurate, expert advice and information during a global crisis,’ Facebook said. 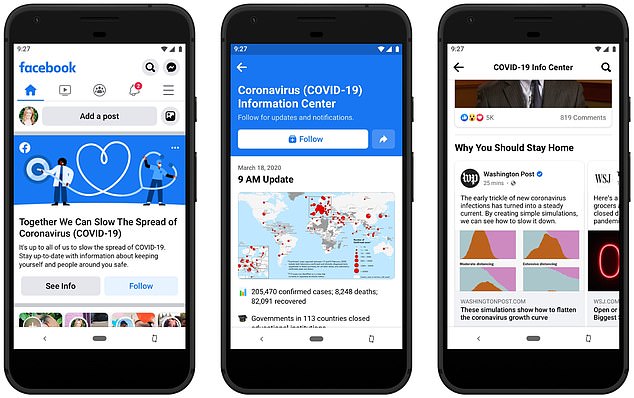 The Covid-19 Information Center, featured at the top of News Feed, provides a central place for people to get the latest news and information as well as resources and tips to stay healthy

‘Now, we are taking a similar approach to the climate crisis by launching a new Climate Science Information Centre on Facebook to connect people to factual and up-to-date climate information.’

Climate Science Information Centre will feature facts and figures from the Intergovernmental Panel on Climate Change (IPCC) and their network of partners.

‘Harnessing the best available climate science is our best guide to inform how we can avoid the worst impacts of climate change, but also to help us live with those impacts for which it is too late to avoid.

‘Facebook’s Climate Science Information Centre will provide a central and accessible source for all this information.’

The new Centre rolls out today for Facebook users in the UK, the US, France and Germany and will come to other countries soon.

Dubious information on the site features a warning label on top ‘so people understand that the content has been rated false’. 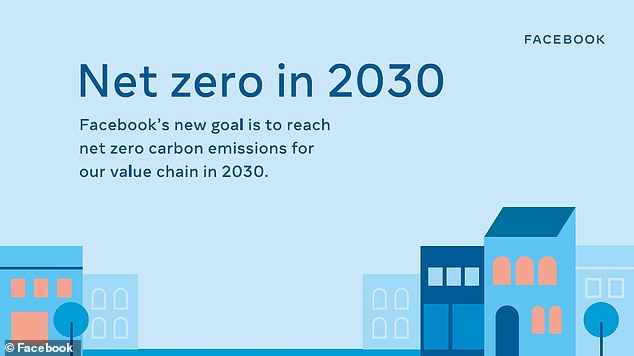 Facebook used the launch to announce that its global operations will achieve net zero carbon emissions, from its offices to its data centres.

In the longer term, net zero carbon emissions will be achieved in its entire value chain as well by 2030.

This includes emissions from suppliers and other factors such as employee commuting and business travel.

The company will achieve this by reducing carbon emissions through efficient designs, supplier engagement and ‘carbon removal technology’.

Facebook used 3.43 terawatt hours of electricity in 2018, according to Statista – with one terawatt hour being one trillion watts over the course of one hour.

‘Over the next decade, Facebook will work to reduce carbon emissions from our operations and value chain, including by working with suppliers on their own goals, helping the development of new carbon removal technologies and making our facilities as efficient as possible,’ the social network said. 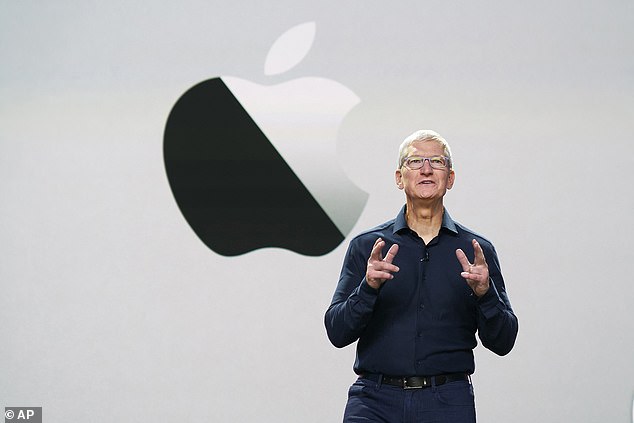 CEO Tim Cook tweeted that Apple’s entire business will be carbon neutral by the year 2030. ‘The planet we share can’t wait, and we want to be a ripple in the pond that creates a much larger change,’ he said

In July, Apple said it will be 100 per cent carbon neutral by 2030 by offsetting emissions of the greenhouse gas from its operations.

The iPhone maker said it will have a net zero carbon footprint in 10 years across its entire business, including its manufacturing supply chain.

Apple is already carbon neutral for its global corporate operations, such as its offices and data centres, which are powered by 100 per cent renewable energy.

The recent commitment means every Apple device sold, including iPhones and Mac computers, will have net zero climate impact, according to the company.

Microsoft pledged earlier this year to become carbon negative by removing more carbon from the atmosphere than it emits by 2030.

By 2050, Microsoft will also remove from the environment all the carbon the company has emitted either directly or by electrical consumption since it was founded in 1975.

Meanwhile Amazon has a target of 2040 to become carbon neutral, while Google, which relies on wind power to support operations at its data centres, became carbon-neutral in 2007.

In a blog post on Monday, Google said it has now compensated for all of the carbon it has ever created.

‘As of today, we have eliminated Google’s entire carbon legacy (covering all our operational emissions before we became carbon neutral in 2007) through the purchase of high-quality carbon offsets, Google CEO Sundar Pichai said.

‘This means that Google’s lifetime net carbon footprint is now zero. We’re pleased to be the first major company to get this done, today.’

WHAT IS CARBON NEUTRALITY?

Carbon neutrality means having a balance between emitting carbon and absorbing carbon from the atmosphere.

However, this is difficult for big companies like Apple to do, meaning they plug their efforts into the fact they offset their emissions with green projects.

Removing carbon dioxide from the atmosphere and then storing it is known as carbon sequestration.

In order to achieve net zero emissions, all worldwide greenhouse gas emissions will have to be counterbalanced by carbon sequestration.

Renewable sources of energy like solar and wind have low carbon footprints.