Facebook will not compensate any of its users after the Cambridge Analytica scandal saw millions of people’s data taken for political gain.

The social network today announced there would be no payout for anyone who had their data breached by the political consultancy during various election campaigns.

It made the statement in a list of written replies to questions posed to CEO and founder Mark Zuckerberg in Brussels on Tuesday.

Two days ago he apologised for the data breach and letting fake news spread across the website, but was slammed after a bizarre Q&A format allowed him to dodge several questions.

Zuckerberg requested that MEPs ask him questions all at once so he could answer them at the end of the hearing on Tuesday.

But after an hour and a half he had not got to answer a single question, making his replies seem vague and unfocused when they finally came.

Today’s statement came after the Facebook chief promised to respond to the questions he hadn’t addressed in writing – before exiting Parliament leaving behind an unsatisfied huddle of MEPs.

Cambridge Analytica used the data of millions of Facebook users to personalise adverts during political campaigns, including the US presidential vote.

EU lawmakers argued on Tuesday that it made Facebook liable for compensation toward EU users.

Although the social network agreed that was a ‘breach of trust,’ they claimed no bank account details had been shared.  And it said there was no evidence EU user data had been involved.

Damian Collins, chair of the British Digital, Culture, Media and Sport committee hit out against Zuckerberg after the Brussels grilling this week. 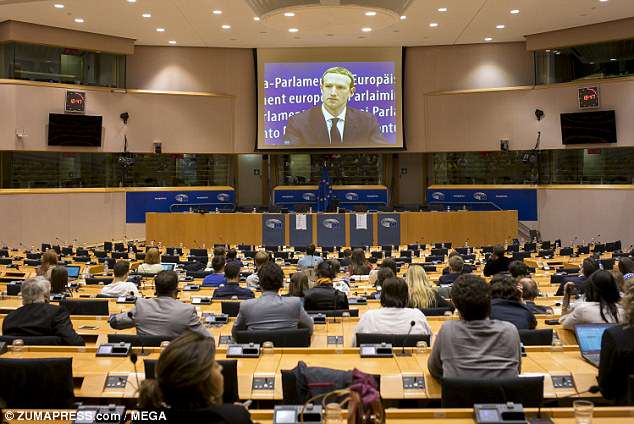 Although the social network agreed that was a ‘breach of trust,’ they claimed no bank account details had been shared. Pictured: Zuckerberg faces MEPs in Brussels on Tuesday

He said: ‘What a missed opportunity for proper scrutiny on many crucial questions raised by the MEPs.

‘Questions were blatantly dodged on shadow profiles, sharing data between WhatsApp and Facebook, the ability to opt out of political advertising and the true scale of data abuse on the platform.

‘Unfortunately, the format of questioning allowed Mr Zuckerberg to cherry-pick his responses and not respond to each individual point.

‘I echo the clear frustration of colleagues in the room who felt the discussion was shut down.

‘It is time that Mr Zuckerberg agreed to appear in front of the DCMS committee to provide Facebook users the answers they deserve.’

Zuckerberg took questions from US lawmakers earlier this year, but has so far refused to come to Britain to face MPs.