Women who look 50 years old are thought to be 48 after just 20 weeks of facial ‘workouts’, with puckering the lips and sucking in the cheeks being the most age-defying movements, a study found.

This is thought to be due to facial exercises increasing the size of muscles in the face, making cheeks look fuller and firmer, according to the researchers.

Lead author Dr Murad Alam from Northwestern University describes facial yoga as ‘non-invasive, non-toxic, at-home exercises that anyone can perform [that] can possibly slow or correct the appearance of volume loss in the face.

‘Facial attractiveness and youth are associated with a smooth, full facial contour, so even a modest improvement of facial contour is a win for patients.’

The researchers analyzed 16 healthy women aged between 40 and 65 years old with skin damage from UV radiation, mild to moderate facial skin cell degeneration and an interest in facial exercises between March and July 2013.

All of the participants attended two 90-minute facial exercise sessions from a trained instructor who taught them how to do 32 workouts including smiling and sucking in their cheeks.

They then performed 30-minute exercises every day for eight weeks at home.

Nine to 20 weeks into the study, the participants practiced the movements every other day.

The participants completed a questionnaire that rated how satisfied they were with the results.

OTHER FACIAL YOGA POSES TO FIGHT THE SIGNS OF AGING 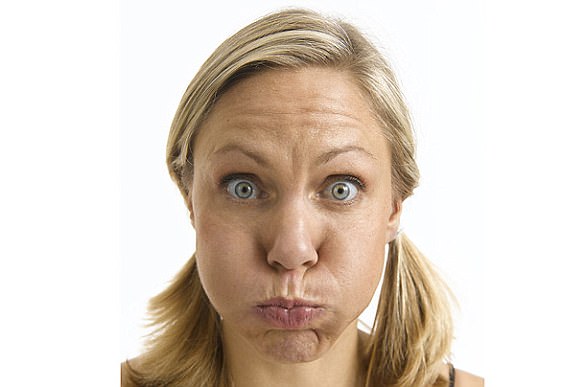 Puff up both cheeks with air, then transfer the air from cheek to cheek. Alternate from side to side until you run out of breath. Repeat three times.

This is thought to keep cheeks firm. 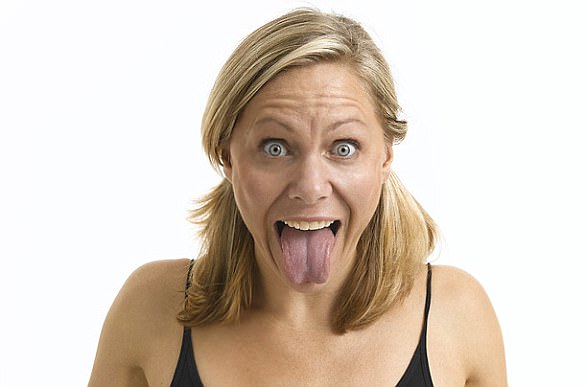 Involves inhaling through the nose, while making fists and squeezing your facial muscles. Then, exhale through the mouth, stick out your tongue, roll your eyes and open your hands. Repeat three times. 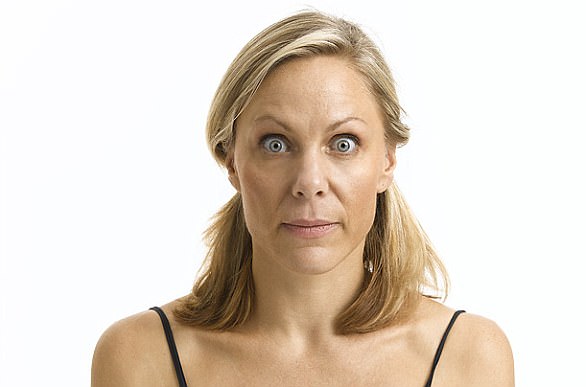 ‘Surprise me’ smooths wrinkled brows by practicing a startled expression

Involves widening your eyes without wrinkling the brow, then focusing on a point in the horizon for five to 10 seconds. Repeat four times.

It also increases protein and hormone levels that are associated with improved resilience to stress, the research adds.

From a physical health perspective, yoga and meditation reduce inflammation, which is linked to improved function of the central nervous and immune systems, the study found.

Lead author Dr Rael Cahn from the University of Southern California, said: ‘To our knowledge, our study is the first to examine a broad range of pro- and anti-inflammatory markers in a healthy population before and after a yoga-meditation intervention.’

Women who were judged to look 50.8 years old, are thought to be 49.6 and 48.1 years old after eight and 20 weeks, respectively, of exercising their faces.

The study’s participants were highly satisfied with the outcomes, noting significant improvement in 18 out of 20 of their facial features.

The findings were published in the journal JAMA Dermatology.

Too much facial yoga may cause wrinkles

Dr Alam adds, however, certain facial exercises may be aging.

For instance, frequently frowning can cause people to develop deep vertical creases between their eyebrows, while smiling can lead to crow’s feet around the eyes.

It is unclear how long it takes for such exercises to have a potentially negative impact on people’s appearances.

Dr Alam said: ‘Maybe we can “have our cake and eat it, too,” meaning we can build up our cheek muscles without doing many exercises that worsen the [wrinkles in the] forehead and eyelids.

‘Facial attractiveness and youth are associated with a smooth, full facial contour, so even a modest improvement of facial contour is a win for patients.

‘[These are] non-invasive, non-toxic, at-home exercises that anyone can perform [that] can possibly slow or correct the appearance of volume loss in the face.’