Shameless begging gangs are making children as young as three hug strangers in the street until they hand over cash, MailOnline can reveal.

Shameless begging gangs are making children as young as three hug strangers in the street until they hand over cash, MailOnline can reveal. Picture: A young boy targets a shopper 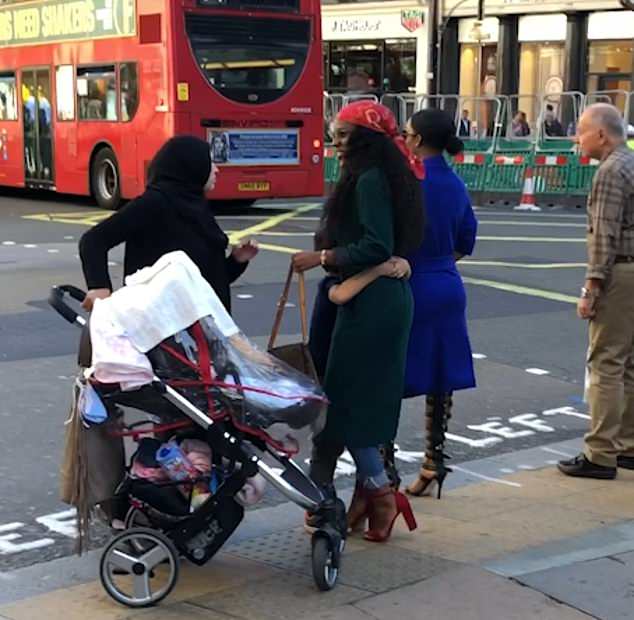 Shocking footage, obtained by MailOnline, shows the youngsters targeting often wealthy shoppers in London’s Oxford Street. Picture: A boy aged around seven clamps himself around stunned tourist Shanice Braithwaite for nearly 20 seconds as she waits to cross the road 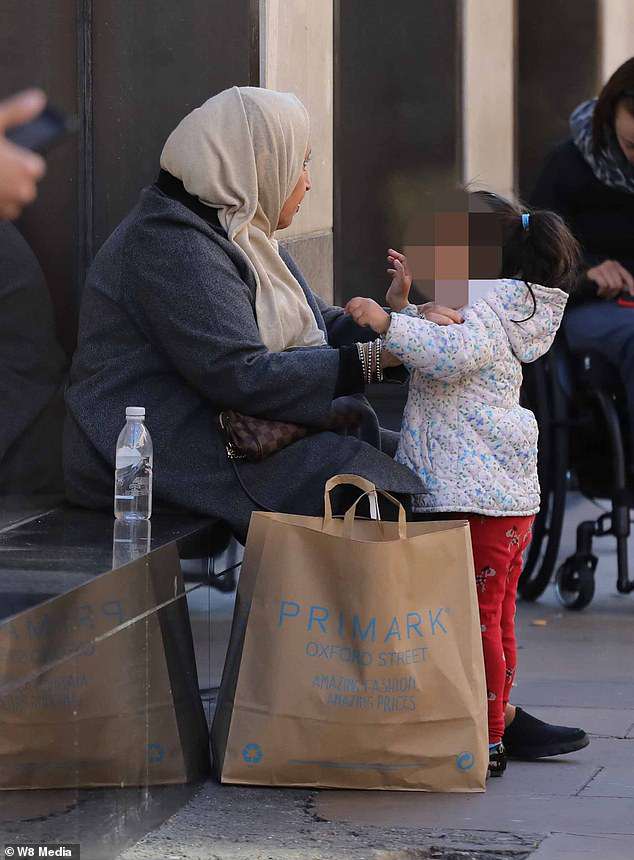 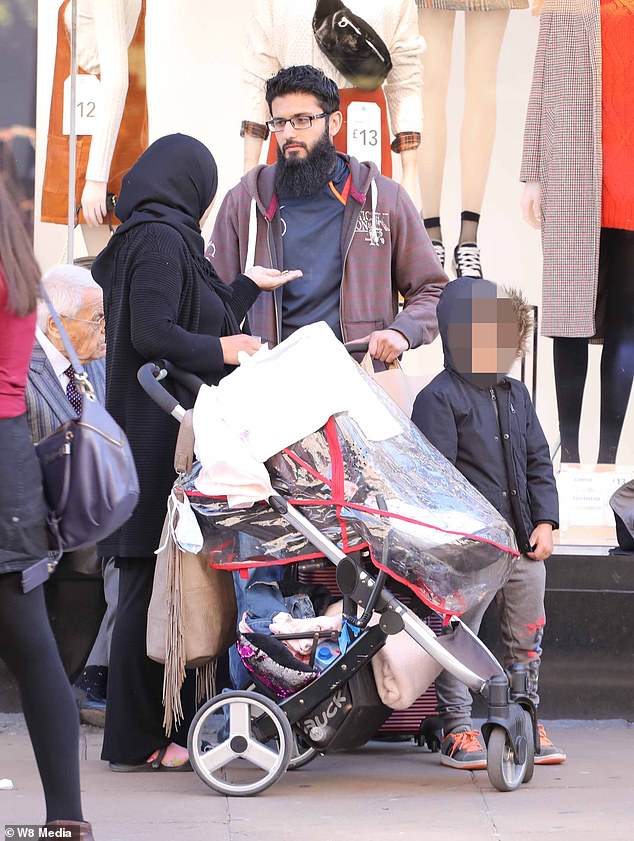 A woman pushing a pram is pictured begging for money from a male shopper along with her school-age children. Kids were filmed hugging their victims and asking for their cash

In the footage a boy of school age, around seven-years-old, clamps himself around stunned tourist Shanice Braithwaite for nearly 20 seconds as she waits to cross the road.

A woman with a pushchair hovers beside him and holds out an open palm for money.

Afterwards, Shanice, 28, who is visiting London with her friend from Barbados, said: ‘This little boy came up to me and put his arms around my waist and asked if I had any spare change. 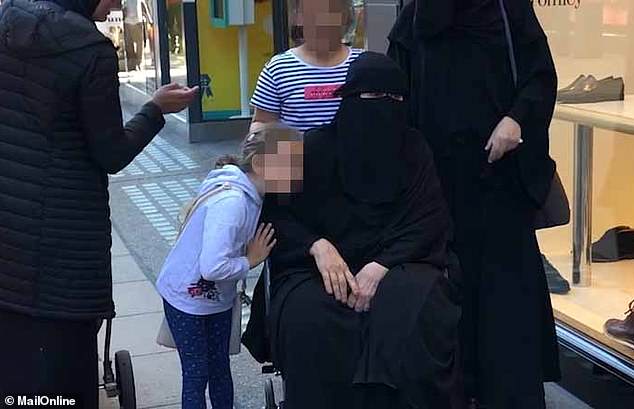 In footage obtained by MailOnline, an angelic blonde-haired girl of about five or six-years-old approaches accosts a wheelchair-bound woman victim wearing a full veil who warns her off 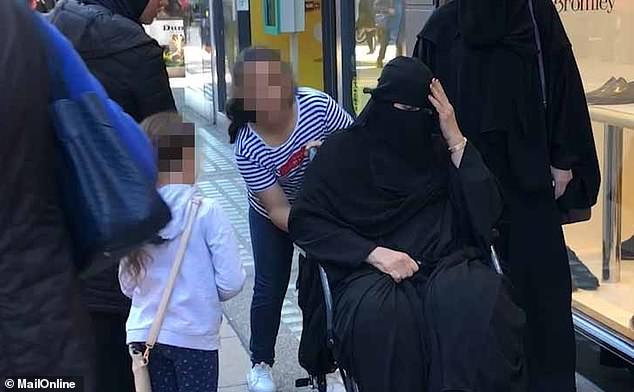 The woman victim in a wheelchair brushes the girl away as she is pushed by a little girl. Traders say the gangs, who reportedly come in from Ilford in Essex, spend all day accosting shoppers

‘I told him that I don’t normally have cash and pay for most things by card.

‘He kept his arms around me for a while and I wondered what was going on. Nothing was stolen because I checked straight away.

‘His mother, or a woman looking after him, asked for money too but I had nothing on me to give.’

About an hour earlier a little girl, aged no more than three-years-old, had been made to try the same trick.

She had been ordered to approach shoppers sitting on a small ledge outside the Primark clothing store on Oxford Street. The girl then reaches out and tries to hug one woman, but is shooed away.

She tries again and hugs another woman sitting nearby, who is chatting on the phone, but again ends up empty-handed.

Like with the young boy, a woman flanks her throughout with a pushchair holding her hands out pleading for money.

Further down Oxford Street towards Debenhams, they order an angelic blonde-haired girl of about five or six-years-old to approach Middle-Eastern customers.

She tries to stop two men in their stride by pleading for spare change, tugs at a woman’s mobile phone and accosts a wheelchair-bound woman wearing a full veil who warns her off.

‘I’ve seen people give these kids £20 and £50 notes, either out of pity or to make them leave them alone.

‘So for the gangs manipulating these youngsters, it can be a real money-spinner.

‘They usually target Muslim or Arab shoppers, particularly those who look like they have a lot of money. 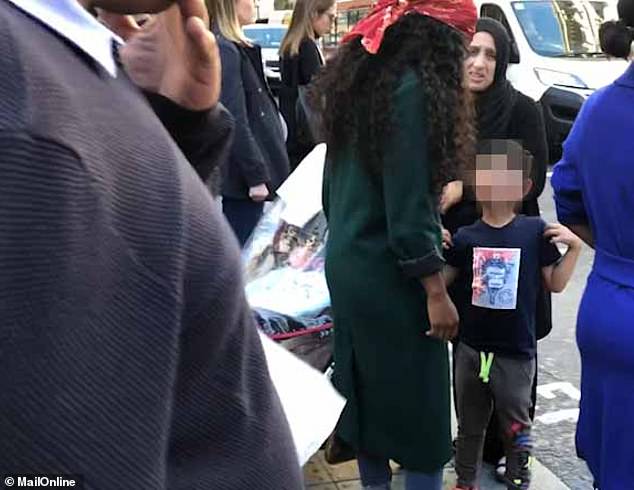 Shanice Braithwaite (pictured in green), who was targeted by a boy and his mother in a head scarf, said: ‘This little boy came up to me and put his arms around my waist and asked if I had any spare change’ 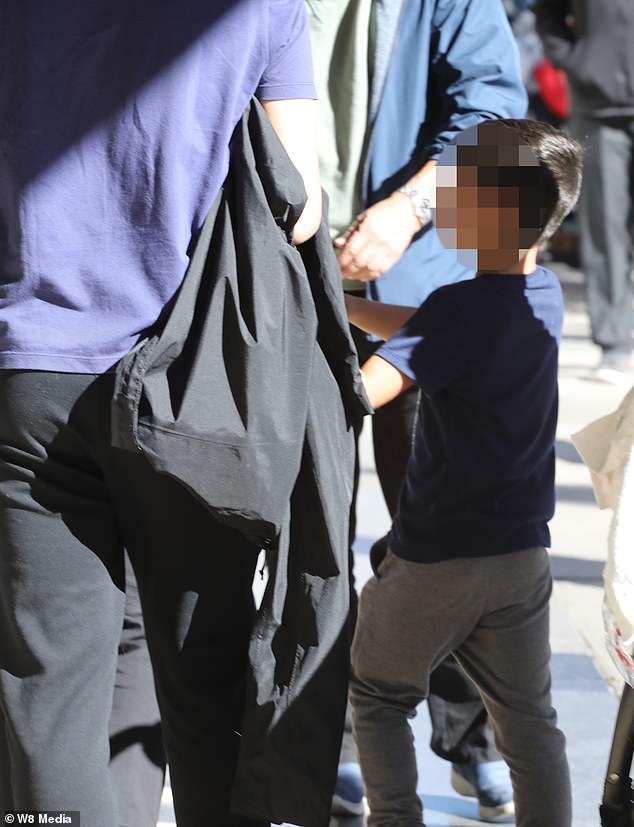 The same boy, who is of school age, approaches another shopper on the busy street in the hope of being given some money. Victims often pay the children, who refuse to let go 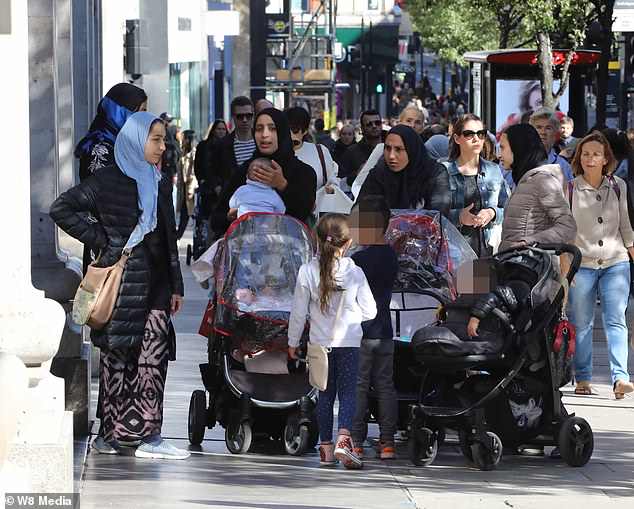 The beggars (pictured) and their children youngsters are part of a professional criminal network who are controlled by ringleaders, claims one Oxford stall holder

‘They’ll speak a little Arabic to them to try and charm their victims into parting with their money.

‘But it’s very unsavoury seeing little children put in that position by adults who are looking after them.’

Speaking on the guarantee of anonymity, an Oxford Street stall holder told how the youngsters were part of a professional criminal begging network, which also includes men pretending to be disabled.

The businessman said: ‘I spoke to one of the beggars once and asked why they did it.

‘She said that they come to London for a few months and are then sent somewhere else.

‘But it’s not right because some of the children they use should probably be in school but are instead dragged up and down Oxford Street all day long to beg in all weathers.

‘And sometimes they’re not just hugging people to beg for money, we’ve had people approach the stall asking us if we’ve seen their purse or phone and its usually after they’ve given money to one of these youngsters.

‘Yet if you challenge them, the adults in the gangs can turn really nasty.

‘We’ve tried to move them away from begging around the stall and it’s resulted in us being spat at, sworn at and pelted with bits of food and other missiles.

‘They must feel invincible though because little is ever done about the problem and they get away with it time and again.’

The stall holder added: ‘They are part of a big group of beggars, who include two men who hobble around on crutches pretending to have uncontrollable shakes.

‘Yet as soon as they’ve got enough money, they’ll turn a corner and walk off normally. It’s all a big scam.’