Motorists watched on in horror as a man was thrown against a fence and pinned in a headlock during a wild road rage attack in Sydney’s west.

The two men left their cars running along The Horsley Drive in Fairfield on Tuesday afternoon and started trading blows as traffic began to back up.

Dash cam footage captured the pair attempting to dodge each other’s punches in broad daylight as motorists tried to overtake them.

At one point, the smaller man was pushed off the road and onto the footpath where the brawl continued.

He was eventually grabbed by the arm and swung around before crashing into an oval fence.

The bigger man placed his arm around the man’s head before putting him into a headlock.

It is not known what sparked the road rage attack.

Meanwhile the video has been uploaded to Facebook and already received more than 8,000 views.

Social media users have taken to the video to slam the pair caught in the scuffle.

‘That’s when you know you’re in the area,’ one person said. 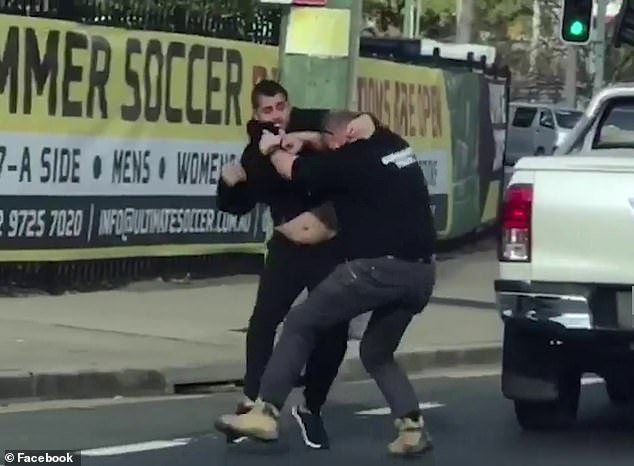 At length, the smaller man is pushed off the road and onto the footpath where the brawl continues