A Covid-19 testing company in California has agreed to pay over $22 million in fines after they admitted to faking test results to patients.

Sameday Technologies, which operates the testing centers Sameday Health nationwide, admitted to falsely claiming that their lab could turn around Covid tests in 24 hours.

In some cases, test results were given to patients even before the samples had reached the lab while others were simply never tested at all. Consumers were charged $195 for the bogus tests.

Sameday was founded in a 2020 by entrepreneur Felix Huettenback. He claimed that his company would ‘rebuild the healthcare system with the patient at the center’

According to the Los Angeles City Attorney’s Office’s criminal complaint in the case, the company knew that they could not meet the claims they made.

The labs that worked with Sameday told the company that the results could not be turned around at that speed, the complaint said.

The city attorney said that around 500 people’s tests were either fake or forged. The company did this by doctoring old PDFs of test results. 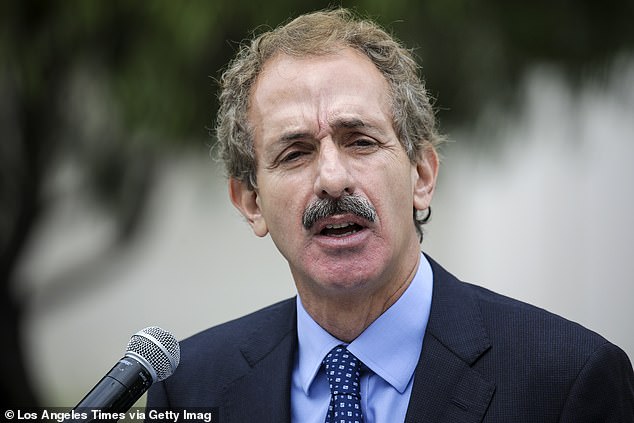 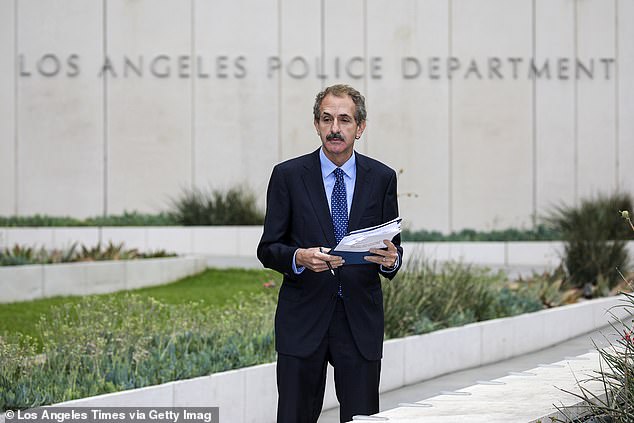 In total, Sameday has agreed to pay fines of more than $22 million. The city attorney said that citizens went about their normal lives thinking they were healthy when in reality they were given fake results

Feuer said that patients went to Sameday in good faith and when they received negative test results, went on living their lives by going to work and on vacations. All the time they could have been spreading Covid, Feuer said.

The criminal complaint goes on to accuse Sameday Health CEO Felix Huettenbach of requiring insured patients to be screened by a physician during the testing process. 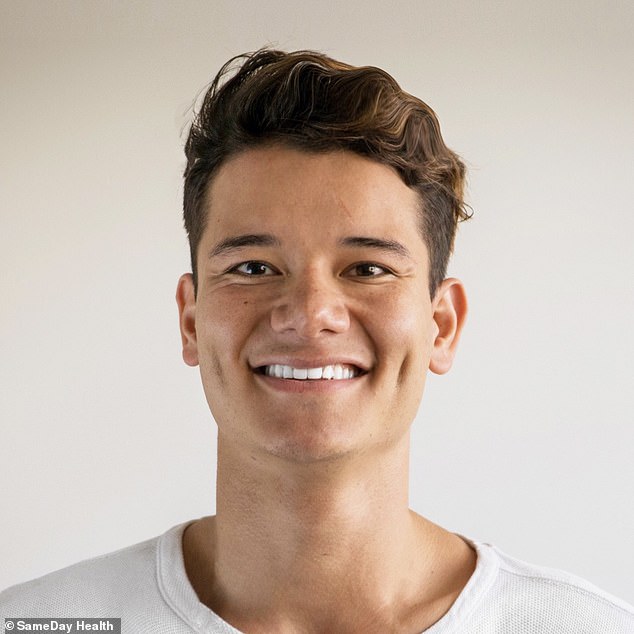 The founder of Sameday, Felix Huettenbach is a graduate of both MIT and the University of California, Berkeley

According to his LinkedIn page, Huettenbach founded Sameday in September 2020. He describes the company on his page as ‘Rebuilding the healthcare system with the patient at the center.’

The complaint says that those who were paying with cash did not require the physician’s screening nor were they allowed to access the doctor. 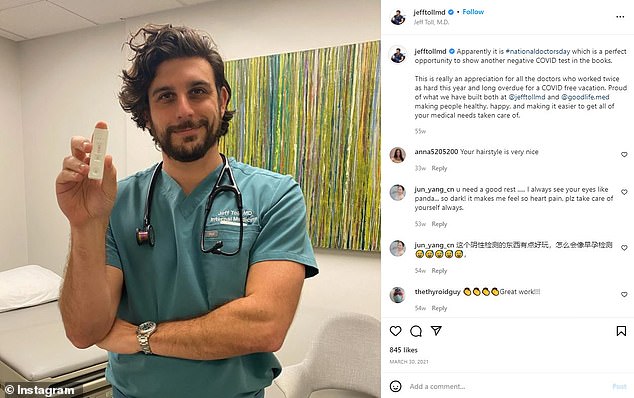 Doctor and podcast host Dr. Jeff Toll, pictured above, is accused of doing patient screenings for Sameday that were mandatory for customers who had health insurance 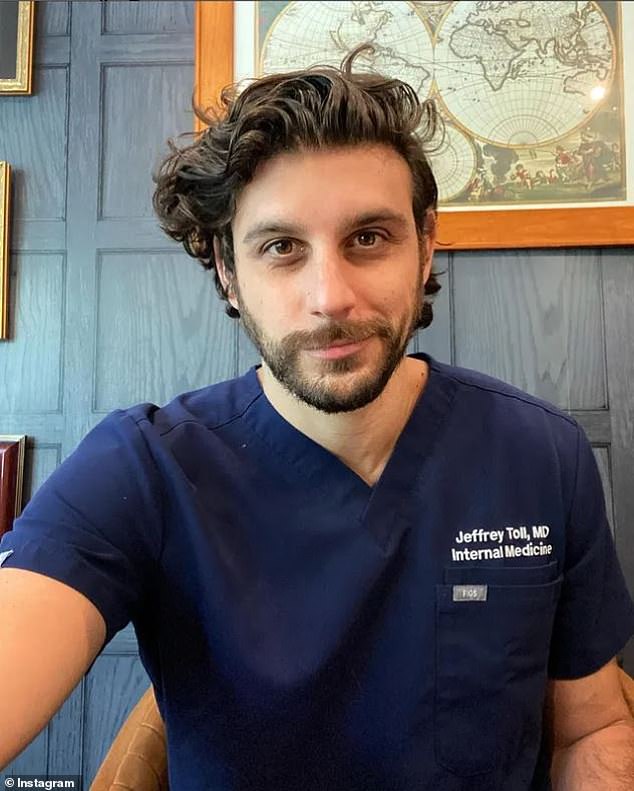 According to the criminal complaint in the case, Toll would bill insurance companies more than $400 for his consultations

Authorities accuse hunky celeb doctor Jeff Toll of being the physician doing the screenings. For those screenings, the complaint says that Toll’s office charged the insurance companies more than $400 per consultation.

Toll is accused of giving some of the profits he made from the screenings back to Sameday as a ‘kickback.’ 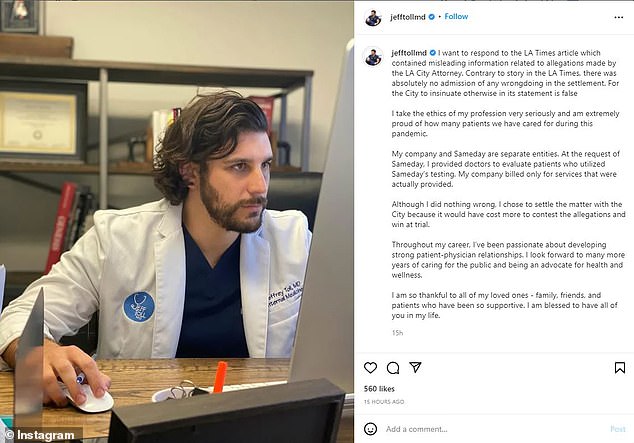 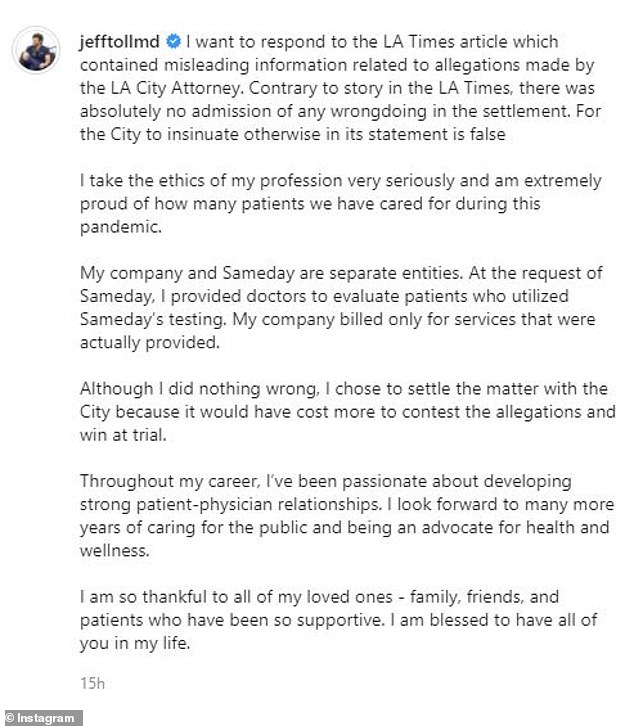 On his Instagram page, Toll boasts more than 36,000 followers. He told them in his statement that he was proud of the work his office has done during the Covid-19 pandemic 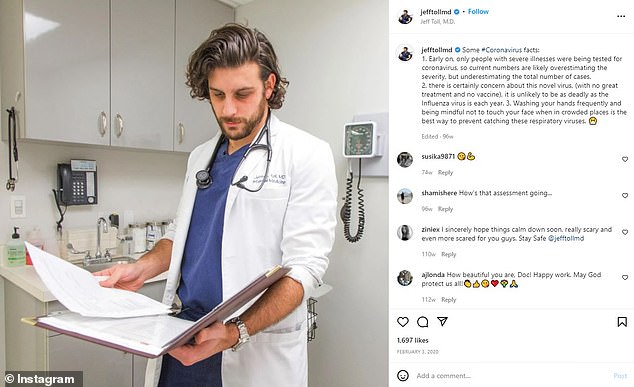 Toll’s fines amount to $3.9 million. It is separate from Sameday’s $22 million fine

As part of the settlement, Toll will have to pay $2.8 million in restitution and $1.15 million in civil penalties. That is separate from Sameday’s fine.

In a Facebook post, Toll denied any wrongdoing in the case saying that the settlement is not an admission of guilt. 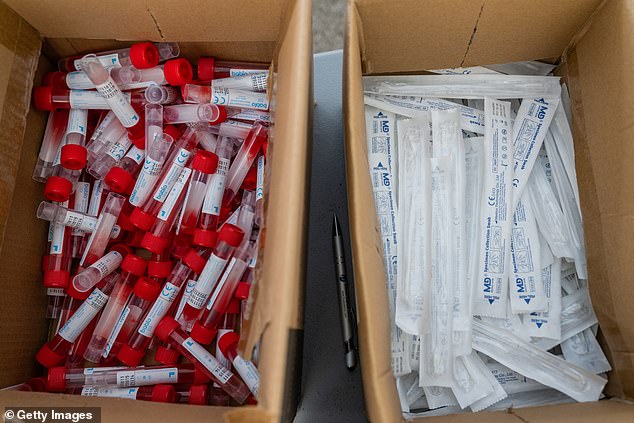 In March 2022, Sameday posted an article on their website about how lucrative it was to set up a Covid-19 testing business in Los Angeles

Toll wrote in part, ‘I take the ethics of my profession very seriously and am extremely proud of how many patients we have cared for during this pandemic.’

Toll said that he is a separate entity from Sameday and that he only billed for the services that were ‘actually provided.’

The doctor added, ‘Although I did nothing wrong, I chose to settle the matter with the City because it would have cost more to contest the allegations and win at trial.’ In total, Toll’s fines amount to $3.9 million. 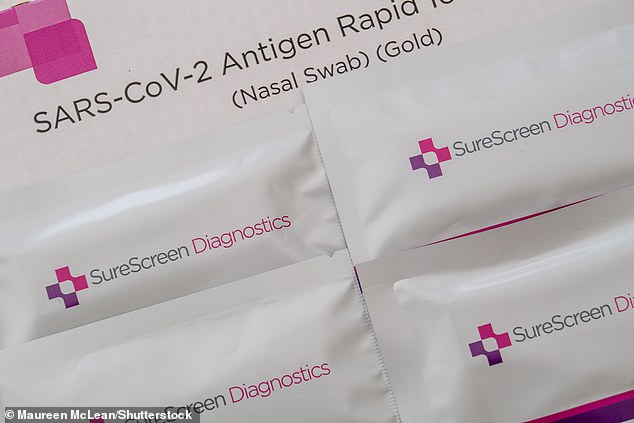 In a brief statement, Sameday said in part, ‘We have corrected the problems that arose back in 2020 and have made significant investments in compliance and systems to ensure that we meet our customers’ expectations’

Following the settlement, Sameday told The Los Angeles Times in a statement, ‘In the early days, amidst the chaos of massive surges in demand for services, and shortages in supplies, we failed to meet the standards for excellence our customers deserve. We have corrected the problems that arose back in 2020 and have made significant investments in compliance and systems to ensure that we meet our customers’ expectations.’ 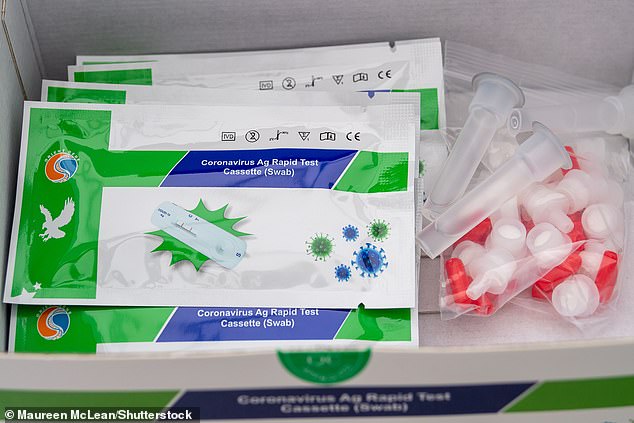 The case of Sameday is remarkably similar to the controversy surround the phony bloodtesting company Theranos and their founder, Elizabeth Holmes

In March 2022, the company shared an article on their website from the Los Angeles Business Journal about how profitable it was to set up a Covid-19 testing company in LA.

This case comes amid renewed interest in Theranos founder Elizabeth Holmes who in 2015 was found to have misled the public about her company’s revolutionary blood testing capabilities. As of April 2022, Holmes, 38, is awaiting sentencing on wire fraud charges. In total, she could face up to 20 years in prison.