A father has told of his heartbreak after his son inherited the same rare degenerative neuromuscular disease as him and is now struggling with his mobility – aged just five.

Andrew Frerich and son Calum both live with Charcot-Marie-Tooth disease (CMT), which causes muscle weakness in the limbs.

But Mr Frerich – who inherited the condition from his late father – says he does not want his son to be held back in life.

Thankfully, Calum’s twin sister Amber and brother Dylan, eight, are not inflicted with CMT despite a 50/50 chance of them having it.

Mr Frerich, who suffered crippling pain growing up, said: ‘We don’t put any limits on Calum. Anything he wants to do he can do.

Andrew Frerich and son Calum both have Charcot-Marie-Tooth disease (CMT), which is a group of inherited conditions that damage the peripheral nerves 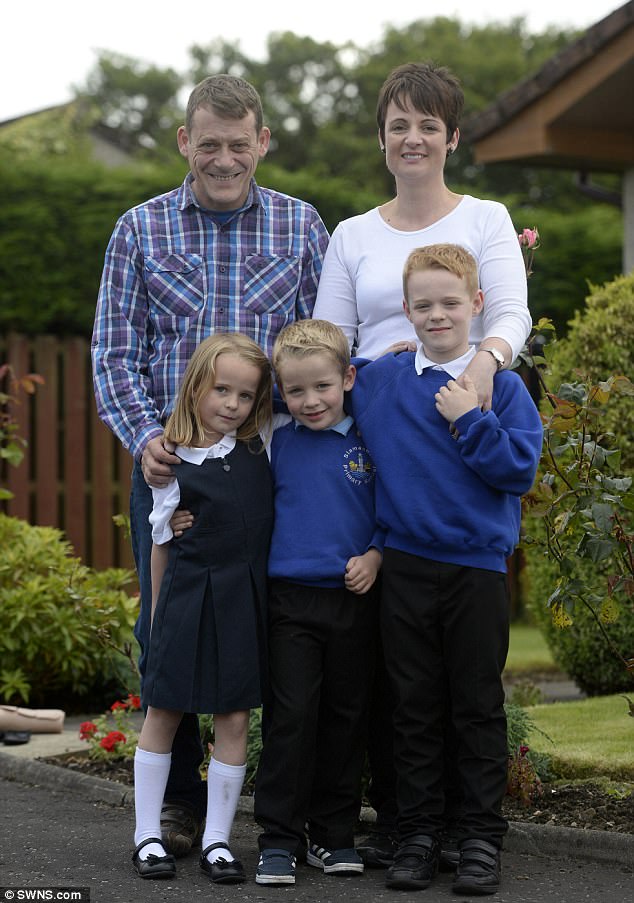 The disabled retail worker says family life is challenging as wife Alison juggles caring for him and Calum with her job as a bank manager and looking after Calum’s twin sister Amber and brother Dylan, 8

‘He could have it much worse than me, I know five-year-old boys who have it and are in wheelchairs, so we want to do as much as possible with him now.

‘He knows his legs are not good and he has legs like Daddy’s, but he doesn’t realise he has limitations, and sometimes hurts himself doing things he can’t manage.

‘He might fall over when he tries to run if he loses his balance, but he just carries on. It doesn’t hold him back.’

Now 51, Mr Frerich, from Falkirk, Scotland was diagnosed with CMT aged 11 which his sister Beth Popa, 50, also suffers from, as do her nine-year-old twins.

Day-to-day life is difficult for the family, as wife Alison juggles caring for Andrew and Calum with her job as a bank manager and looking after Amber and Dylan.

‘First thing in the morning Alison massages my legs so I can walk, and last thing at night she stretches Calum’s muscles,’ said Andrew.

‘I can’t open simple things, like packets of ham, or cartons of milk, I can’t put tokens in trolleys at supermarkets, I can’t even tie my own shoe laces. 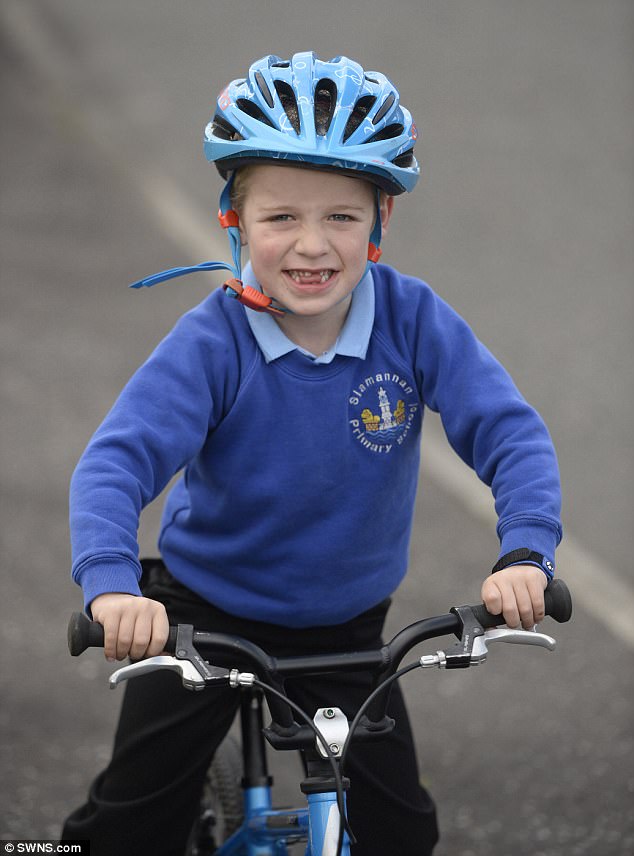 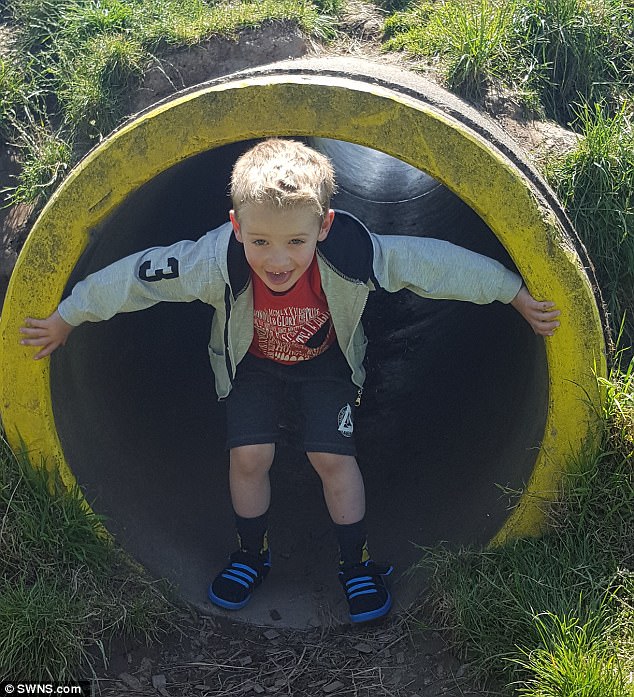 ‘When the boys play football and their lace comes undone, I need to ask someone else to tie them.’

The father-of-three finds it difficult to sit on the side lines as he is not always able to do things with his children.

‘Calum loves to go swimming. People with CMT might not be able to walk very well but we can swim,’ he said.

‘However I can’t walk from the changing room to the pool – it’s just physically impossible because of the way I walk on my nails – walking on hard flooring is agony.

‘So he goes swimming with his mum or grandparents. 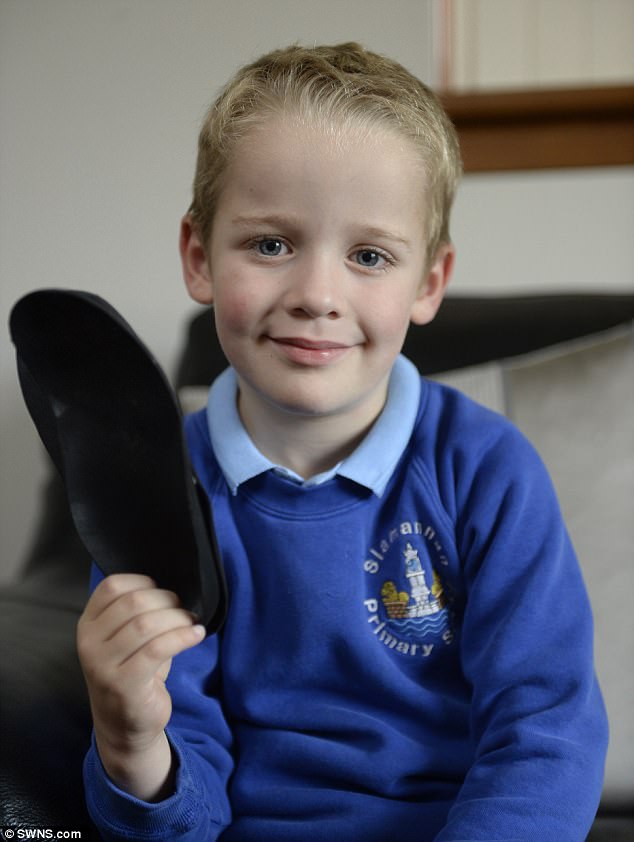 WHAT IS CHARCOT-MARIE-TOOTH DISEASE?

Charcot-Marie-Tooth disease (CMT) is a group of inherited conditions that damage the peripheral nerves.

The peripheral nerves are found outside the main central nervous system (brain and spinal cord). They control the muscles and relay sensory information, such as the sense of touch, from the limbs to the brain.

People with CMT may have:

The symptoms of CMT usually start to appear between the ages of five and 15, although they sometimes don’t develop until well into middle age or later.

‘Going out and about and going on holiday are the biggest nightmares for me. I need to look at what things we can’t do, rather than things we could.

‘Alison wants to go to Spain, and all go to a water park, but I won’t be able to do anything with them, I’ll just be sitting spectating.

‘I would love to be able to take part with them like every parent would. I want to play football with my boys and run around with them but it’s just not possible.’

Mr Frerich says school life was very difficult for him and hopes Calum will have a better experience.

‘My school was very physical, sports-orientated school and I struggled a lot,’ he said.

‘I would fall all the time and couldn’t run or kick a football like the other kids did.

‘I liked sports, but because I had CMT I couldn’t keep up and I was picked last for teams, which did nothing for my self-confidence.’

The condition forced him to give up all of his hobbies – fishing, snooker and riding his motorcycle – and his job as a chef after it became too dangerous working in a kitchen with his disabilities.

But then he went back to university and got a business degree, and now work in the retail business in Glasgow. 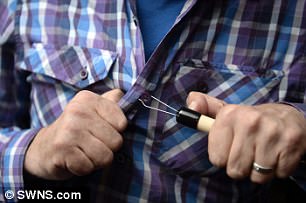 But gadgets are helping Mr Frerich carry out simple day-to-day tasks and giving him a new lease of life.

Andrew would be completely unable to walk without the support of Silicone Ankle Foot Orthosis (SAFOs).

The revolutionary technology works by supporting the front of his leg down to the top of the foot, helping him to lift his foot during walking.

Mr Frerich now uses a specialised set of cutlery as his dexterity problems mean he struggles to pick up and use ordinary ones.

Unable to grasp zips or do up buttons, he also has devices that help him when he is getting dressed.

The charity Charcot-Marie-Tooth UK supports people with the disease or those who are suspected of having the condition but haven’t been diagnosed yet.  To donate to their cause visit here.