By Neil Sears for the Daily Mail

The hopes of the nation rested on her when she was the flagship of the British fleet sailing to rescue the Falklands from Argentina.

But now the veteran aircraft carrier HMS Hermes has reached her final destination – the breakers’ yard.

Construction of the ship began when the Second World War was still raging, and she launched in the year the Queen was crowned.

Hermes had been on the verge of retirement when she was suddenly called in to service, coming under Exocet missile attacks as she headed the Task Force to the South Atlantic in 1982.

Farewell: Veteran aircraft carrier HMS Hermes heading to the breakers’ yard in Alang, Gujarat, to be broken up for scrap

It was from her deck on May 1 that year that BBC newsman Brian Hanrahan memorably told the relieved public of an early Sea Harrier air attack on the Argentine invaders: ‘I’m not allowed to say how many planes joined the raid, but I counted them all out – and I counted them all back.’

Four years after the conflict, Hermes was sold to the Indian navy, renamed INS Viraat (‘giant’) and helped mount a blockade on Pakistan in 1999.

Now, 67 years after she took to the waves, the elderly aircraft carrier has sailed to a giant ‘ships’ graveyard’ in Alang, Gujarat, to be broken up for scrap.

Plans to refit the Hermes as a luxury casino and hotel in the Bay of Bengal, with a swimming pool and even a golf course taking the place of Harrier jump jets on the runway, fell through.

Likewise, schemes to make her a museum or a sunken diving centre came to nothing, and a crowdfunding bid to bring her home to England failed.

She is now a long way from her origins at the Barrow-in-Furness shipyard in Cumbria.

When work began, she was supposed to join the fight against Hitler, and was going to be HMS Elephant, until the crushing of the Nazis put construction on hold. 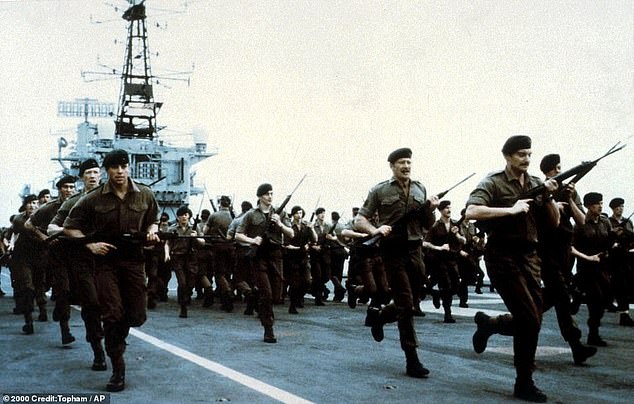 She was the flagship of the British fleet during the Falklands war. Pictured: Marines train on the deck of the HMS Hermes in 1982

By 1966, there were complaints that Hermes was outmoded, and she was almost sold to the Australian navy.

Vertical take-off Harrier jump jets gave her a new lease of life, assisted by a ‘ski-jump’ take-off ramp added to the deck.

It proved vital in retaking the Falklands from Argentina.

In the conflict, Hermes carried up to 21 Harrier jets, five Sea Kings and two Lynx helicopters.