The first of four police officers killed last week will be farewelled on Thursday by a handfull of friends and family.

All three will take place at the Victorian Police Academy in Glen Waverley and be live-streamed to family, friends and colleagues who cannot attend.

Colleagues carry Constable Rodney Miller’s coffin at the funeral service in 1998. Police lined the road for more than a kilometre to honour him in death

Sergeant Gary Silk and Senior Constable Rod Miller were gunned down in Moorabbin in 1998. Police lined the streets for more than a kilometre to farewell them

The funeral for Senior Constable Josh Prestney will take place at Xavier College on Monday.

Shattered Australians hoping to join in the live stream will be denied access after a request by the families for privacy.

The media has also been banned from attending the services and denied access to the live stream.

Police media spokeswoman Beck Angel has told media outlets no-one will be talking to them about the services either.

‘The families have all confirmed they do not want media to have access to the funeral vision, nor do they want media covering detail from the private funerals,’ she said in a statement on Tuesday.

‘They have also made it clear they do not wish to be contacted by media before or after the funeral.’

Instead, the public may get a chance to see the hearse being driven out of the police academy.

Police command has supported the private services and have committed to holding a public memorial as soon as possible.

‘We understand and appreciate the public interest following this incident and you can be reassured we will provide media with filming opportunities on the day of each funeral in line with the families’ wishes,’ Ms Angel said.

The private services are a far cry from those that have come before it.

When a policeman falls in the line of duty, there is little their heartbroken comrades can do but send them off in style.

When Sergeant Gary Silk and Senior Constable Rod Miller were gunned down in Moorabbin – southeast of Melbourne – in 1998, police lined and marched the streets in their honour.

At Sergeant Silk’s service at the Police Academy, then police commissioner Neil Comrie was the first to salute as the coffin passed the Honour Guard of thousands of police that stretched for more than a kilometre.

It was a similar scene 10 years earlier when Constables Damian Eyre and Steven Tynan were gunned down in Walsh Street, South Yarra, in 1988.

Last week’s fallen officers will receive no such tribute on their final journey to their burial plots.

All four were killed when the driver of a refrigerated chicken truck ploughed into the them on Wednesday, killing them all.

It has not been lost on Victorian police officers that one of the officers, Senior Constable Taylor, was allegedly afforded little dignity as she clung onto the last minutes of her life.

Richard Pusey, 41, allegedly taunted her as she lay dying and crying for help after being hit on the Eastern Freeway.

‘All I wanted to do was go home and have my sushi,’ he allegedly said as he filmed her on his phone.

Mohinder Singh Bajwa, 47, has been charged with four counts of culpable driving over the deaths. 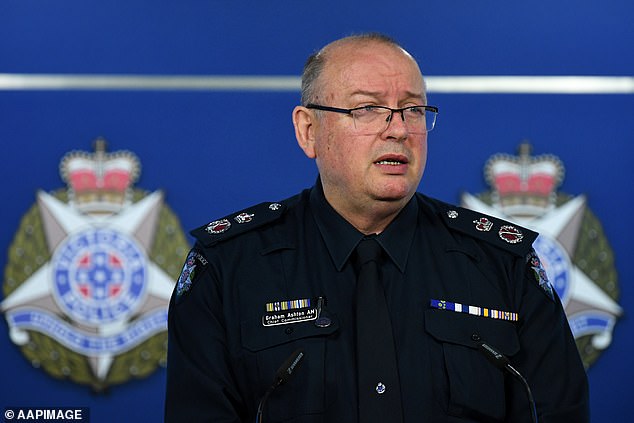 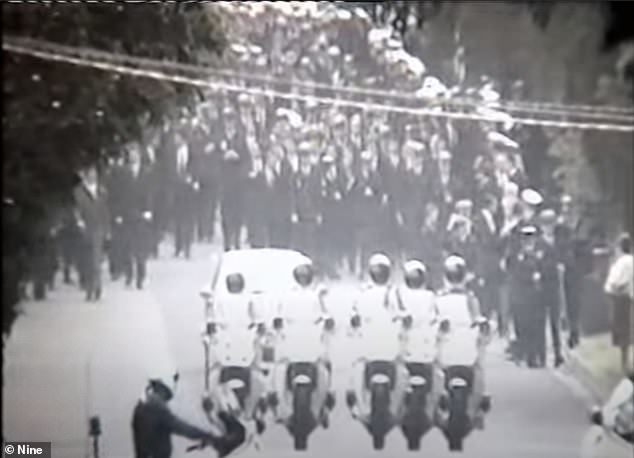 He added insult to injury on Monday during a courthouse whinge where he complained about his own depression.

Police will not be able to right the wrongs of that indignity any time soon.

Victoria Police Chief Commissioner Graham Ashton said due to the coronavirus gathering restrictions, the four officers would be farewelled in small gatherings limited to 10 people.

‘I don’t think all of them (will be held at the Police Academy), but most of them,’ he said.

In different days, police would have flocked to the Police Academy at Glen Waverley to pay tribute to their colleagues.

Instead, those not working will likely be forced to watch the services live on Victoria Police’s Facebook page.

Like the dedicated members he leads, the chief said he was desperate to attend the funerals himself even in a limited capacity.

‘It’s been a week like I’ve never experienced in 40 years of law enforcement,’ he said.

Mr Ashton said it would depend on the numbers attending whether he could even attend the funerals in person.

‘It will just depend on how many family members need to go and stay within the limits. If it’s at all possible, I’d like to be there,’ he said.

‘It may be that I may have to be joining everyone else in terms of watching it on a streaming service or it might be I could attend beforehand to say a few words privately and then leave.’

It remains unclear what role the chief will play in the upcoming services. 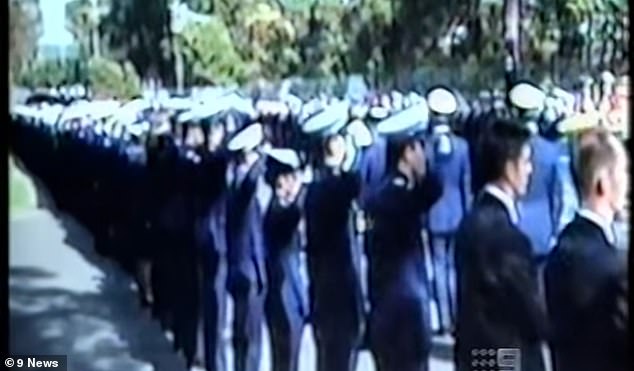 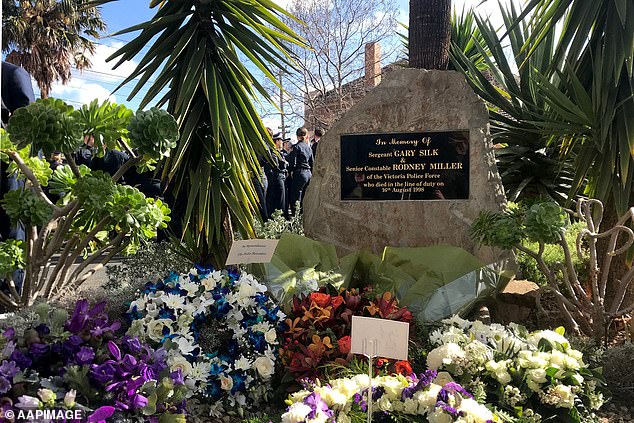 Floral tributes are seen at a memorial for two Victorian police officers killed in the line of duty 22 years ago. Sergeant Gary Silk and Senior Constable Rod Miller were gunned down in Moorabbin in 1998. Police lined the streets for more than a kilometre to farewell them 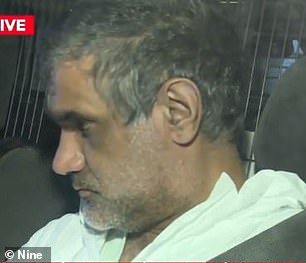 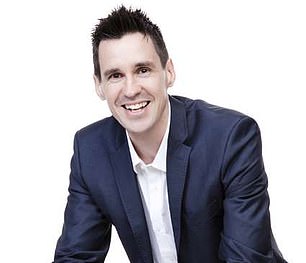 Mohinder Singh Bajwa (left) is accused of killing the four police officers after crashing his truck into the emergency lane of a Melbourne freeway. Police had just pulled over alleged mongrel Richard Pusey (right) who is accused of filming and taunting a dying police officer

Mr Ashton said the dead officers would be honoured in full once the distancing restrictions were lifted.

‘We’ve got to stick at it at the moment. We’ve got to make sure that we’re still doing the right thing so that we don’t encounter reinfection rates that make this an even more tragic emergency than it already is,’ he said.

Mr Ashton said he could not provide a date or a month as to when the formal ceremonies would be held.

One thing is for certain, Victoria Police has no intention of allowing the deaths of the four officers to be lost in the minds of Victorians amid the daily chaos.

‘One thing I am determined is that it is as soon as we can. I don’t want any big delay. As soon as it is possible to do something – significant, meaningful – that people can attend, I intend that we do that,’ he said.

‘As soon as it’s possible, we’ll have the plans in place and we’ll get the go button, get it done as soon as we can.’

‘The one that really tears me up is how many people have had to deal with loved ones who have passed away and have had to go through with funerals with so few people,’ he told Sky News. 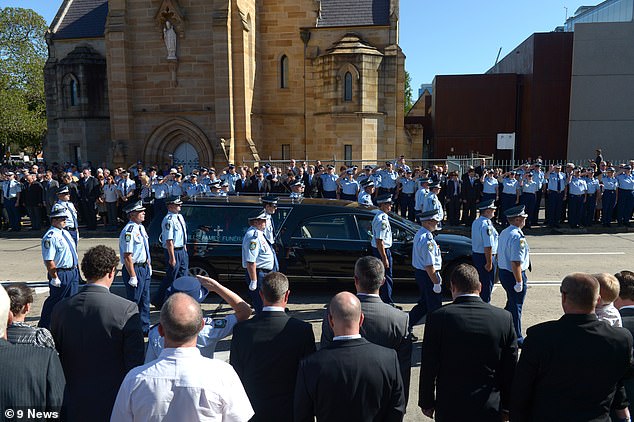 Victoria Police line the streets and salute their fallen comrade in 1998. They will be unable to do so for four police officers killed last week