Cancer treatment centers are using testimonials from patients who made unusual recoveries to draw in new patients with false hope for longer survival times, a new report suggests.

There are over 1,200 accredited cancer treatment centers in the US, and more than 1.7 million new cases diagnosed each year.

Cancer patients – especially those facing grim prognoses – spend as much as $280,000 in the first five years after they are diagnosed, so cancer centers are as eager to draw in patients as patients are to find the best treatment.

The Federal Trade Commission (FTC) requires that medical advertising set realistic expectations for treatment outcomes, but many advertisements do exactly the opposite, a new Truth in Advertising report has revealed.

We can’t help but be moved by stories of people who beat the odds – especially when their lives are at stake.

Patient testimonial ads like Cancer Treatment Centers of America’s, featuring a rare survivor of pancreatic cancer, are ‘deceptive’ and against the Federal Trade Commission’s guidelines, a new report claims

Stories of amazing recoveries are compelling, but even with the best, most cutting edge (and expensive treatments) for the most deadly cancers, these tales are hardly representative.

But cancer centers offering these treatments would have you believe otherwise.

The FTC’s guidelines allow companies, including treatment centers, to use consumer (or, in this case, patient) testimonials or endorsements.

It requires that these experiences either be representative of what a consumer or patient can generally expect.

If the testimonial is exceptional, ‘the advertisement should clearly and conspicuously disclose the generally expected performance,’ the FTC’s guidelines say.

Truth In Advertising (TINA) investigated the advertisements of 50 highest-spending cancer centers of 2017 for their scathingly titled report, Cancer Care: The Deceptive Marketing of Hope.

Cancer centers have in general been spending more and more on advertising in recent years. Since 2005, spending has increased from $54 million to $173 million.

The top spender that TINA looked at was Cancer Treatment Centers of America (CTCA), which spent $69 million on ads in 2017 – nearly as much as the other 49 centers the organization assessed combined.

And it was one of the 43 centers the TINA determined was deceptive in its marketing.

She tearfully recounts the two-month prognosis she was given by doctors with ‘no compassion.’ 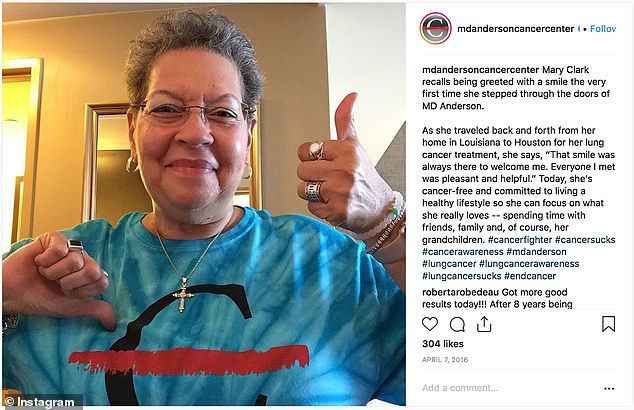 MD Anderson’s Instagram ad does not explain that the odds of a lung cancer patient being cured, as Mary Clark was, are very low, with only five percent of most patients living five years

Then, she says, a CTCA oncologist told her ‘you have no expiration date.’ The words appear in bold across the screen.

A narrator tells viewers that they can learn about treatments they ‘may not even know exist’ by calling CTCA.

As Peggy begins her story, a toothless, but legible disclaimer is displayed at the top margin of the video: ‘No case is typical. You should not expect to experience these results.’

That might have made muster under the FTC’s earlier guidelines, but doesn’t cut it in light of the 2009 revisions, according to TINA’s report.

That these results can’t be expected is an understatement, to say the least. The five-year survival rate for all stages of pancreatic cancer combined is just seven percent.

But nowhere in CTCA’s ad is that statistic mentioned.

Ads like that one are ‘a legal vehicle, however, if you are going to advertise direct-to-consumer, you have to take into account that you are marketing to an incredibly susceptible population,’ TINA’s executive director Bonnie Patten told Daily Mail Online.

‘And [CTCA and other cancer centers] have not complied with the law in that matter.’

Patten and TINA say that CTCA’s ads, as well as those from many other cancer centers, fall short of the threshold for disclosures of what cancer patients can expect from treatments.

‘They are marketing an atypical health journey and not clearly and conspicuously disclosing what a typical journey would be,’ Patten said. 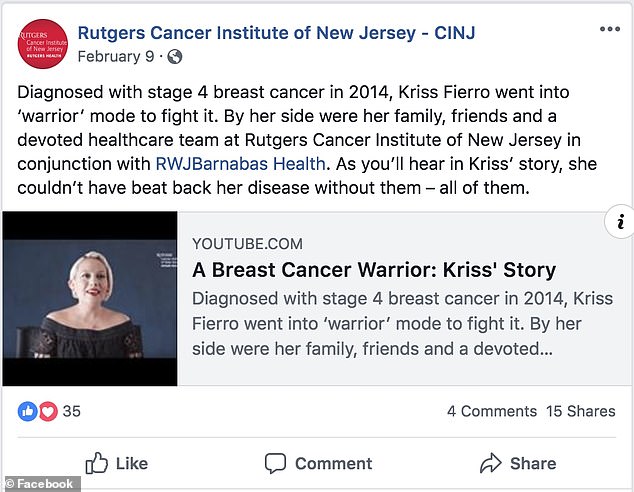 She says that facilities like CTCA could have chosen any number of ways to communicate realistic expectations to consumers, but ‘it shouldn’t be hiding in the fine print.’

‘The consumer has to be able to see this necessary information very easily and readily.’

All of the ads TINA assessed dealt with cancers for which the survival rate was under 50 percent, Patten explained.

Rutgers Cancer Institute posted a video of Kriss Fierro who ‘beat back’ stage four breast cancer after her 2014 diagnosis.

It’s unclear what exactly ‘beat back,’ means, but Kriss is still alive.

The five-year survival rate for her cancer is 22 percent.

An Instagram post from MD Anderson Cancer Center features Mary Clark, whom it says is ‘cancer free’ after being treated there for lung cancer.

But only 16 percent of patients get diagnosed early, before lung cancer has spread.

For everyone else, the five-year survival rate is just five percent.

In total, TINA flagged 130 of CTCA’s ads as guilty of deceptive marketing.

CTCA did not respond to Daily Mail Online’s request for comment, but TINA has filed a complaint against the cancer center with the FTC.

‘Cancer centers are using these compelling testimonials to lure patients to their facilities,’ said Patten.