Soaring vet fees are landing families with bills of up to £30,000 to treat their pet, research reveals.

Some practitioners now offer hydrotherapy and even acupuncture as procedures become more sophisticated.

As a result, experts say insurance payouts have rocketed to a record £775million a year.

The average pet insurance claim is now £757 – the highest ever and almost double the figure from a decade ago. Yet despite surging vet fees, millions of households do not have insurance cover.

Soaring vet fees are landing families with bills of up to £30,000 to treat their pets, as millions of households do not have any insurance cover despite the rising costs

Should their pet become ill, they could end up facing a bill for hundreds or even thousands of pounds for treatment. In one case last year, a dog suffering from seizures required £30,000 of treatment, according to the Association of British Insurers.

In another example a golden retriever with a fracture required £10,000 of treatment, while it cost £9,600 to cure a cat with inflammatory bowel disease.

In total, insurers paid out around £2million every day to cover vet bills last year, according to the trade body’s figures.

The number of claims also surpassed the one million figure for the first time since records began. The average claim was £757, up from £386 in 2007. For dogs the average figure was £763, compared to £594 for cats.

A survey by the Society for Practising Veterinary Surgeons last year found that 79 per cent of small animal vet practices had increased their fees by an average of 3.7 per cent over the previous 12 months.

Yet an estimated 67 per cent of dogs and 84 per cent of cats are uninsured – leaving around 12.4 million without cover. 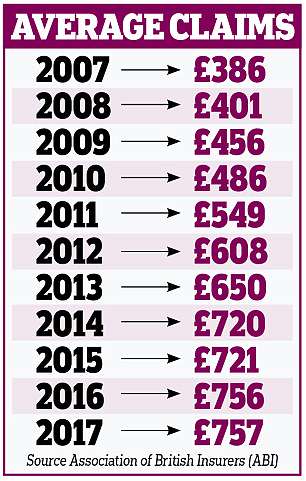 Joseph Ahern, of the Association of British Insurers, said: ‘None of us want to imagine anything bad happening to our pets, but leaving them uninsured can lead to expensive bills and unnecessary stress.

‘The fact that millions of pets still aren’t covered means that owners are at risk of having to fork out thousands to cover the costs of vet treatment because there’s no NHS for animals.’

The rise in fees has also pushed up the cost of pet insurance. The average premium is now £316, compared to £234 six years ago – a 35 per cent increase. Variations in the cost of veterinary care between regions means there is also a postcode lottery in pet insurance fees.

John Fishwick, president of the British Veterinary Association, said advances in science and technology are helping to save animals that would once have been put to sleep.

He added: ‘However, these treatments can be costly and, as with human medicine and other services, these costs are likely to be higher in emergency and out-of-hours situations when overhead costs are often higher.

‘Veterinary practices must provide an estimate of costs before they begin treatment.

‘However, it is not always possible to anticipate the full extent of the treatment required until diagnostic tests have been undertaken, and unexpected complications can arise.’