Families feel the pinch as firms including Reckitt and Heinz jack up prices by as much as 12.4% amid rising costs

In a string of updates, the owners of products from Heinz baked beans and Cadbury chocolate to Evian water and Dettol floor cleaner outlined the scale of price hikes facing customers. And worse will come as they pass on the soaring cost of doing business.

Companies face rising costs of everything from energy and staff to key ingredients such as vegetable oils as supply issues in the wake of the pandemic and war in Ukraine push up prices.

British giant Reckitt Benckiser whose brands include Dettol, Durex, Finish and Nurofen, said its prices in the second quarter of the year were 9.7pc higher than a year earlier.

Despite a huge hit to wallets around the world, shoppers have not been voting with their feet, Reckitt said. The volume of products it sold continued to increase, by 2.2pc.

US group Kraft Heinz has put up prices by 12.4pc as it navigates a ‘constantly changing environment’. Chief executive and chairman Miguel Patricio said they were needed for it to manage inflation. Heinz said sales volumes dipped by 2.3pc as some customers were put off by higher prices.

The updates came a day after Unilever said it had raised prices 11.2pc, with a warning of more to come. It lost some customers to own-brands rivals as shoppers traded down to cut their bills.

But the hikes still helped it to its fastest quarter of sales growth in more than a decade, with overall sales up 8.8pc from a year earlier. The update also helped shares hit a ten-month high, but they fell back slightly yesterday by 0.9pc, or 36.5p, to 3995.5p. 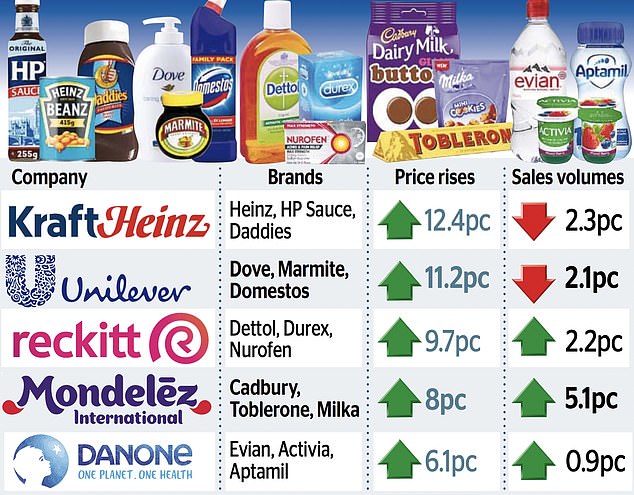 Meanwhile, Cadbury’s US owner Mondelez said it has pushed up prices 8pc and French firm Danone, which makes Evian and Activia, said it has jacked prices up by 6.1pc.

All this comes as consumers face their own rising energy bills, higher fuel bills and rising interest rates. Heinz’s update came weeks after it resolved a row with Tesco over the grocer’s refusal to pass on its price rises to customers.

Products including ketchup, beans and spaghetti hoops started disappearing from shelves as orders were put on hold during the dispute over increases Tesco called ‘unjustifiable’.

Reckitt yesterday hailed a stand-out performance in its nutrition arm. It has also become the biggest player in the US baby formula market, and benefited from the return of cold and flu as people started mixing again, sparking demand for its products.

Reckitt expects like-for-like net revenue will rise between 5pc and 8pc in the financial year. Chief executive Laxman Narasimhan said: ‘We have delivered an excellent first-half performance in 2022.’