The long-awaited inquests into the deaths of 21 people in the 1974 IRA Birmingham pub bombings have begun with a minute’s silence for the victims.

Coroner Sir Peter Thornton QC told jurors they would hear evidence of how the two bomb blasts ripped apart two pubs on what was a ‘perfectly ordinary evening’ in Birmingham.

He said there would be evidence alleging British security forces may have had some forewarning about the attacks, widely thought to have been carried out by the Provisional IRA, including an ‘overheard’ conversation which took place in prison two weeks before the bombings.

But, he said, the inquests would not deal with the issue of who planted the bombs, adding that was a ‘task of police, prosecutors and the criminal courts’.

Julie Hambleton, whose sister Maxine was 18 when she was killed in the Birmingham Bombing, hopes the inquest which begins today will provide some answers after 45 years 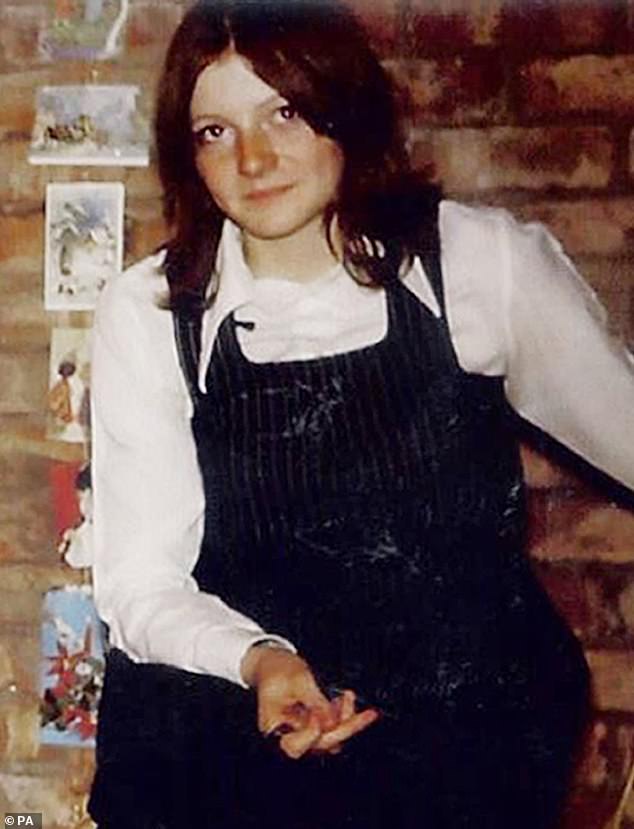 Last year Sir Peter won a legal appeal to prevent the inquests incorporating the question of accountability, arguing it was not his job to investigate who was responsible for the two bombs, which killed 21 and injured 220 people.

He told jurors this morning that while the matter would be dealt with in a single hearing, which he anticipated would last up to six weeks, the inquests would deal with ’21 separate people, 21 separate lives lost from two terrible events’.

As well as those killed, 220 were injured in the blasts, which were carried out at the height of an IRA bombing campaign in the West Midlands, the jury was told.

A third bomb was planted near the Barclays Bank on the Hagley Road but failed to properly detonate that night.

The coroner said that there had been ‘over 50’ incidents involving bombs and incendiaries ‘in and around Birmingham’ in 1973 and 1974, but that after the pub blasts ‘the campaign in the West Midlands stopped’.

He told the six women and five men of the jury it would be a matter for them whether the IRA called off its Midlands campaign because of the ‘outrage of civilian deaths on this scale’ or ‘some other reason’.

Sir Peter said: ‘This is something that the city of Birmingham has suffered now for many years.

‘While the inquests will inevitably focus on those who died we must also remember many other lives were and continue to be affected.’

Jurors, sitting at Birmingham Civil Justice Centre, were told they would hear evidence from only a few eyewitnesses of those there on the evening, because some were ‘no longer alive’.

He added: ‘They will be doing their best to recollect events accurately, but we all know memory will sometimes have gaps.

‘Recollection may sometimes be distorted or inaccurate, it may be correct.’

Sir Peter said ‘nobody has been successfully prosecuted for the attack’, and that the only men ever to stand trial, the Birmingham Six, were freed on appeal in 1991.

He also said: ‘Nobody is on trial here, an inquest does not decide matters of criminal or civil liability, and this is not a question of attributing blame to any individuals.’ 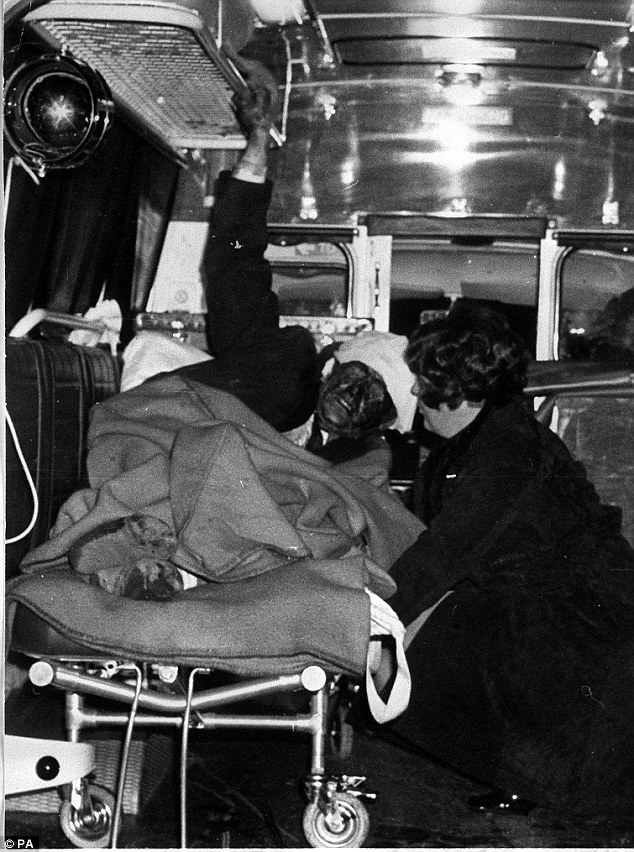 A man grips an ambulance bar in pain. The blasts injured 220 people 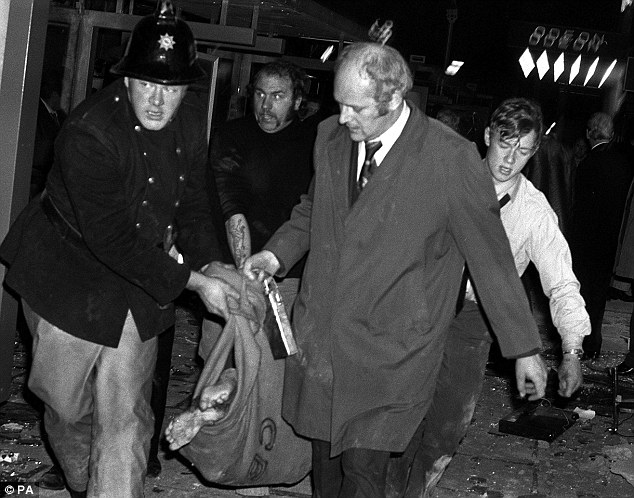 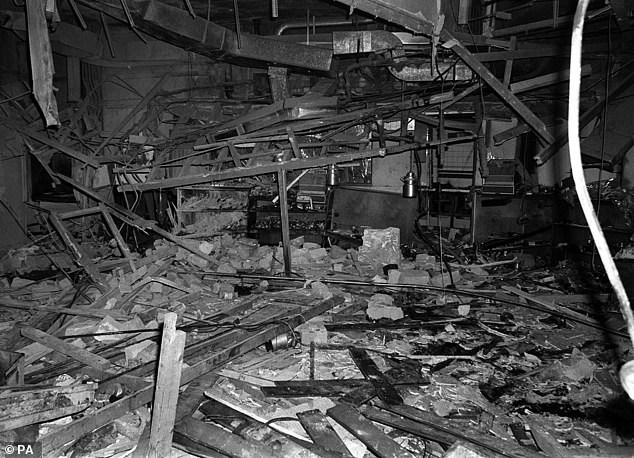 He told jurors ‘who may well be wondering, “why now?”‘, that the original inquests were put aside in 1975, with the start of the six men’s criminal trial.

The former chief coroner for England and Wales added there would be details of the so-called ‘forewarning issue’, and evidence the British authorities may have received information signalling there were to be bomb attacks.

Relatives of the victims have been waiting for decades to find out officially what happened to their loved ones.

Inquests were opened but never resumed after the 1975 conviction of the ‘Birmingham Six’. They were freed in 1991 after evidence of a botched police investigation and no-one else has been charged. In 2011, campaign group Justice4the21 was launched, calling for a public inquiry into the bombings.

In 2016 coroner Louise Hunt said the inquests could resume but Sir Peter Thornton QC later said identifying the culprits would be ‘unlawful’.

Bereaved families fought a legal battle against this but last September the Court of Appeal upheld his decision.

Among them, evidence of an alleged tip-off concerning a ‘possible conversation in a local prison nearly two weeks before the bombings’.

Jurors would also hear an account of ‘evidence of a student’s visit to a police station the evening of the bombings, which was cancelled’.

Detailing the chain of events that night, Sir Peter said that at 8.11pm, the Birmingham Post and Mail newspaper received a coded bomb warning from a man ‘with an Irish accent’ accompanied with the code word ‘double X’.

This was the code agreed at the time between the Provisional IRA and the British security services to identify a real attack.

The caller, ringing from a telephone box, spoke of a bomb in the city’s landmark Rotunda, and the tax office in New Street. The newspaper’s telephonist’s record of the message made no mention of pubs.

The two bombs detonated in ‘massive explosions’ between 8.15pm and 8.20pm, killing 19 on the night – eight in the Mulberry Bush at the foot of the rotunda, and two outside the nightspot.

Another nine died in the Tavern In The Town, which was a large pub in the basement of the same building as the tax office, King Edward’s House.

Two died later of their injuries, with 12 of the victims under 25 years old. 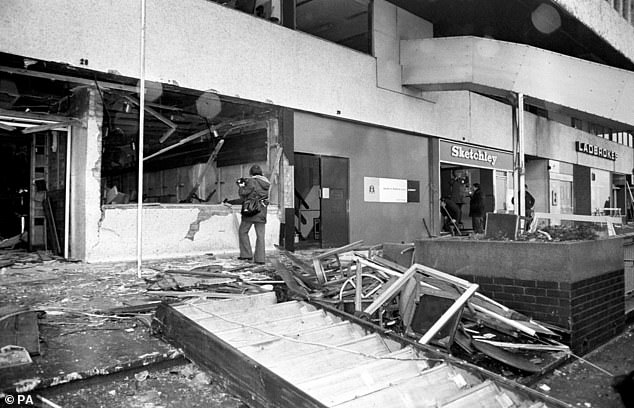 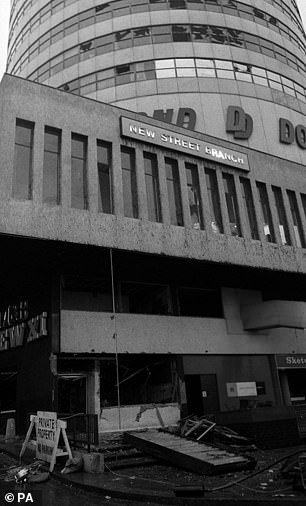 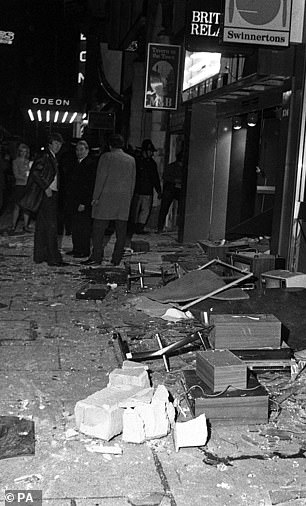 Hearings will continue on Tuesday and Wednesday with pen portraits of each of the victims, while on Thursday, the jurors will be taken to the former sites of the pubs – both long since gone.

The inquests are the culmination of years of campaigning by relatives of the dead for a full account into the circumstances of what happened on the night of November 21, 1974.

The question of identifying precisely who the bombers were will not form part of proceedings.

The IRA bombing of the Mulberry Bush and Tavern in the Town pubs was the deadliest post-Second World War attack on the British mainland, until the July 7 London blasts in 2005.

A botched investigation by West Midlands Police led to the convictions of the Birmingham Six, who were found guilty of the murders a year later.

Their imprisonment became a cause celebre for many years and one of the country’s most infamous miscarriages of justice.

Their convictions were quashed by the Court of Appeal in 1991, after the men had spent 16 years behind bars. 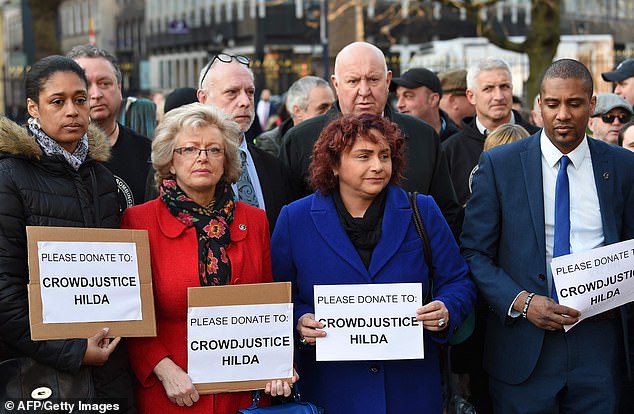 Julie Hambleton (second from left), and Michelle Sealey (left) and Paul Bridgewater (right)  whose father Paul Davies was also among those killed, gathered with other relatives in the grounds of Birmingham Cathedral in Birmingham today 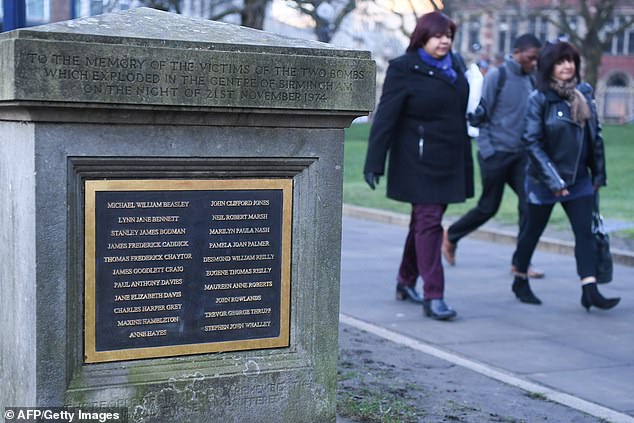 He previously ruled that the hearings will be Article 2 inquests, examining whether the British state or its agents failed to adequately protect the victims.

Julie Hambleton, whose 18-year-old sister Maxine was among those killed, will be attending the inquest.

Speaking before the jury hearings, she has said all the families of the bereaved were seeking was ‘truth, justice and accountability’.

The Birmingham Six: what was the atrocity which led to the infamous miscarriage of justice?

Until the 7/7 London bombings in 2005, the Birmingham bombings was the worst ever terrorist attack on the British mainland.

The explosions at the Mulberry Bush pub, and the Tavern in the Town, on 21 November 1974 killed 21 people and injured 220 others.

Under its own code of conduct during the Troubles, the Provisional IRA would give prior warning of bombings. Their campaign was intended to instill terror without claiming civilian lives which would undermine support for their cause.

On the evening of 21 November 1974, a man with an Irish accent called Birmingham newspapers to say two bombs were planted in the Rotunda building and in a tax office on New Street. He signed off with the then-official code word the Provisional IRA used to authenticate a warning call.

Former IRA members have since claimed the call was delayed due to damage to a nearby phonebox.

The caller did not provide the specific location of the bombs.

West Midland Police officers rushed to respond but were unable to locate the Mulberry Bush bomb before it went off at 8:17pm, killing 10 people. The accompanying bomb in the Tavern in the Town went off 10 minutes later killing 11 people.

A third bomb that failed to detonate was found in the doorway of Barclays Bank on the Hagley Road, two miles from the pub bombings.

Last year campaigners reacted with dismay to the ruling that this inquest will not address the issue of who actually perpetrated the atrocity.

Sir Peter Thornton QC, the coroner in charge, won a Court of Appeal challenge in September, successfully arguing it was not his job to investigate who was responsible for the two bombs, which killed 21 and injured 220 people.

Julie Hambleton said at the time: ‘We feel as though we’ve been punched in the stomach again.

‘What we do, we do for 21 people who aren’t here to do it for themselves. 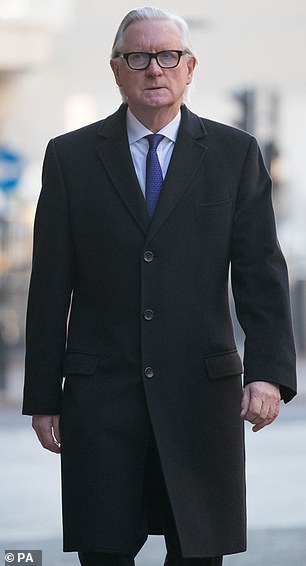 Sir Peter Thornton QC, the coroner in charge, successfully argued last year it was not for him to investigate who was really responsible for the bombings

This morning the coroner told jurors: ‘It was a normal Thursday evening in Birmingham, on November 21, 1974.

‘It was not a weekend, but the pubs, two in particular, were busy enough and both quite popular with young people.’

He added the premises were only some 50 yards away from one another.

‘At 8pm that evening, it was a perfectly ordinary evening in the two pubs, a film was showing at the Odeon cinema but just after 8.15pm, all of that changed,’ Sir Peter said.

‘They were massive explosions.’

He told jurors: ‘After hearing the evidence you may conclude the bombs were brought and planted in such a way that extensive loss of life, injury and devastation, would have been caused.

‘They were planted in enclosed spaces in busy pubs, where there were many people.

‘You may be asked to determine whether those who died were unlawfully killed.’

Last month it was announced that an inquest into the deaths of four soldiers and a civilian at a pub in Guildford the same year is to resume after 45 years.

The murders resulted in the wrongful imprisonment of the ‘Guildford Four’ who were released in 1989 and whose case was often mentioned alongside the Birmingham Six.

An IRA atrocity and 44 years of heartbreak for victims’ families

Thursday, November 21, 1974: Bombings in two Birmingham pubs leave 21 dead and 220 injured. They are said to be revenge for the death of IRA member James McDade, who blew himself up trying to plant explosives in Coventry. Hours later, five men are arrested in Heysham, Lancashire, and a sixth is arrested in Birmingham.

June/August 1975: Trial at Lancaster Crown Court. ‘The Six’ are sentenced to life imprisonment. 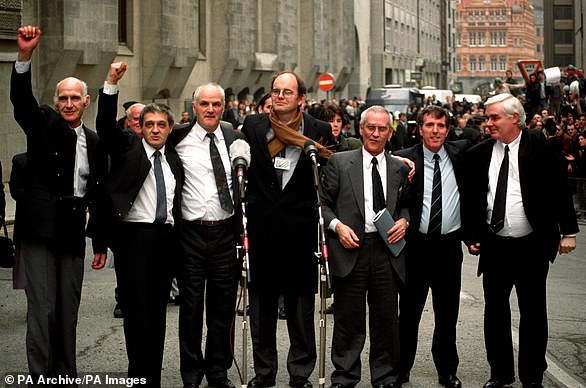 October 1985: TV’s World In Action questions forensic tests. A book is then published claiming three unnamed men were behind the bombings.

January 1987: The home secretary refers case to the Court of Appeal. The appeal is later dismissed. A 1990 TV drama then names four ‘real’ bombers.

October 1993: Perjury case against three former West Midlands police involved in the charging of the Birmingham Six is dismissed.

June 1, 2016: Senior coroner for Birmingham rules to resume the inquests. The original hearings were not continued after jailing of The Six.

September 29, 2018:  Families lose their legal battle to name those responsible for the bombings in the inquests