An especially Trivial Pursuit! Families are left puzzled on Christmas Day after opening Harry Potter board game sold by Tesco, Debenhams and WH Smith… only to find all the words in ITALIAN

Some families were left puzzled and confused on Christmas Day after they opened a special Harry Potter edition of Trivial Pursuit only discover that all the cards were in Italian.

The baffling issue affected customers all over the UK after they had bought the game from retailers like Tesco, Debenhams and WH Smith.

Taking to social media to share their baffled reactions, many highlighted how the game’s packaging was in English, leading them to assume the cards and other contents would be too.

On the outside, the Harry Potter-themed Trivial Pursuit game was in English, encouraging customers to purchase it for Christmas 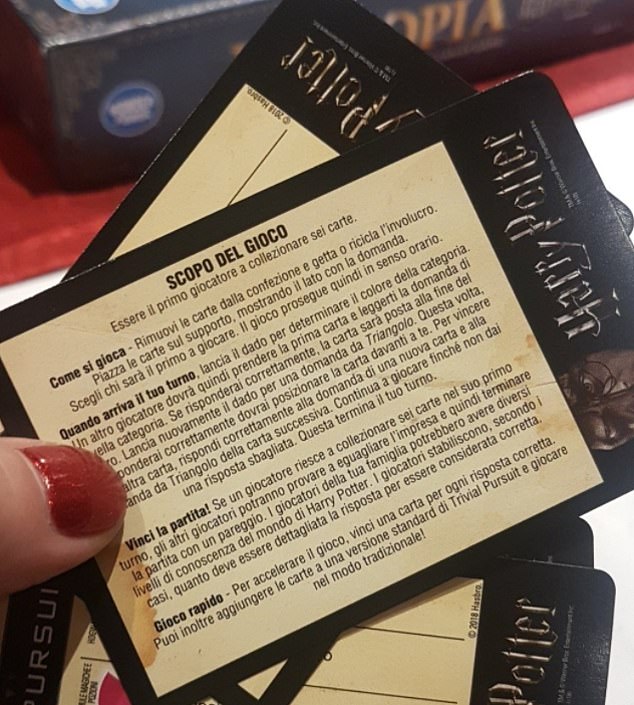 However, many were left shocked and disappointed after opening the game to discover the cards were all in Italian

It’s unclear just how many customers have been affected by the issue, though several have taken to social media to share their frustrations.

The board game was manufactured by US firm USAopoly and is on sale for between £10.99 and £12.99 at several UK stores.

Many irate customers contacted the place they bought the game from to ask how they could get the problem resolved.

A lot of them also revealed how the game was supposed to be a Christmas present for young children – leaving them disappointed. 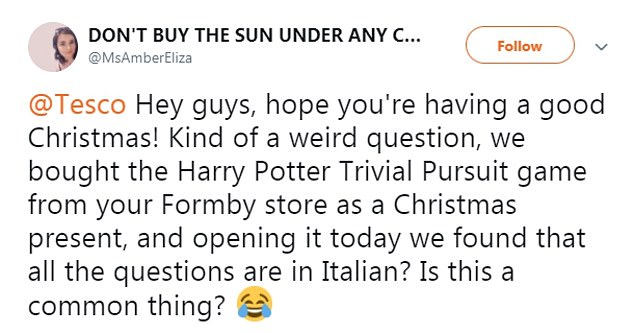 Another said: ‘[I] bought Chloe Harry Potter Trivial Pursuit questions out of Tesco and they’re in Italian, everything about the box is in English and there’s absolutely no indication that they’d be in b***** Italian man.’

A third added: ‘@Debenhams Harry Potter trivial pursuit in a different language?? English on the box though! Can we return it???